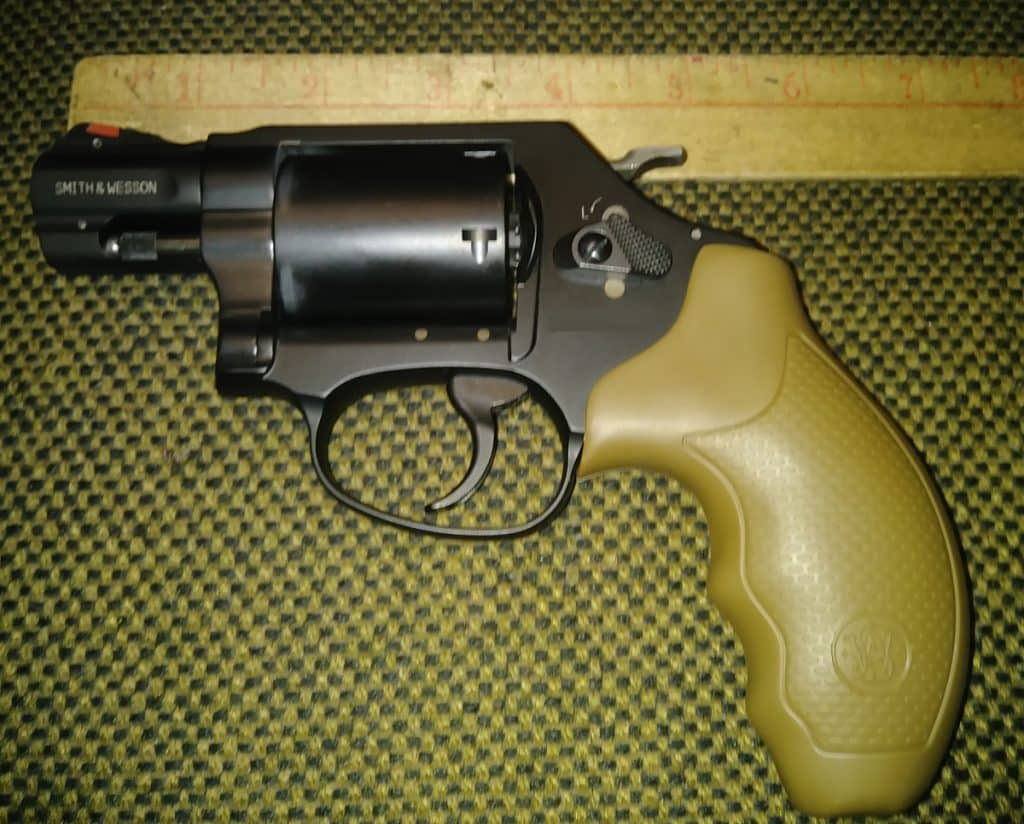 Smith & Wesson revamped its line of CCWs and one of those is the 360 in .357.  It is rated +P. This compact piece is what you’d expect from S&W’s line of lightweight snubbies, with a few changes.

The changes are slimline grips with earth tone rubber. You will appreciate this when shooting hot .357 rounds. The cylinder is not fluted. It has a PVD (Physical vapor deposition) finish. Learn more about PVD here.

The frame is a scandium aluminum alloy. Adding scandium in minute amounts makes the aluminum much tougher. It has a steel 1.88-inch barrel covered in the alloy. Sights are just a step above rudimentary with a red polymer insert in the front blade.

The hammer is exposed. So, this is not a pocket pistol. It would do very well as an ankle carry.

It has an integral gun lock and two keys in the box. The lock raises a sliver of steel, with LOCKED stamped on it, that blocks the hammer from being drawn back and the trigger from being pulled.  A cable lock is also included for an added measure of security.

It is a direct hammer strike on the firing pin.

When drawing the hammer it does have a click halfway, but that is the cylinder advancing. There’s a noticeable click when it looks into place. It does not have a half cock.

In single action, the trigger is crisp and exactly the way I like it, just enough to know you have to pull something. Hair triggers on CCWs make me nervous. In double action, it has one of the lightest pulls of snub revolvers I’ve ever shot. It’s certainly a LOT lighter than the pull on the Cobra hammerless I pack.

For the range work, I invited an assistant chief of police from one town and the chief of police in the town where the range is located. I find getting people with plenty of firearms experience to come and shoot gives me a much better review.

Recoil was stout but manageable with the .357s. As this is a backup carry, if you have to draw and use it during an emergency, you should not notice the kick. Adrenaline will take care of that. On the range, it was obvious. The rubber grips helped take some of the shock off. Put hard plastic or wood on the grip and I’ll bet you the recoil will turn into a stinging slap instead of the solid punch.

The pressure wave was surprising when shooting the .357s. It was enough to jar my sinuses, something I usually only get when shooting .50 BMG rifles. Ashburn Police Department Capt. Richard Purvis noted the same thing. It was not bad, but shooting few hundred rounds of the .357s would leave me with a hurting hand and a headache. Again, in an emergency, I’d never know it.

Capt. Purvis said he was not comfortable shooting the .357s but the .38s were enjoyable. Sycamore Police Chief Bill Ryder said if he was going to carry the 360 – he liked it so much, he’s going to get one – he would carry .357 rounds. The difference in recoil, to him, was not as significant as it was for me and Capt. Purvis.

Thus, the reason for having more than one shooter help with the test drive.

I would love to see a comparison review between the S&W 360 and the Ruger LCR 357.

Throw in the Taurus 605 for S&Gs. It would be interesting to see if the extra dough gets that much better of a pistol. I remember when Ruger was the value line, but they’ve crept up to S&W prices, although S&W isn’t what it used to be.

Paul Harrell did a couple videos on the .357, one with a snubbie. Interesting take. While it doesn’t have the capacity of an auto, it is more powerful than a 9mm. He also showed that even in purse carry the revolver fired, so not being a pocket pistol? Well, you be the judge. 🙂 I was surprised at how well the green and white box remington ammo worked too. I’d use that in the 357 before the SD stuff.

how many actions was it again.?
Did they leave off the loading gate.?
Yes,
357 will massage the sinuses.!