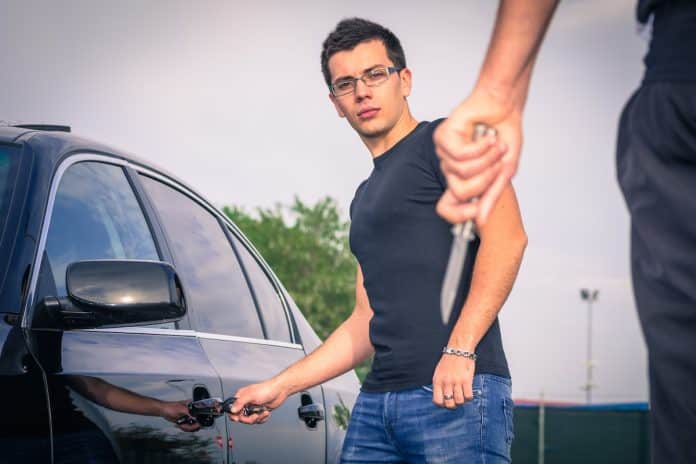 A knife fight is an idiot’s game. It involves extreme close quarters, and because of our conditioning with TV and movies, people are generally more reckless and silly. Getting stabbed with a knife isn’t the end of the world unless it directly hits your heart, brain, or critical arteries and organs. The chances of that are slim if you remain in a good guarded posture or stance.

Your chances of getting hurt in a knife fight rise precipitously fast when you do any of the following:

There are three basic knife maneuvers:

Your chances of parrying are slim. Focus on slicing and stabbing. Slices open up flesh and can sever nerves, arteries, veins, or even just capillaries. Muscle tissue can get sliced, limiting your opponent’s movement.

Stabs are much more committed moves. It involves sticking the blade of your knife into your opponent. This is pretty ineffectual unless you hit a vital organ or nerve center. However, if you do manage to get your knife stuck into your opponent, make sure to twist so you can open up the wound channel. The more blood comes out, the less effective your opponent will be.

Do not confuse a wounded opponent for a defeated one. A wounded animal is still just as dangerous as before. We’ve outlined five basic tips regarding knife fighting with the hopes you never need them.

Give up the notion of a bloodless fight

If you and your opponent both have knives, there’s going to be blood drawn. Your goal is to survive. Most knife fights don’t end with death, but you can still be significantly injured or maimed. Also, because it’s an attacker, don’t assume he’ll slice you a couple of times good and take mercy.

Fight for your survival and fight to survive

In a knife fight, your job is to neutralize your opponent. If he scares easily and runs — great. Don’t expect it, though. The exterior of your arms and legs are your only natural armor not provided by fabric. Don’t pay attention to your wounds and don’t get distracted by either your blood or his being drawn. You’re in this fight to win, and there’s no good alternative.

Don’t go for the deep shots

In movies and cinema, the protagonist always finds some grand opening into which he plunges his dagger triumphantly. If you do this, you’re an idiot. The most critical parts of a person’s body — the chest, upper thigh, abdomen, and throat are all extremely well defended. Often, an attacker may even leave those areas open hoping you make a move.

Keep your body tight and guarded

Do not overextend the arms and legs. Anything left dangling can and will be cut. Use the exterior of your forearms and arms to guard your critical regions (face, neck, chest, abdomen, groin). Use short, quick bursts to strike and then retreat. Keep moving at all times and never make a committed lunge — win your fight by degrees. A knick here, a slice there will gradually wear down your opponent’s resolve and hopefully give you an avenue to strike more critical cuts.

Any exposed area or surface of your opponent’s body is fair game. A successful strike is anything that breaks the skin. Just the sight of a person’s own blood can reinforce the reality of the situation and prompt a move to flight.

As a last note: always attempt to get an improvised weapon that’s longer than the reach of your opponent and his blade. A stick, a mop handle — whatever it is — the more distance you can put between you and your attacker (or force him into a compromised position) the better.

A feint is a ruse. It’s an attack that you are not committed to, but you want your opponent to commit to defending against. The easiest feint in a knife fight is a quick stab towards the face. This forces your opponent to move his face back and expose his abdomen. You can also feign for less critical parts of his body.

A feint requires you to extend past your guard. This is extremely dangerous. With a small pocket knife, don’t bother. If you’re fighting with a longer, improvised weapon such as a stick or similar, this is ideal. Your opponent has a bladed weapon, but if you can outreach him, you can force his face back. Then you can make a superficial slash with your knife.