The Right Way To Use Laser Sights for Concealed Carry 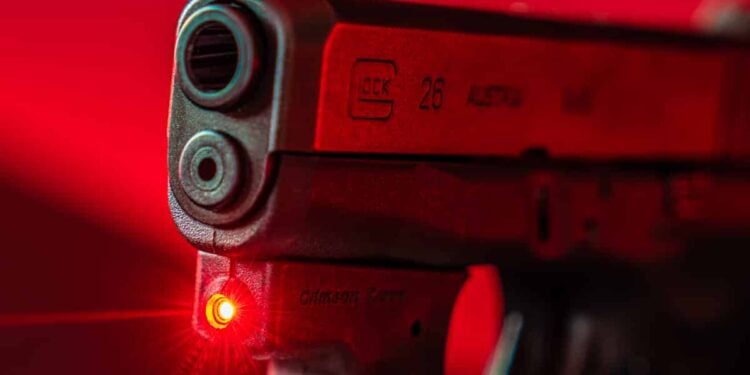 If you want a lazy shooting method, learn to point shoot. It isn’t perfect, but it works at close range.

Maybe that’s you. Perhaps it isn’t. However, since laser sights aren’t without value – they’re great for people with aging eyes and low-light environments – let us consider how to use laser sights properly.

Proper Use Of Laser Sights

Most people who have laser sights, in my experience, basically use them to ignore the sights. Put the dot on target, pull the trigger; point shooting for the digital age.

If you don’t, you’ll see a dot on the target that’s offset from the point of impact, which means all you’re doing is adding a laser and using Kentucky windage, and that’s using less brains than a scrambled turnip.

A properly calibrated laser sight will enable you to place your shot in an area of a few inches of point of aim inside a given distance. Essentially, a properly zeroed laser is a fast sighting, maximum point-blank range shooting tool, as that’s what you’re setting with the laser.

Ultimately, what you’re setting is essentially a maximum point-blank range with the laser. The bullet will land within a known area around the point of aim inside at a given distance.

It’s sort of like how hunters will zero their rifles for the least amount of holdover. Let’s say you zero a hypothetical .30-06 rifle at 200 yards with a 180-grain bullet. The bullet won’t land more than 2 inches above or below the point of aim out to 300 yards. (Depending on the bullet and loading.) If a deer, elk, or hog appears in the scope within that distance, the shooter doesn’t have to hold over the vital areas to deliver the shot anywhere within that range.

A laser can enable you to do the same with a defensive pistol at combat distances, even in poor lighting conditions, if properly calibrated. Get on target fast, deliver the shot around where you want to fast. It’s not the utmost in precision, of course, but for combat shooting…darned if it won’t work.

Laser Sights, Geometry, And You

A laser emits a beam of light from a fixed position, projecting forward from that position to the furthest distance it’s visible. However, the bullet leaves the barrel and follows a parabolic arc, rising and then falling as the force of gravity saps velocity.

Now, the laser sight is obviously offset from the bore. If you have laser grips, it’s offset horizontally and vertically. If you use a guide rod laser, trigger guard, or rail-mounted laser, the offset is vertical.

With an adjustable laser, you can zero the laser’s point of aim to the point of impact. However, this is where things get complicated.

Zeroed at a longer distance – say out to 50 feet – you get an accurate placement at that distance. But the dot won’t be visible until you’re almost to the distance you’ve zeroed at, which defeats the purpose.

Before you zero the laser, you need to decide what range you think you’ll use the pistol in. Pistol combat distances tend to be within 20 yards, and most shootings occur within 7 yards.

What you want to do is set elevation and windage (if necessary) so that the laser is visible over your sights at what you believe to be the likely combat distance you’ll use the pistol at.

Now, the point of aim will climb after that. But the point of impact will be within the same distance of the offset to double that distance.

Okay, so your bore is fixed, pointing straight ahead. Let’s say you have a Crimson Trace LaserGuard, which is offset by about 1.5 inches below the bore, but – if you adjust elevation – is pointing at an upward angle.

If you adjust windage and elevation, so your laser is zeroed to the point of impact at seven yards, the laser will appear higher on the target when you get out to 14 yards. But your point of impact will be 1.5 inches under the point of aim, the same amount of the offset.

However, there is an additional catch. The dot will not be visible closer than the distance you calibrate the laser to. So you’re going to have to find what distance you think you need to set the laser to. Most defensive shootings occur at seven or fewer yards. So you’ll have to make up your own mind as to what that distance should be.

Once calibrated, it’s an effective tool for getting shots on target fast. If not, you might just be enabling your own laziness.

If you are shooting with both eyes open as is the preferred method. The claim that “the dot will not be visible” at a certain distance is not true in my opinion. Having shot with IR lasers this is even more true. As you typically do not present the sight in front of the head-mounted NVG device allowing a clear view of the dot. Offset is a given even with “iron sights” on an AR at close range