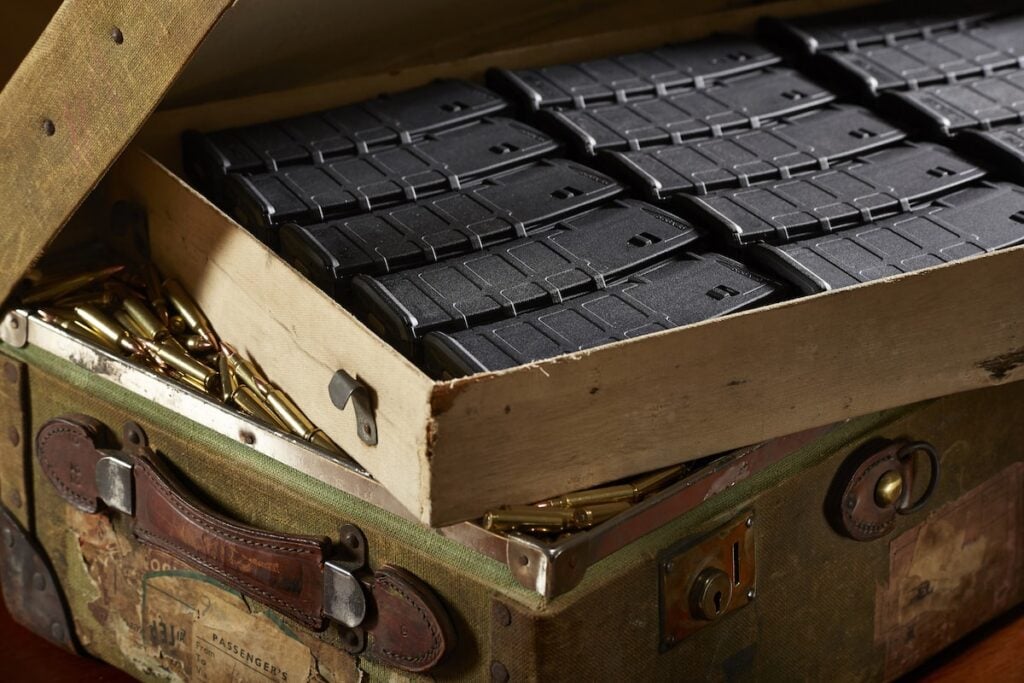 There’s a little trick I’ve learned in my career as a gun writer: when in doubt, kick over a hornet’s nest–at a minimum, you’ll get an article that will start some conversation. Having flipped through a few online forums whilst doing the research for this piece, it’s pretty clear that magazine storage is one such topic.  The central question is, was, and will likely always remain thus:

Does storing magazines loaded (IE, full of ammo) damage or weaken the spring?

Well, I’ve done the research and here’s the answer, in breakdown:

OK . . . there’s a lot more to this, obviously, but that’s the executive summary. Adding a bit more detail is really fascinating and tells us a lot more about how magazines as a whole function.

I took a different tack with this article: rather than delving into the lore and knowledge of the Second Amendment community, I decided to consult experts on springs—physicists, engineers, machinists, and the like. The Internet being the wonderful place that it is, I eventually found (drum-roll) Spring-I-Pedia, a wiki devoted to all things spring.  As I understand it, bearing in mind that I’m not an engineer, compressions springs like the ones found in most magazines work like this:

Springs function within a stress range, the difference between the minimum and maximum load. A well engineered spring will be placed within a device such that it doesn’t exceed or even reach its max load. Springs are further designed to allow for set, that is to say they are built longer than required to allow for compression into an assembly of some sort. Thus, a well-designed spring will take its initial set when compressed into use, and will retain that set thereafter and return to its desired length following compression and release. If the load and the compression are kept within spec, the spring should not take on a permanent set, IE the inability to return to its original condition after the load has been released. So, within the safe confines of the magazine body and loaded with the correct quantity of ammunition, simply storing a spring under load should not weaken it.

However, stuff happens, and there are circumstances in which a spring can weaken even within its normal range of use. Apparently temperature is a big factor—extremes of heat or cold can rob a spring of its elasticity and cause it to deform. I’m also told by a metallurgist friend that if conditions are damp, compressed metals are more prone to corrosion than their unstressed counterparts.

So where does that leave us? Well, as with so many things gun-related, proper storage is key: all mags, loaded or not, need to be in the proverbial cool, dry place as much as possible.  In general, I’d recommend treating them like you do ammunition as much as is practical. Your “field mags”–the ones for your truck gun or those that live in your range bag—should be inspected regularly and cycled through every 60 days or so.  Extra mag springs and followers are a must, so keep a few handy. And finally, remember that no magazine or spring will last forever and that you will need to replace them from time to time. It’s just part of what we’ve signed on for as shooters.

I hope that helps. If I missed anything, or if you’ve got your own ideas/experiences to share, please jump in to the comments section or shoot me an email. It’s always good to hear from y’all. So until then, stay safe out there.