While drinking my morning cup of coffee and doing my usual scan of defensive gun use incidents, I came across a story from Click On Detroit that was published last night.

Their story states that a 49-year-old man left his residence to check on a disturbance between a man and a woman. When the man checking on the disturbance pulled his gun, the other man, who is reported to have an Illinois Concealed Carry License, drew his own gun and fatally shot the man. It was also reported that the man who shot and killed the other man was taken into custody and the investigation was ongoing.

Now if you read the story yourself, there aren’t many details to go on. I originally planned to cover the story and discuss interjecting yourself into altercations and whether or not that is a good idea. Ultimately, doing so is up to you. We actually just covered a story where a man stopped on the interstate to stop a man that was violently attacking other vehicles. Thankfully, no one in this incident was killed but you never know what you are getting yourself into when stepping into situations like these.

But then I came across a couple of comments stating that Click On Detroit didn’t have all the facts correct. And remember, there is always more than one side to the story and often witnesses and second-hand descriptions of events can differ greatly.

That being said, I contacted a woman who is the cousin of the man who was shot and killed in this incident. According to her, neither man had concealed carry licenses. Here is her description of the events that unfolded yesterday.

Her cousin and his girlfriend had just gotten home after celebrating her birthday the night before. The girlfriends’ daughter had gotten into an argument with her ex-boyfriend, who is the man who shot her cousin.

There had been a history of both men getting into arguments in the pasts because, according to her, the ex-boyfriend had always been disrespectful. The girlfriend’s daughter kicked in the ex-boyfriends’ mother’s door so he came to return the favor. She says that he showed up with 5 other men in a van.

And that is when the other man reportedly went back to the van, retrieved a gun from the driver and then shot her cousin in the chest three times who then died from the wounds.

Below is a screenshot of my conversation with the victim’s cousin. 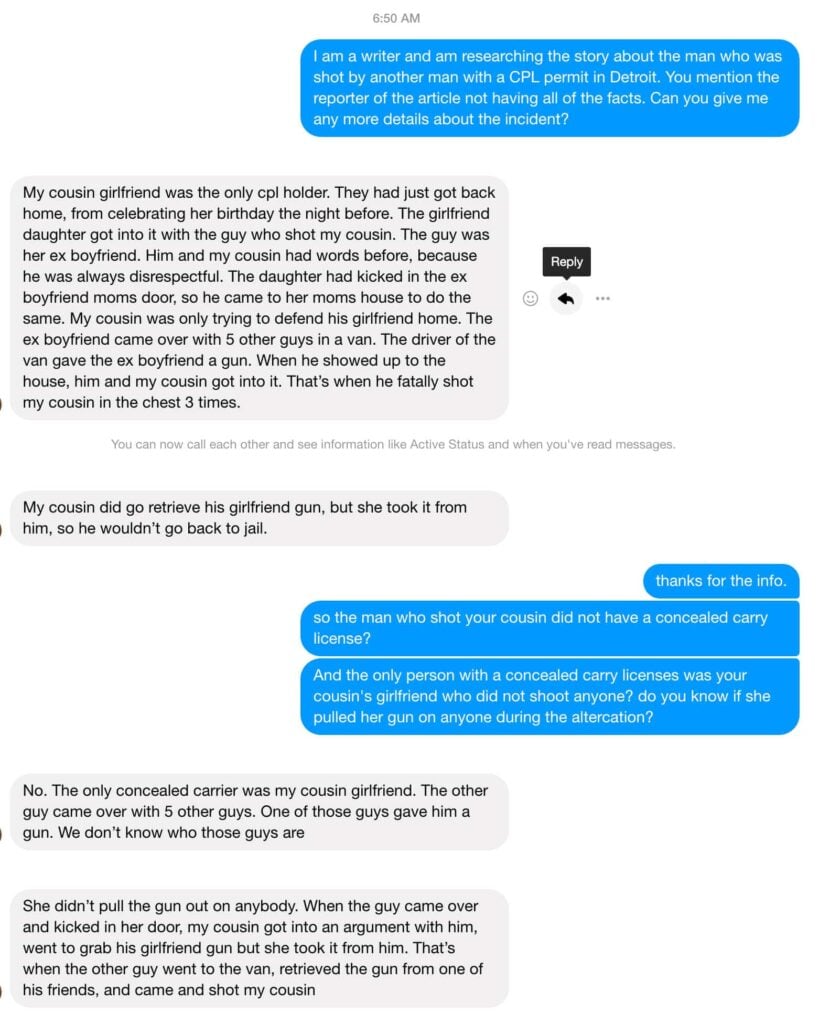