After a U.S. Marine veteran saved his friend’s life by disarming a man attacking him, he was arrested for possessing a handgun within 100 feet of a public building and carrying and transporting a concealed weapon.

Lloyd Muldrow, 57, former U.S. Marine, traveled to Baltimore, MD, to spend time with his friend. Upon his arrival at a bar where his friend was, he saw his friend in a struggle with another man. His friend was bleeding from the head after being pistol-whipped by the other man. The attacker was still holding a gun, so Muldrow disarmed the suspect, and then both men held him on the ground.

When police arrived on the scene, they took control of the suspect. Muldrow told the police he had a holstered firearm they took possession of. They thanked him and then arrested him for possessing a handgun within 100 feet of a public building and carrying and transporting a concealed weapon.

Muldrow had a Virginia concealed carry permit, but Maryland doesn’t accept any other state’s permits or licenses. So Muldrow was not legally able to carry a concealed gun in Maryland.

And that is the problem with the mess of concealed carry reciprocity we have in the United States. You can’t carry in a neighboring state if they don’t have reciprocity with the state your concealed carry permit is issued in. You can, but you risk being prosecuted for having that gun, whether or not you used it in self-defense.

Do I think this is fair? No. But as we often mention, it is our responsibility to know the laws of the state we are carrying firearms in. And if you plan on breaking the law and carrying anyway, then you need to be prepared to deal with the consequences of that decision.

Muldrow stated that he wouldn’t accept a plea deal or settle for probation and doesn’t think it is fair. He is scheduled to appear for a hearing in Baltimore Circuit Court on October 31.

A GiveSendGo campaign is set up to help with Muldrow’s legal fees. 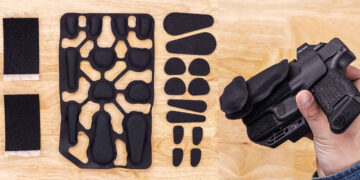