by Brian Armstrong
in Articles, News
1 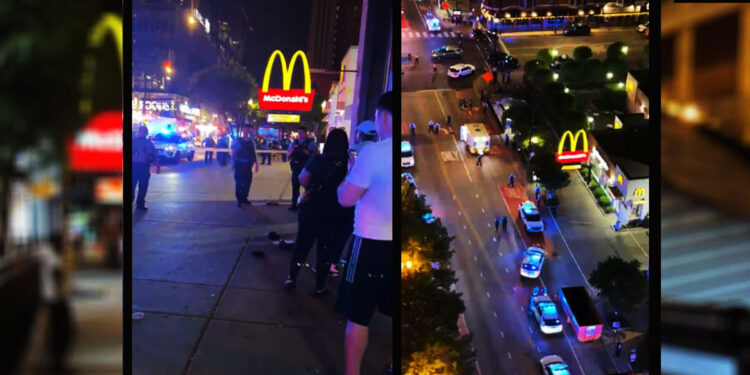 A dispatcher asked, “What is it that you have on scene for the [evidence technician] to process?”

“Alright. Let’s go between 30 and 50,” suggested the dispatcher.

Two people are dead and eight injured in Chicago’s Gold Coast. It is one of the city’s most affluent neighborhoods and just blocks from the Magnificent Mile, a main tourist destination. It’s definitely not the area you would expect something like this to happen in.

My day started with a text from a student who had been through one of my concealed carry classes. He lives just blocks from the location of the shootings. He doesn’t always carry his gun, and I frequently tell him he needs to make it part of his daily routine. I asked him what he thought about last night.

“I have a real fear of getting caught up randomly in crossfire. It’s certainly caused me to start carrying all the time rather than some of the time. It’s top of mind every time I leave the house.”

Witnesses said a large group of young people was fighting outside McDonald’s last night when gunshots rang out around 10 pm. Police were there within minutes and began chasing a man with a gun.

Witnesses also report that while officers and paramedics were treating the wounded on the sidewalk, a fight broke out between a group of other people, further adding to the chaos. Shots were again heard around 10:45, and more people were hit.

GRAPHIC: Pools of blood and emergency equipment still on the street from the mass shooting in downtown Chicago

Worst part is people barely seem to notice walking past to work 😔 pic.twitter.com/EkKi3SBlSF

Another student who lives a few blocks North sends me a text with another link. She said, “As a neighborhood owner I feel unsafe in a city I once adored for over 20 years. I don’t recall hearing these issues when Daley was around. Lori Lightfoot has to go.”

Mayor Lori Lightfoot released a statement on the shooting, saying, “Area residents, commuters, and others simply must have the peace of mind that this highly trafficked area is safe, and it is time for more specific, concrete steps to be taken to address this area once and for all.”

Residents have been hearing this for months, and when people fear for their lives, they will find ways to protect themselves. The weather just started warming up, and the calls I have received for concealed carry classes have gone through the roof in the past two weeks. Usually, calls for firearm training go down this time of year, but it isn’t looking like it will not be a slow summer.

A chaotic shootout left at least 2 people dead and 8 others injured on the Near North Side last night.

The primary shooting scene is near the Chicago-State Red Line station, just a couple of blocks from the city's landmark Water Tower.https://t.co/VqxCb3EU2w

I live in Chicago and carry everywhere I can and every chance I get. The problem is that the gun laws restrict lawful carry in all of the places where you need it most… the City’s buses and trains, government buildings, parks, etc. However, the thugs that are recklessly shooting in these places know they will get away with it and don’t care about the laws, so these laws only prevent legally licensed concealed carriers from protecting themselves in the places they need it most. Everyone calls for more gun laws. Why? They don’t enforce the ones that already exist, and when they do, the Cook County States Attorney doesn’t prosecute or lets them right back on the streets.

5
Reply
No Result
View All Result