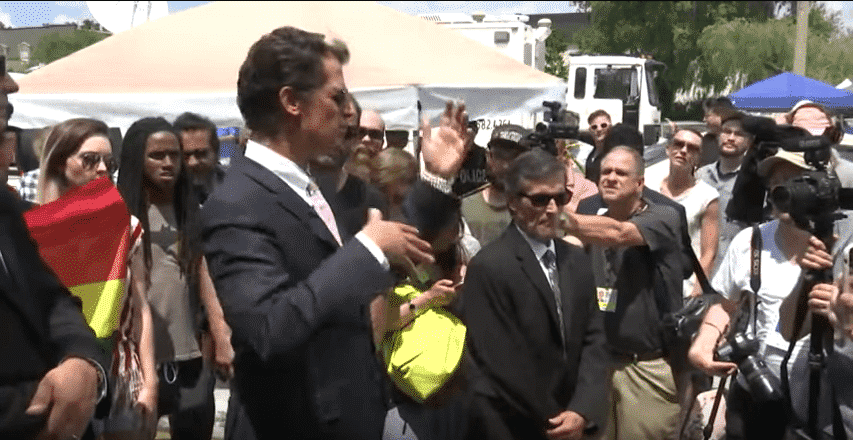 The recent massacre of unarmed patrons of a “gay” nightclub in Orlando has raised the call for everyone to reconsider going to public places unarmed. We are forced to remove our firearms and leave them in our vehicles or at home when we plan on visiting “gun-free zones,” if we wish to remain law-abiding citizens. Federal buildings, schools, movie theaters, sporting venues and of course any place which serves alcoholic beverages. A continued procession of massacres in such places shines the light on what we as a society need to change in our current laws and prohibitions. The knee-jerk response always seems to be to take away the right of the people to have guns…therefore, only criminals have guns, and innocent lives continue to be taken. Right now, the LGBT community is waking up to the fact that as a targeted minority, they feel even more vulnerable, but actually, everyone is just as vulnerable whenever they choose, or must, enter a so-called “gun-free zone.” Perhaps it is time a serious and thorough poll be taken throughout America to determine whether the people wish to abolish these “gun-free zones.” Are people more safe – or would they feel more safe – if they were in courthouses, federal buildings, hospitals, churches, schools, movie theaters, sporting events, restaurants, bars, nightclubs, and other “safe spaces” – if legal CCW permit holders were allowed to remain armed in such locations? What good is a permit, if not permitted to carry a weapon for defense in every feasible location?

The problem here is that carrying a gun in an establishment that sells alcohol for consumption is illegal. There is good reason for that law. Intoxication and firearms are not a good mix. If we want to go out for a party or whatever, we need to go somewhere where alcohol is not served and carry our concealed weapon.

I’m with you on that, it is just that the LGBT community is now suddenly sounding off as if they want to allow CCW within “gay” bars and nightclubs. At least arm themselves for outside those places which serve alcohol.

I would not have a problem with that, except what about the other guy who may be drinking and decides to go bonkers?

you can consume alcohol in Virginia if you open carry

Sense you should always have a DD with you when you go drinking with friends he/she could be the sheepdog for the flock on their night out. No mixing, good compromise you think?

Lone Wolf”, “Home Grown”, and “Domestic Terrorism” are liberal buzz words for Not Muslim. I find it beyond vile for liberals to work on gun control rather than address the radical Islamic threat. Obama has average nearly one a year since elected:

7. December 2015: Syed Farook and Tashfeen Malik, a married Pakistani couple, stormed a San Bernardino County government building with combat gear and rifles and opened fire on about 80 employees enjoying an office Christmas party. They killed 14 after pledging loyalty to ISIS. A third Muslim was charged with helping buy weapons.

6. July 2015: Mohammad Abdulazeez opened fire on a military recruiting center and US Navy Reserve in Chattanooga, Tenn., where he shot to death four Marines and a sailor. Obama refused to call it terrorism.

5. May 2015: ISIS-directed Muslims Nadir Soofi and Elton Simpson opened fire on the Curtis Culwell Center in Garland, Texas, shooting a security guard before police took them down.

4. April 2013: Dzhokhar and Tamerlan Tsarnaev, Muslim brothers from Chechnya, exploded a pair of pressure-cooker bombs at the Boston Marathon, killing three and wounding more than 260. At least 17 people lost limbs from the shrapnel.

3. September 2012: Terrorists with al Qaeda in the Maghreb attacked the US Consulate in Benghazi, Libya, killing the US ambassador, a US Foreign Service officer and two CIA contractors. Obama and then-Secretary of State Clinton misled the American people, blaming the attack on an anti-Muslim video.

2. November 2009: Army Maj. Nidal Hasan opened fire on fellow soldiers at Fort Hood, Texas, killing 13. Obama ruled it “workplace violence,” even though Hasan was in contact with an al Qaeda leader before the strikes and praised Allah as he mowed down troops.

1. June 2009: Al Qaeda-trained Abdulhakim Muhammad opened fire on an Army recruiting office in Little Rock, Ark., killing Pvt. William Long and wounding Pvt. Quinton Ezeagwula.
Folks these are just the ones we know about, how many have been prevented through no help of Obama and the Democrats?