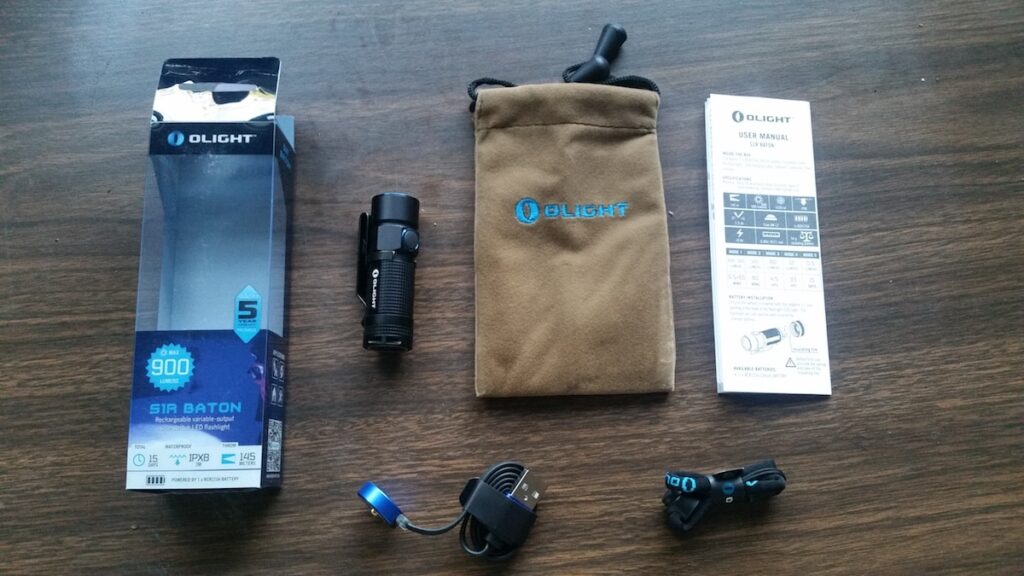 As a gun writer, you make some interesting friends. Over the last few months I’ve been chatting back and forth with the good folks at Best Light, an online vendor of some of the best flashlight, lanterns, batteries, and related accessories available. I’m a flashlight nerd myself, so this was a fun chance to talk a niche I enjoy with people who are similarly enthusiastic.

And then they decided to send me a light, with the stipulation that I do a totally honest review. Fair enough; I think everyone involved is owed honest feedback. The light they chose was Olight’s S1R Baton. Having used this little thing pretty heavily for a week or so, I do indeed have some opinions.

Upon opening the box and sorting through the various accessories—storage bag, USB charger, and the like—two things struck me about the light itself. First, its size; I’m old enough to remember clunky 2 D-cell lights that put out a weak yellow beam so modern LED flashlights will always amaze me. Secondly, just handling the S1R gives the impression of rock solid construction and attention to detail. There’s not a bit of machining or a single point of assembly amiss, and that’s a good thing.

I’ll spare you a breakdown of how the light works, aside from noting that it’s all done via a single switch on the side, which—manipulated properly—allows you to turn the light off and on, cycle through the various brightness modes, set the timer for automatic shutoff, and the rest of the light’s many nifty features. And good Lord, is this thing bright!I keep mine on the second lowest setting, which has proven to be generally bright enough for any use. The highest setting is referred to as Turbo in the instruction manual, and they’re not kidding. None of the lamps in my house are that bright in focused beam. DO NOT shine this one directly into your eyes or someone else’s; they’ll be seeing burn marks for a while after. (This is the voice of experience. I accidentally did so and temporarily blinded a couple of my friends. Josh, Joan: I’m sorry about that and I owe you both a beer!)

In addition to its capabilities as a light, the S1R has some other noteworthy features. While there is a lock mechanism which can be programmed via the switch, the pocket clip is designed such that it can be rotate around the body of the light to cover the switch and prevent accidental ignition. The magnetic base connects the USB charger almost automatically, but can also be used to hold the light while working—as can the aforementioned clip by attaching to the brim of a cap or hat for an improvised headlamp.

So what do I think overall? This is a rock solid little light that punches way above its weight in terms of performance. It is not whiz-bang tactical, so if you’re looking for a flashlight for self-defense or your next deployment you may want to check out some other products. The inability to manually focus the beam may bother some people, but I don’t worry about that much in a pocket light. And one final caveat: the light is designed for 16340 rechargeable batteries and will run on CR123’s in a pinch, but they won’t let you make use of your stash of AA cells.

(Caveat Lector: I have found that the finish on my light has a few chips in it after regular use. Nothing that should affect functional durability, but I thought I’d mention it.)

The bottom line is that Olight set out to make an affordable, versatile, and powerful EDC light, intended to ride around in your pocket, briefcase, purse, or toolbox unobtrusively and then deliver when you need it to. Toward that end the S1R succeeds beyond what its price tag would suggest. If you’re in the market for a flashlight to fill that role, I suggest checking this one out.

(I’ve just been told by my friends at Best Light that they’ll give y’all 10% off any purchase with the promo code USACARRYJENKS. I’ve never been a promo code before, so this is quite the moment for me!)

Concealed Carry Life: Do You Need an Attorney?

Concealed Carry Life: Do You Need an Attorney?