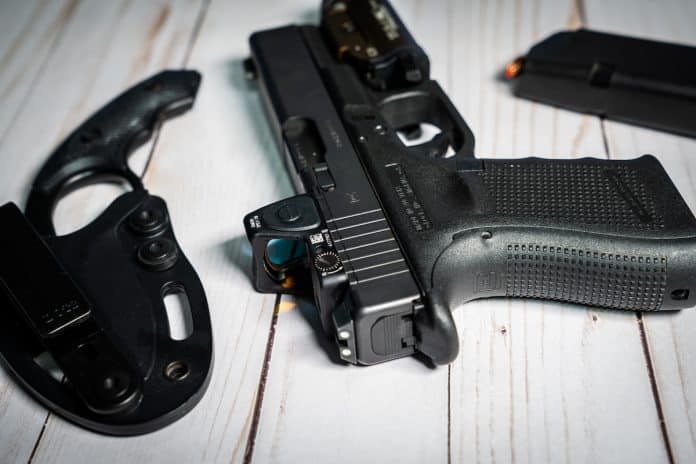 Welcome to the future. Long gone are the days of endless eye strain attempting to focus on the thin blade of steel at the muzzle while the static target becomes overwhelmingly out of focus. Interestingly enough, the red dot sight is nothing new. It has been around for nearly 40 years. However, recent advances in technology have allowed for much more compact and lightweight options, some of which you can mount to a pistol slide. For example, the wildly popular Trijicon RMR weighs in a whopping 1.2 ounces, including the battery! As technology advances further, there will continue to be a trend towards factory optic compatible pistols for Law Enforcement, Military, and Civilian use. For now, have a peek at the good, the bad, and the misunderstandings of Pistol RDS.

Unlike traditional iron sights, which require three planes to account for, red dot sights allow for a single plane of focus, the target. The illuminated dot will be superimposed over the target when you are focused on the target. This will enable you to remain target focused throughout the shot cycle. In a defensive role, being target focused is an enormous benefit, because the target is typically a threat. Staying threat focused allows your brain to process much more information while ensuring the pistol is on target. Additionally, a single focal point speeds up transitions between targets by eliminating the need to switch between the front sight and the target continually. If you have poor eyesight when focusing on the front sight, a pistol RDS is the way to go.

The term red dot has become somewhat of a catch-all, there are multiple options available. Some RDS come equipped with a delta reticle, some with a circular halo type reticle, and others with a simple single dot. Many, but not all, red dot sights allow for the intensity of the illumination to be adjusted. This gives the user the ability to customize the reticle to their needs. Although, there are models available that automatically adjust brightness and are self-illuminated with fiber optics and tritium.

It’s not uncommon to see shooters pick up a new firearm and instantly change the factory sights for their favorite flavor of brightly colored sights, fiber optics, or tritium night sights, because it is much easier to see sights with high contrast. It goes all the way back to the days of fixed sight revolvers. Shooters were taking their favorite enamel paint and coating the front sight to allow for a quicker sight picture. The concept of enhancing sight picture is nothing new.

The Good – Manipulations using the RDS

For many out there, properly charging a handgun can prove difficult, especially for those with arthritis and weak hand strength. This is where a slide mounted red dot sight can be beneficial. Coincidentally, using the RDS as a charging handle of sorts also aids in malfunction clearances. There are times when rounds will stove pipe and require a quick rack of the slide to clear it. Improper hand placement or an inadequate grip on the slide when attempting to clear a malfunction can cause further malfunctions. A quick slap of the RDS and the gun is back in the fight.

Currently, there are nearly a dozen red dot sights offered that manufacturers market for pistol use. The most common pistol red dot sights are the Trijicon RMR and Leupold Delta Point Pro, but it’s not uncommon to see the people mounting a Shield RMS, Holosun HS507C, Burris Fastfire III, Vortex Venom, or Vortex Razor on their pistol slides today. As with all optics, you get what you pay for, and even the least expensive pistol RDS is in the $200-300 category. Factor in purchasing a new optic ready pistol, sending your slide off to be milled, or a dovetail mount and that price begins to skyrocket.

When it comes to slide mounted red dot sights, many often wonder about the durability of electronics experiencing massive forces from a reciprocating slide. Thankfully, most RDS are capable of tolerating such forces, but their housings are a different story. Thus far, only a select few pistol RDS have passed muster for Law Enforcement and serious defensive use. Many of the lower end competitors have catastrophic failures after a simple drop test. On the other hand, there are documented cases of the Trijicon RMR holding its own after 20,000 rounds and extreme abuse. It’s good to know the limitations of the optic and choose what fits your application best.

Battery life is the number one argument of the anti-RDS crowd. “What will you do when the battery dies,” they ask. The answer is simple, iron sights. Unless you are competing in a division that allows pistol red dot sights, you will most likely find that most defensive pistols equipped with a RDS also have iron sights. The reason for this is that in the event of a failure, causing the dot to disappear, the shooter can still obtain a reasonable sight picture.

The second most common argument is fogging. If you transfer the pistol from a cold environment to a hot environment, condensation may form on the lens. This can easily be combated in two ways: Anti-fog coatings and Occluded Eye Aiming. Occluded Aiming is a technique used when one eye is obstructed from seeing the target. The other eye can see the target, and thanks to binocular vision, the brain can merge information from both eyes. This allows the shooter to make relatively accurate hits without being able to see through the optic. If it seems foreign, that’s how the Single Point sights were developed in the ’60s.

At the end of the day, one must ask themselves if the benefits of a pistol RDS outweigh the cost associated. It will not make you a better shooter, but it will allow you to process information much faster. So if being the fastest is the name of the game, a Pistol RDS might be something worth looking into.