Posters, Slogans, and Punisher Skulls: A Warning for the Wise 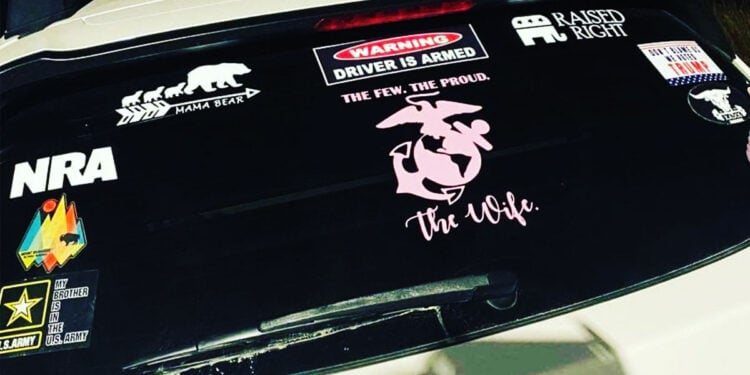 After years of training with many of the best instructors on a wide variety of self-defense and personal protection topics, I have concluded that cavalier overconfidence belongs to the ignorant. The person who “grew up around guns” and was “shootin’ cans with grandpa at five years old” thinks he knows something about self-defense with a firearm but likely knows nothing. He is, however, confident that he knows everything necessary in terms of guns and the use of force. Such an individual is a greater liability to themselves and those they would protect than the person who grew up a stranger to firearms, yet sought it out in adulthood, and attended professional training from the beginning of their journey into the craft.

It is the penchant of many such firearms enthusiasts who lack any serious training to embrace all sorts of legally detrimental practices, including slogans on posters, clothing, and even on their guns and weaponry. This bizarre inclination leads many such people to put the Punisher logo on their gun (I am not sure why that one is so popular among the mall ninjas, but it is) or to put asinine sayings on the dust covers of their AR15s. Similarly, firearms-centric posters on the front door are a classic, as well as tough guy decals on the vehicle. This trend is based entirely on the ignorance of the laws that govern the use of force, and it is the domain of the willfully untrained and ignorant. Don’t do it.

Everything Will Be Scrutinized After a Use of Force

Every single item in the vicinity of a defensive gun use will be heavily scrutinized. If you are forced to shoot a home invader, trust me, the “I don’t dial 911” poster on your front door or the “never mind the dog, beware of the owner” poster on your front gate will be used against you. After all, in the mind of the average jury member, such a poster suggests that the home is occupied by an individual who is just waiting until they get a chance to drop the hammer on some hapless bum who proves unlucky enough to enter that particular house. Prosecutors know this, and they will not forget to hammer the defendant with this bit of evidence from the scene, which speaks to the “character” of the defendant. How is having such a poster anywhere on your property even remotely worth it?

Many will argue that such signage serves as a deterrent for potential home invaders, but deterrence measures can be better served by signs that do not subject the home defender to legal jeopardy. Alarm system signs or similar options that indicate cameras monitor the property are appropriate here. However, anything that suggests the homeowner will shoot the threat should be avoided. Certainly, it is your right to defend yourself and your loved ones. Perhaps you would argue that you will not cater to certain elements of society that are opposed to the right to self-defense. While I completely understand that argument, I assure you that such signs or slogans in the house or on the property have the potential to hurt you in the legal aftermath of a use of force and are simply not worth it.

Slogans and Symbols on Firearms

Be wary of any sort of slogan, symbol, or branding that you put on a firearm. If the gun should be used in a defensive shooting, it will be a key piece of evidence that is collected and analyzed. Once again, to an individual who is knowledgeable about self-defense and personal protection, only the facts of the circumstances would determine whether the use of force was justified or not. However, always bear in mind that the average person who will be on a jury will have no such expertise. For such an individual, a prosecutor’s attack on the “look” of your firearm may sway them to consider you an unstable individual.

Any sort of comic book character branding on your gun should be absolutely avoided. The most common symbol I see on guns is the Punisher symbol. By having this on your gun, you are branding your firearm as the tool of a vigilante comic character. The prosecutor will be sure to point this out, making much out of it, and will argue that you, the defendant, obviously consider yourself the real “Punisher,” who was just waiting to enforce your own form of vigilante justice upon the first poor, misguided, downtrodden, victim of society who turned to crime out of no fault of their own. Avoid putting any such stupidity on your firearm.

Avoid using gimmicky accessories or ammunition for any sort of defensive purposes. Having Zombie Slayer bayonets on a home defense rifle is going to do nothing for your defensive application. Yet, it will do wonders to help a prosecutor sway a jury to put you in prison. Even ammunition brands or types that are gimmicks should be avoided. Zombie Slayer ammo has no place in your defensive firearm. After all, do you want the prosecutor to suggest to the jury that the deluded defendant must have thought he was slaying zombies when he shot the victims of society that broke down the door? Anything that serves no practical purpose to enhance your capability, yet would suggest that you have fantasies of violence, should be completely avoided.

There will be those who read this and argue that they will not adjust such behavior to placate the anti-gun factions of society who oppose their ability to protect themselves. Fine, your choice. However, I would argue that slogans, symbols, and gimmicks that do nothing to enhance your capability, yet can and will prove a detriment following a defensive use of force, should be called out as the liability that they are.

Lyft Driver Gets Ear Bitten Off and Car Stolen; Meanwhile Lyft Has a Strict “No Weapons” Policy

Great points. The “Come and take it!” crowd should take your words to heart.