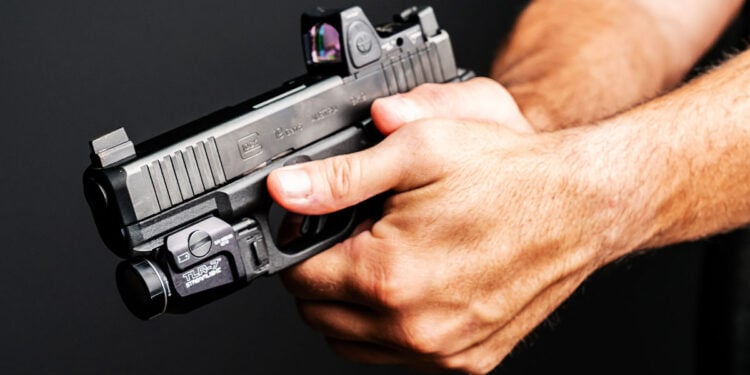 While we may not be in a profession that expects us to make life and death decisions in fractions of a second under incredible stress, we may still find ourselves in that position if we are in the habit of carrying a handgun for personal defense, or keep a firearm in the home for defense. It is prudent for us to pay attention to and learn from some of the policing-focused research that goes on mostly behind the scenes. One study that is particularly important for us as gun users to be aware of is titled “Engineering Resilience” into Split Second Shoot/No Shoot Decisions: The Effect of Muzzle-Position.

The purpose behind this study conducted by Paul Taylor at the School of Public Affairs at the University of Colorado in Denver was to explore if muzzle position would contribute to reducing the risk of mistake of fact shootings, without unduly compromising officer safety at the same time. Taylor hypothesized that there may be a muzzle position (aka ready position) that is the “sweet spot” between gun in holster and gun pointed at a potential threat where not much time is given up, but processing errors are less likely to occur.

Taylor analyzes both the likelihood of misidentifying a nonthreat and the amount of time it takes to apply force from the various ready positions. The positions that were used for the study are defined as follows.

The study results indicated a strong relationship between the officer’s muzzle position and the likelihood of misidentifying the threat and shooting the subject in error. Officers who were instructed to use the “aimed” position were twice as likely to shoot when it was not appropriate as compared to the officers who used the “low ready” position. Officers who used the “high ready” position were also nearly twice as likely to make the same error as compared to “low ready”. The disparity between the “high ready” and the “aimed” muzzle positions were not that great. Only the “low ready” position offered a significant advantage in terms of correct threat identification.

Even though the “low ready” position offered the best mitigation for threat misidentification, it must also be balanced against any response time deficiency created by the lower muzzle position. The difference of median times from ready to first shot between “aimed” and “low ready” was only 0.11 seconds. To relate 0.11 seconds to an amount of time that most people have some comprehension of, it is about 1/3 of how long it takes for a human eye to blink. While there is a time disparity, it is such a small disparity that for all practical purposes, it may as well not even exist.

Why Do We Care?

Out in public, for the average person carrying a concealed firearm, I think ready positions generally have diminished utility, depending on specific state laws. However, in a home defense circumstance, some sort of ready position is likely to be where the gun ends up by default. Even though state use of force laws may be more permissive for use of force in defense of the home, misidentifying an intruder or their intentions will always come with a significant cost. Understanding how our choice of ready position may affect our ability to correctly process information is critical to the best outcome. Use of the low ready position can be a valuable contributor to correct decision making and it comes at such a small time loss, that arguing against the low ready position is quite honestly, nonsensical.

How can you use a weapon light in the low ready position though? It seems unanimous to advise a home defense weapon should have a light on it. “Don’t shoot what you can’t see.”

If your light is bright enough, bouncing light is no problem. Good WML technique does not require the light to be pointed directly at someone to get positive ID.