Are Red Dot Sights Truly the Future for Handguns? 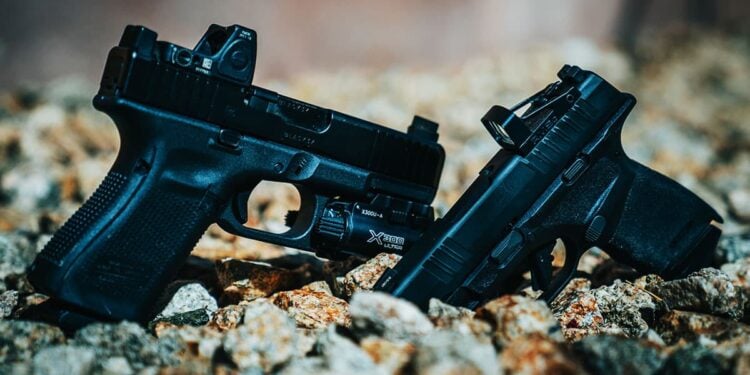 A couple of decades ago, when red dot rifle sights hit the scene, most shooters were quite skeptical. Why should we put these unreliable devices that require batteries on a fighting weapon? Fast forward to the present day and the notion of leaving a rifle equipped with only iron sights is almost inconceivable. If anything, the ubiquitous dot sight has given way to the LPVO (low-powered variable optic) as the best do-everything rifle sighting solution. But, that is rifles. What about handguns? Handguns are the weapon of intimate self-defense, unlikely to be used at greater distances, and intentionally small in a form factor so as to be carried concealed. Why, therefore, would we put a red dot optic on a pistol?

I can tell you that, even a few years ago, I did not think the technology was adequate for handguns. Reliability was not there. Now, however, I believe it absolutely is. A number of mini dot sights on the market are reliable enough for defensive handgun use and battery life is long enough to be counted on. Technology has indeed made red-dot-equipped handguns completely viable for serious defensive application.

I am still a holdout in that I have not converted to using red dots on my carry guns. With that said, I have nothing against dots on handguns and I readily acknowledge their utility and their advantages as I have certainly used them. I have simply not moved whole-sale to the dot life. Having experience with them, however, I seek to address some of the questions that routinely arise concerning micro-dots on handguns to help the reader make the decision whether to embrace the dot or not.

What are the Downsides to Dots on Pistols?

The single greatest downside to a dot sight on a pistol is that, simply, batteries can fail at a bad time. With that said, the reliability of modern red dot sights has dramatically increased and the longevity of batteries has also come a long way in these sights.

One work-around for the batter failure issue is the use of backup iron sights on the handgun in a similar way that BUIS (backup iron sights) are used on carbines that employ a red dot optic. Typically, suppressor height sights are needed as standard irons on most pistols are not tall enough to reach over the housing of the optic to be visible through the glass. Backup irons are a good solution to the downside of battery power.

Editors Note: Some new micro-dots on the market sit low enough and have cutouts to allow you to co-witness the normal height sights through the red dot window.

Another potential issue with pistol optics is that they can become occluded by water, fog, mud, etc…, and the open-diopter designs such as the widely-used Trijicon RMR are especially prone to this. But, again, this is not really different from this liability on a carbine. Still, it is a consideration. In the event that the optic is damaged or occluded by moisture, the optic may not provide visibility through it for use with the iron sights. This, again, is possible, but as with carbines, the benefits of the dot may well out-weight these potential issues for you. Training approaches can also mitigate these downsides: If the dot dies, or if it breaks, close-range targets can be engaged quite accurately just by referencing off the top of the dot housing, but knowing exactly what can and cannot be done in this regard demands training.

The most commonly reported “down-side” to red dots on pistols is that they are slower at close range as it takes time to find the dot. The reality is, this problem is entirely a training issue. Using a red dot will demand significant re-training so that you learn to align the gun in your presentation rather than being able to see and adjust according to the sights. While it requires specific training effort, this lag time can be almost entirely mitigated.

The Benefits of Red Dots on Pistols

The benefits of the dot on the pistol is, essentially, the same as those offered when on a carbine. Red dot and holographic sights require the eye to focus on only a single plane as opposed to a target, front sight, and rear sight, simultaneously. A dot allows you to visually impose the dot on the target and stay, essentially, target-focused. At intermediate and farther ranges the dot proves significantly faster than iron sights because you do not need to focus on the alignment of a front and rear sight.

A red dot also enhances the accuracy of most shooters at farther distances and does so exponentially. A decent shooter can make fifty-yard hits, and even one hundred-yard hits, quite readily with a red dot whereas these shots are doable, but significantly more challenging, with iron sights. While red dots are not as precise as magnified scopes on rifles, they typically prove more precise than do iron sights and this remains very true on a handgun. At long handgun distances, the dot is more accurate and considerably faster than irons in the hands of a well-trained shooter.

Finally, a true benefit of red dots on pistols for quite a few shooters is that it mitigates visual issues. Many shooters have trouble seeing iron sights clearly, due to typical middle-age loss of near sight, or other problems. Red dots, obviously, work like a miracle for many shooters who cannot see iron sights clearly. This was, perhaps, the driving force behind the initial movement towards dots on defensive pistols and a large portion of the shooting community has discovered this undeniable benefit.

So, with the issues and benefits of red dots on pistols explored, will we see a future with dots on most handguns as we currently see optics on almost all carbines? I believe we will see dots readily available for almost all handguns made, and an ever-increasing amount of shooters will embrace the technology. However, I am not sure that iron sights will be abandoned to only backup use as simplicity on a handgun remains a foremost virtue to many. Regardless, dots are here to stay, and the technology is now good enough that if you deem the benefits of the dot worthwhile I see no reason not to embrace the technology.

Store Manager Shot in Leg by Bystander While Chasing Shoplifters