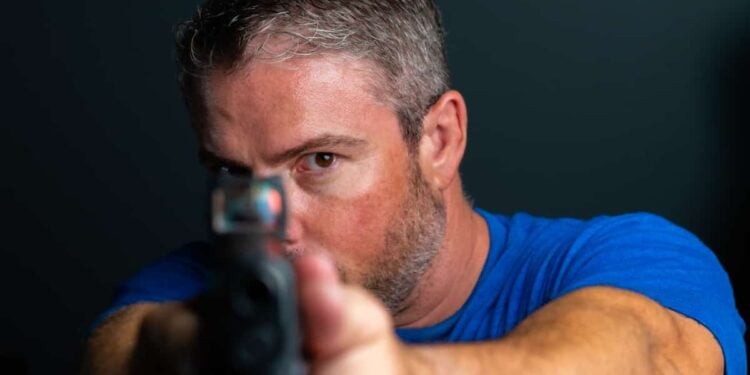 Shooting a handgun in self-defense situations obviously involves coordination between the eyes and hands of the shooter. This article considers eye dominance and its relationship to pistol accuracy in personal protection. What is not so obvious to shooters is that most of our brains have a strong preference for one eye over the other and that this can change. I have learned over my many years of teaching handgun students that some do not know which eye is their dominant eye or preferred eye. We easily and quickly determine this in class.

In addition to being a nice break-the-ice party game, here is an easy exercise with a few steps to accurately identify your eye dominance.

Below is a short video example of this exercise to determine your dominant eye or Ocular Dominance:

Most shooters’ brains are innately hard-wired for an eye preference or a dominant eye, according to scientific studies. About 65% to 70% of shooters have a right-eye preference. About 80% are also right-handed. A small percentage of about 1% have equal-eye dominance or no dominance or preference with either eye. This is called Co-Dominance. See my August 20, 2013 article about Dominant Hand and Eye Decisions in Aiming.

Mixed or alternating Ocular Dominance exists where a shooter uses one eye for certain tasks or functions and the other eye is dominant for other tasks at different times. But recognize that eye dominance is not absolute and your Ocular Dominance can change. A shooter can train their eyes to change dominance, perhaps to accommodate an eye injury, accident, or aging, but this takes considerable time and effort. Most shooting experts, but certainly not all, recommend changing hand dominance before changing eye dominance IF changing dominance is a decision. For some shooters, the preferred or dominant eye may be weaker than the other eye, e.g., due to injury or congenitally at birth. Other shooters are Center Dominant, which is like being ambidextrous with hands, but instead of two equally-strong hands, they have two equally-strong eyes.

The Goal of Handgun Training

Keep in mind that the goal of self-defense handgun training is not to change eye dominance, but rather to enhance accuracy and apply shooting basics to stop the threat for self-defense. The Flash Sight Picture Technique is a very effective approach for close-up self-defense shooting. See my October 29, 2012, related article here.

The side of the dominant eye and dominant hand do not always match. This is called Cross Dominance. Confirmations for this and things I have noticed in class (and clues for a shooter with Cross Dominance) are if target misses are slightly high and/or way off to the side… and, of course, are not attributable to other factors. Remember, Mixed Ocular Dominance (alternating Dominance) may exist, if one eye is dominant for certain things and the other eye is dominant at different times for other things. In this case, there is not strong dominance of one eye over the other eye. Some professional shooters, like Rob Leatham, say that Cross Dominance is not an issue and does not matter since shooters will naturally adapt to their situation and learn to be effective with their eye dominance.

Here are four Aiming solutions for an example situation, where the shooter is right handed and left-eye dominant:

Note: It is easier to learn and train to shoot with the non-dominant, support HAND than to change or overcome EYE dominance. Maintaining Eye dominance with minimal movement and little change is usually the optimal choice.

Learn to Shoot with Support Hand

Since I am right-handed and have carpal tunnel syndrome in my right hand, I have moved the mouse for my desktop computer to the left side for performing computer functions. This has taken a lot of practice over several years for me to strengthen and improve my dexterity, speed, and for accuracy in composing my articles and work with the computer. I have more time involved to accomplish this. I also have been training to shoot with my support or non-dominant left hand and have a long-term goal of carrying my self-defense pistol on my non-dominant left side ONLY after much practice and training. This is a very serious and potentially very dangerous move, so be very careful if you make a similar decision. Safety First Always! At least now, I consider myself ambidextrous.

Accuracy and Shooting with the Dominant Eye

Dr. Gary Heiting, Doctor of Optometry, says that knowing which eye is your dominant eye and practicing with it can help improve your shooting accuracy. He says within the cortex of the brain are bands of nerve cells called neurons or dominant eye columns. These neurons respond preferentially to input from one eye or the other and are very important for our exceptional binocular vision. Dr. Heiting says that you can make aiming adjustments with your dominant eye to improve your shooting accuracy.

So if you are Cross Dominant, for example, you can make adjustments in the position of your head to take full advantage of your dominant eye. There are more neural connections to the brain with the dominant eye, which contributes to the probability of better accuracy, according to a LeFloch and Ropars 2017 study. Although dependent upon the shooter, usually a shooter can get a better sight picture with the dominant eye. But the non-dominant eye definitely helps with depth perception and peripheral vision, according to shooting expert Chuck Hawks, Michael Yardley, and others.

Dominant eyes generally have more advantageous neural connections to the brain than non-dominant eyes, as studies show. Most shooters should use their dominant eye for sight alignment and sight picture acquisition. The non-dominant eye does have advantages for depth perception and peripheral vision, so shooting with both eyes open is recommended for most self-defense shooters at close distances.

Identifying, choosing and using eye dominance and hand dominance when shooting are very personal decisions which should not be dictated by an instructor’s or another’s preference or authoritarian training dogma. It does not really matter if you the shooter are Cross-Eye Dominant or not…. or whether you shoot with one eye open or with both eyes. But, you should especially know your eye dominance because it affects accuracy and required adjustments.

The Goal remains: Enhance accuracy and apply proven shooting fundamentals to stop the threat for self-defense. So, do what is comfortable, feels natural, and what gives you the most accurate results, no matter what individual hand or eye or both eyes or hands you use.

Continued Success and Be Safe!

© 2019 Col Benjamin Findley. All Rights Reserved. This article may not be reprinted or reproduced in whole or in part by mechanical means, photocopying, electronic reproduction, scanning, or any other means without prior written permission. For copyright information, contact Col Ben Findley at ColBFF@gmail.com.

Col. Ben is retired with 30 years service in the U.S. Air Force, with joint services weapons training, Special Ops duty at various bases, and is Air Force qualified as “Expert” in small arms. He is a Vietnam-era veteran and serves on the Board of Directors for the Florida Veterans Foundation of the Florida Department of Veterans Affairs and for the Veterans Memorial Park Foundation. Ben is an experienced NRA-Certified Pistol Instructor, NRA Range Safety Officer, and FL Concealed Carry License Instructor. His doctorate is in business and education and he has served as director of legal affairs for an organization and taught university business law. He is a graduate of two law enforcement academies for civilians. Ben wrote the book “Concealed Carry and Handgun Essentials for Personal Protection” (second printing) with 57 comprehensive Chapters about concealed carry and handgun principles, techniques, and tips for both experienced and new shooters. His reference book is endorsed by several organizations and is available on his website at FloridaHandgunsTraining.com. Contact him at ColBFF@gmail.com.