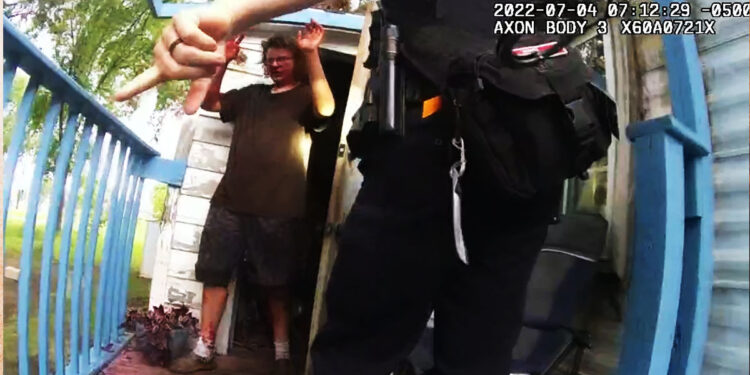 What started as two best friends drinking beer together to celebrate the 4th of July turned into a shooting that was ultimately ruled self-defense. The moral of the story is? Guns and alcohol don’t mix.

Two North Dakota friends celebrated the 4th of July by hanging out and drinking beer. After ‘hours of drinking,’ Kyle Lovaas, the man whose trailer it, started ‘acting like an idiot,’ according to the other man, Tin Nguyen. Nguyen tried to put Lovaas to bed when a fight broke out between the two in the Lovaas’s bedroom.

According to Nguyen, he started using “UFC fight moves.” Lovaas drew a gun. Nguyen tried to take it from Lovaas, who then shot his friend six times in the chest and stomach.

Local police arrived on the scene and detained Lovaas for attempted murder. He can be heard asking about his friend, concerned about his condition.

Police can be heard on body cam footage stating that Nguyen’s heart stopped due to the amount of blood he lost. Nguyen was transported to the hospital, where doctors were able to save his life. And what he told police while being interviewed in the hospital bed made prosecutors decide not to charge Lovaas with attempted murder as they would not be able to disprove his self-defense claim.

What a hot mess this story is. Hearing Lovaas’ concern for his friend after the shooting shows that it wasn’t something he wanted to do. Luckily, he won’t have to live the rest of his life with the fact that he killed his friend after a drunken argument. Obviously, guns and alcohol don’t mix. But drinking to the point where you fight with your friend is uncalled for. I’m not saying you shouldn’t drink, but you need to control yourself under the influence of alcohol. If an argument arises, it’s probably best to deescalate and talk it over when sober, if needed.

I’d also like to point out that maybe the man who was shot would have been better served to talk with a lawyer before speaking with the police, as it was his words that prompted the prosecutors to drop the attempted murder charge.

“The most important thing, in this case, was the statement we got from the victim, and his statement really corroborated much of what the suspect had said. And also, when asked about self-defense, he had said, ‘I could see how this could be a self-defense case,'” Younggren said. “… Those kinds of things we don’t often hear from people that are shot.” via INForum