Shooting from Retention: A Necessary Skill for Armed Citizens? 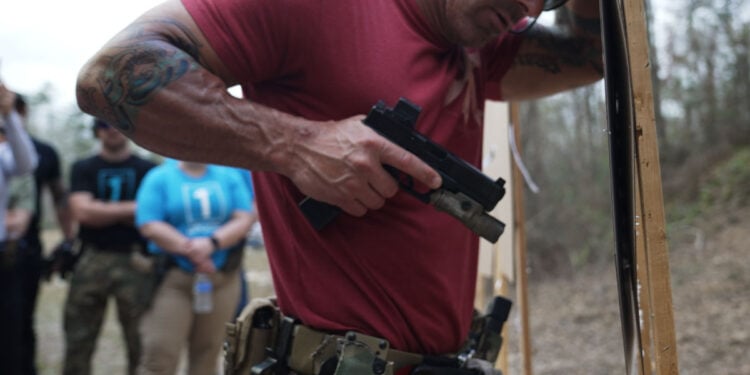 Retention shooting is a skill that only the more dedicated practitioners of defensive handgun tend to train for. The entire discipline of integrating combatives (defensive hand skills) into the world of shooting is not considered by most people with a concealed carry permit. Retention shooting is a skillset designed for using a handgun effectively at contact distance against an assaulting adversary. Thus, this discipline combines unarmed skills with the use of the gun. The physical nature of this subset of shooting skills makes it less appealing for many people to embrace from a training perspective. After all, many people consider the gun a means of dealing with a violent threat without going hands-on. Is retention shooting a needed skillset for the armed citizen, or is it just a novelty for the combatives enthusiasts?

The Realities Witnessed on the Street

To simplify this discussion I will begin with generalities: most civilian defensive gun uses do not involve contact distance shooting. With that said, many violent encounters that turn into defensive gun uses start as hands-on confrontations. And, while in the minority, violent encounters that do involve hands-on fighting over a gun do happen often enough to warrant prudent consideration. Therefore, to discount the need for the skillset of retention shooting is to fall into the trap of considering the handgun a magic talisman that will fix all problems. There is a very real possibility that the armed citizen will find themselves in a contact distance fight in which they cannot draw and fire the gun in a traditional shooting methodology. Retention shooting, and the supporting hand skills related to the discipline, is something that self-defenders should learn.

The actual technique referred to as “shooting from retention” varies depending on who you ask. In general, this involves shooting the handgun from a position that keeps the pistol close to the body so that it can be better “retained” in a contact distance struggle. Extending the gun to a traditional firing position makes it vulnerable to a disarm attempt, so when employing the gun against a threat at contact distance a different approach must be taken to retain your gun. The two retention positions that now dominate the contemporary technique are a “thumb-pectoral index” which keeps the gun tight into the body with a single hand, as well as a two-handed grip on the gun while the hands remain directly in front of the chest, essentially where your hands would normally mate up during your draw stroke. There are variations on these positions based on who is teaching them, but these are the essential elements of retention shooting.

The idea behind both positions is that they provide a means to fire at contact distance, or close distance, threats without presenting the gun out to the vulnerable extended position. While these positions appear awkward at first, they make good sense once the practitioner receives proper training on the execution of the technique. This sort of shooting tends to be high accountability in nature, as shooting from such positions is inherently more dangerous than shooting from traditional extended positions. Therefore, you should only train with noted experts in this particular field and only do so under the guidance of such.

The retention positions, however, are only one part of the system that is needed to effectively use a handgun at contact distance, and this tends to further discourage people from training in retention shooting. The reality is, while these positions can be taught and practiced on the square range, putting them into practice needs to be taught through force on force with blue guns. The physicality of such conflict can only be simulated by training aggressively, hand-to-hand. The participant will quickly realize that the shooting becomes the easy part; getting the gun out during a contact distance fight is the hard part. The participant of such training will also realize that taking the gun out may do nothing more than provide the assailant with the opportunity to take it from you, and relying on hand skills to first make room, then deploy the gun, is the most useable technique under such conditions.

Thus, we cannot address retention shooting without going into the combative, hand-to-hand fighting elements, that are needed. This, in turn, makes many shy away from training in retention shooting. The overall skillset involves being able to stop the draw of an assailant that is in close proximity to you, as well as be able to retain your own gun in the holster or already in your hand. Striking and grappling skills are also imperative here as the ability to make space between yourself and the adversary is essential. Being able to tie up the limbs of the adversary so that they cannot access their own weapons is also of great benefit. Therefore, the skillset involved in retention shooting goes far beyond only the use of the gun.

Unfortunately, quality training in retention shooting is more difficult to find compared to other shooting skillsets because the instructor needs a deep background in firearms and in hand-to-hand skills. While there are numerous reputable shooting instructors, there are not that many shooting/combatives instructors that are actually accomplished in teaching this skillset. It is imperative to do your research in this regard and choose wisely. I can highly recommend several instructors in this selective field; you can’t go wrong by training in these techniques with Craig Douglas, Greg Ellifritz, Cecil Burch, or Kelly McCann. There are others as well, but be sure to vet their background and who they have trained under themselves.

In closing, it is safe to say that contact distance violence is often involved in civilian self-defense, so if you have not trained in retention shooting, and the hand skills that support it, you should seek out such training to fill that void in your defensive skillset.