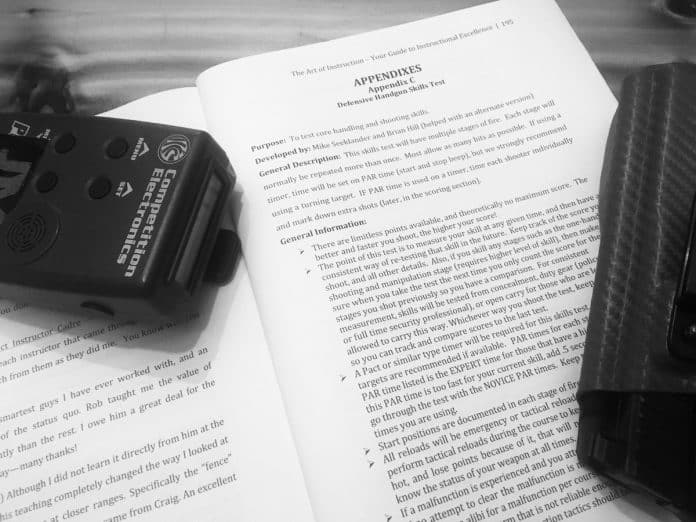 There are all sorts of shooting test and drills out there in the world. Different law enforcement qualification courses, qualification courses used by carious independent training organizations, drills that have been around for years, or even decades, with known standards, and new drills being created probably more frequently than any of us realize.

When we start talking about actual skills test, we typically see things that begin to mirror law enforcement style qualifications. The strings of fire will be set up as complete X task in Y time. For establishing a minimum standard of performance, this is perhaps an acceptable scoring methodology, but when it comes to tracking my performance, I am not looking for a minimum standard. I am looking for what is the absolute best I can do, and then I want to be able to track that over time. When a performance metric has a cap on it (i.e., A maximum attainable score), it can only measure performance so far, and then it stops. Its growth is limited, and eventually, the shooter will outgrow the tool used to measure their skill level.

Measuring Your Growth as a Shooter

The Shooting-Performance Defensive Handgun Skills test developed by Mike Seeklander is a measurement tool that can grow as far as the shooter can go. The premise of the course of fire is that each string has a PAR time (a time limit), and the shooter’s job is to get as many hits as they can within that PAR time. Usually while performing some other task as well, like completing a reload or moving to cover. The score ends up being based on the number of hits achieved, with point values assigned for hits in the -0, and -1 of an IDPA target. Hits in the -3 are not worth any points, and complete misses of the target deduct points.

A Skills Test for Everyone

This skills test can meet you wherever you are at on the skill curve using this scoring system. If you are a novice shooter with only a foundational level of skill, it will work for you. Are you a National champion shooter like Mike Seeklander? It will work for you as well. That is the greatest thing about this test is that it is a test. It is not a set of drills to get better at shooting. The Shooting-Performance Defensive Handgun Skills Test is what you use to make sure that all of your other practice is giving you the results that you are looking for.

Push Yourself VS. Meeting the Minimum Standard

Since the test uses PAR times, and the strings of fire are “do as much as you can do within the PAR time,” it tends to place a fair bit of pressure on the shooter. Unlike the usual qualification style course, where the goal is to be better than the minimum standard, this pushes people to do as well as they can do on the task at hand. It also avoids all of the problems associated with having set strings of fire.

This is also one of the most comprehensive skills tests I have ever shot. It includes all the usual stuff, like drawing from concealment, reloads, and basic movement. But it also includes one-handed manipulation of the handgun, and movement to and shooting from cover. Disclaimer though, if you are not familiar with and have more than just a basic level of skill at performing one-handed draws and reloads, it is probably best to skip those strings of fire and make a note of it when you record the score.

Hits in the -0 of an IDPA target (8” circle) are worth 2 points each. Target hits in the -1 are worth 1 point each. Hits outside of either of those zones are worth 0 points and misses subtract 5 points, so don’t miss.

When shooting the test, it is all about balance, and understanding what your skill level can get you. Hits in the -1 zone of the target are not horribly penalized. So at times, it might be beneficial to push the gas pedal as hard. You can risk getting a few -1 hits if it lets you get enough lead on target to pay off.

There are some traps to watch out for. The biggest one is probably stage 7. It is easy to forget to switch gears when going from the body to the head. But misses on the head cost just as much as any other miss. Be sure to hit that gear shift and get the hits on the head zone. On the strings of fire without PAR times, be sure to get the best hits possible. Take advantage of that time! With the two strings moving to cover, being able to move into the shooting position and get the gun on target all at once will make maximum use of the time available.

This is an incredibly informative skills test. It gives us a great deal of information about where we need the most work. Also, being an open-ended scoring system, it can grow with us as far as we can go. If you get a chance to shoot it, be sure to let us know how you do and post your score in the comments.