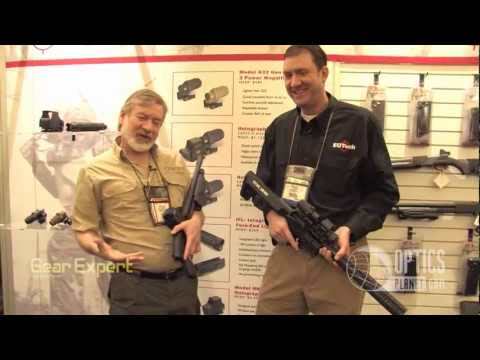 Day 3 of SHOT Show was fantastic.  A TON of great new products were shown, and they cover a wide variety of uses, from keeping your gear safe to taking accurate shots both near and far!  We’re going to have exclusive video interviews that showcase the products below, but I want to give you some details now so you can get excited.

Crimson Trace hosted a reunion for winners of fan favorite Top Shot, which, for those of you who don’t know, is a hit show on the History Channel for shooting enthusiasts.  To lend some gravitas to their already sweet lineup of new products Crimson Trace had first season winner Iain Harrison showing off some of their new products.  He’s a pretty cool guy, and our Director of Product Intelligence Steve Ledin was able to get a photo with him.  Steve was real happy to be able to meet such an accomplished marksman.

My favorite booth this year had to be Pelican‘s.  Their cases are simply amazing.  Not only are they incredibly tough (soldiers throw them out of helicopters), but they’re also cleverly designed, with a bunch of really cool features and innovations to make your life easier.

First up we saw the Pelican Hardback Case.  There are a few different models, with some designed for laptops, while others are better for tablets, and since I love my tablet, I really liked these cases.  So what makes them great?  Well, toughness is obviously key.  The main point of having a case is protecting your stuff, whether you have a tablet, computer, camera or rifle that needs to be safeguarded, so the trusted quality of Pelican is welcome.  Your tablet will be protected from shocks and impact without scratching the screen, and the case is waterproof so you don’t need to worry about rain or dropping it in a puddle or lake.  The guys from Pelican even showed off how they can submerge the case and your electronics are still protected.  Pretty cool stuff.

But the Hardback Case for tablets is more than just a quality tool for protecting your tablet.  It also features a foam insert to hold your tablet upright, and there’s space for a bluetooth keyboard.  When you open the case you can just start typing away and using your tablet like it’s a laptop.  And the case is lightweight and comes with a carrying strap, so you don’t have to worry about lugging it around.

Hybrid Traveler.  It’s a really cool backpack/luggage series of cases that combine the flexibility of many tactical bags with a quality hard case to protect electronics.  I haven’t seen it in action, but the pictures look really cool.  The basic idea is that the Hybrid Traveler is two cases in one.  There’s a hard case that’s waterproof and perfect for your laptop or tablet. Another outer case is soft, but still has plenty of foam padding and ventilation.  It’s a great place to put your SLR camera or any other gear you want to take along.  There are plenty of extra compartments for you to haul anything you may need, and everything will be afforded a great deal of protection.  Our video guy uses Pelican hard cases to keep his cameras safe and secure, but he thought the Hybrid Traveler would be better for next year’s SHOT Show because of how lightweight it is and how easy it will be to transport.

All in all, Pelican had a really great showing this year.

Nikon because they know balance quality and price as well as anyone.  Their latest riflescope is the P223 3X32 BDC Compact Scope, which was a big deal around SHOT Show.  Everyone was talking about it, and it’s not hard to figure out why.  This scope is simple but effective.  Rather than attaching a bunch of bells and whistles that only a small portion of shooters use, Nikon has taken quality glass and calibrated it perfectly.  The Nikon P223 was made for AR-style rifles, and it is the perfect scope for shooters at every level.  If you’re just starting out you won’t have to deal with a complicated reticle or excessive adjustments, and if you’ve been shooting your whole life it’ll give you the reliable performance you need for your regular hunting trips.

Adding to the simplicity of the scope, the P223 uses a 2 piece mounting system, and you shouldn’t have any trouble sighting in.  That’s a welcome relief for any shooter.  You want to get out there and make some shots, not endlessly fiddle with mounts!

Another really cool optic at SHOT Show from Nikon is the Monarch 5 Binoculars.  They only released theMonarch 3 a little while ago, and we are big fans of those here at GearExpert by OpticsPlanet.  The Monarch 5s are the next step up, with lightweight construction coupled with durability.  The glass is high quality but also eco-friendly, as it was manufactured using no lead or arsenic, and the prism coatings are incredibly advanced so that you’ll get a bright image.  I think a lot of people will be enjoying the Monarch 5s this year.  They’re already available at OpticsPlanet, so there’s no need to wait for them to be released!

had a couple cool new products this year, but the one every wants to know more about is the TLR-4.  We’ve already had people contact us to make orders!  I don’t have the exact release date yet, but I did get to learn a bit more about this fantastic weapon-mountable flashlight!  First up, it’s very compact. The TLR-3 is a great little light, and the TLR-4 looked even smaller at SHOT Show.  It uses LED lights, which, when combined with the quality construction, makes this a very tough weapon light.  It generates about 110 lumens of light, which should be more than bright enough for most situations.

But the Streamlight TLR-4 isn’t just a flashlight.  It also has a laser sight, so you can enjoy fast target acquisition while you light up your target!  The On/Off switch is ambidextrous and easy to use for momentary illumination.  We’ll be seeing a lot more of the TLR-4 in an upcoming video, but it really impressed.

EOTech had some fun this year, but they also made some great improvements to existing product lines for greater functionality.  First up, we have to talk zombies.  I briefly mentioned that we saw the EOTech XPS2-Z Zombie Stopper Holographic Weapon Sight on Tuesday, but we got to play with it a bit today.  EOTech actually put together a whole zombie shotgun, with their new fore-end light and the XPS2-Z.  You can see Steve holding it in the picture.  It looks pretty cool.  The XPS-Z replaces the red dot with a red biohazard symbol, and it has the biohazard logo on the sides and top.  But just because it’s geared specifically for zombies doesn’t mean it lacks quality.  It’s very similar to the EOTech EXPS-2, with the same great battery life, fast target acquisition and super tough construction.  Very tough.  Very neat.

The IFL-Integrated Fore-End Light is a great fit whether you’re hunting the undead or in a tactical situation and need a reliable light on your 12 gauge shotgun. There are ambidextrous pressure pads, so lefties aren’t left out, and the LED light is both bright and durable.  This EOTech Fore-End Light has three modes: constant-on, momentary and strobe.  I’m pretty sure zombies rely more on their sense of smell than their sight, so you may not blind them with the strobe, but a regular human’s eyes will need a minute to adjust.

If, sorry, WHEN I’m on the run from zombies I’ll be glad to have these two great new weapon accessories.  I’ll turn the tide of the zombie plague single-handed. I’ll be a hero.

One other great new product EOTech displayed at SHOT Show is the G33 Magnifier.  We have the EOTech G23 Magnifier available now, and it’s a fantastic accessory for a red dot sight, but EOTech thought they could make a few little improvements.  There are three main differences between the G33 and the G23.  The G33 is smaller, which makes it easier to find room on your rail (always welcome), it has a diopter adjuster, which allows you to make subtle changes to the image for a better view, and instead of being flip-to-side mounted, it’s shift-to-side.  We actually thought it was a push-to-side, but the EOTech representative was very clear that it’s shift-to-side.  Either way you say it, this magnifier is a little quicker and easier to get in line with your red dot sight now.

Overall, we had a great time at SHOT Show yesterday.  What’s really amazing is that all the news we’ve shown so far just scratches the surface of the coverage we’ll have for you in the coming weeks.  We have exclusive video interviews coming, and you’ll get to see these great products in action, with more details straight from the brand representatives and our product specialists!  Keep coming back to GearExpert by OpticsPlanet.  We have so much more for you from SHOT Show 2012!

wow i cant wait to see this year’s product!

Who would put a Eotech Holo sight on a pistol grip shotgun? That’s just dumb