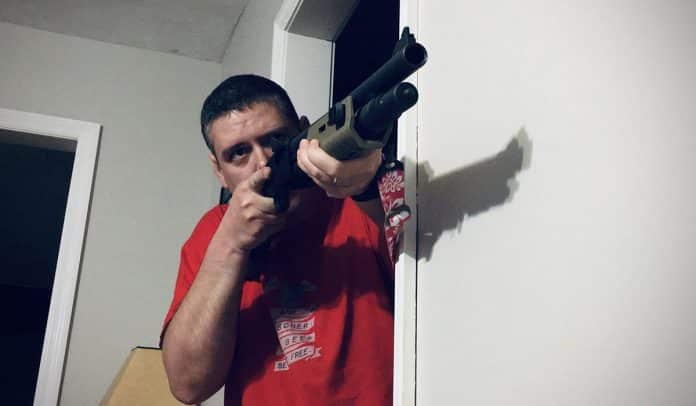 A few decades ago, the shotgun was much more of a mainstream firearm than it is now. Shotguns these days see most use as hunting implements or for sport shooting (i.e. clay sports). They are no longer the cool guy gun, and many argue, not the best gun for the job anymore. Maybe because most of today’s instructors pull from military experience tied to the ongoing war on terror, and the AR-15 is the long gun they understand. Or maybe it is because no one uses shotguns in the movies. Well, except John Wick. Really though, the list of reasons for this shift is anyone’s guess. I don’t think though that lack of effectiveness is one of the reasons on that list of possible reasons.

The shotgun, well loaded, is the most conclusive man-portable practical use weapon people can easily get their hands on. It allows us to shoot the bad guy 8 or 9 times with a single press of the trigger assuming a fairly standard 00 buck load. I can run an AR-15 pretty fast, but still not that fast. Clint Smith puts it really well, so I will just let him tell you.

The other thing that makes shotguns still relevant is the price. A solid shotgun will cost around $500 new. A good used one can go as low as $250 if the buyer knows what to look for. The cheap budget blaster shotguns drop under $200, and while maybe not my first choice, or the second choice really, they are better than most over sub-$200 firearms. For less than $1,000 you can get into the top end of defensive shotguns. Good luck finding any other decent defensive use long gun for as a budget-friendly a price as the equivalent quality shotgun.

What good is a gun without food to feed it? While some shotgun loads can get hard to find, generally speaking, shotgun ammunition tends to be the most immune from the ebb and flow of the market, including panic buying. With the coronavirus panic over the past few months, handgun and rifle ammunition became a bit scarce. Where it wasn’t scarce, prices nearly doubled in the matter of a few weeks. Even now, with many states moving back down the road to something like normal, prices are still up. Shotgun ammo? I bought some at Walmart last week for less cost per round than I pay for 9mm right now. Even in the midst of the panic I was able to find suitable serious use 12ga ammunition for no more than it cost at the end of last year.

Side eye? What side eye?

Lastly, shotguns are the “politically correct” gun. For whatever reason, the general non-gun owning public doesn’t associate the same negative connotations that they have for the AR-15 et al with shotguns. In general, anyway. Everyone has grandpa’s old shotgun, so no one is surprised when you tell them that you have a shotgun. Even Joe Biden thinks you should have a shotgun. For whatever reason, shotguns just don’t seem to get the side eye as much as other types of firearms.

So, while shotguns may not be the gun all the cool kids have anymore, they are still capable defensive use firearms. Especially at the short ranges typically associated with home defense. With careful selection of the shotgun, careful selection of what ammunition gets stuffed into the shotgun, and some good training, they can be the Thor’s hammer of home defense firearms. What do you guys like to use for home defense, and why? Hit us in the comments.