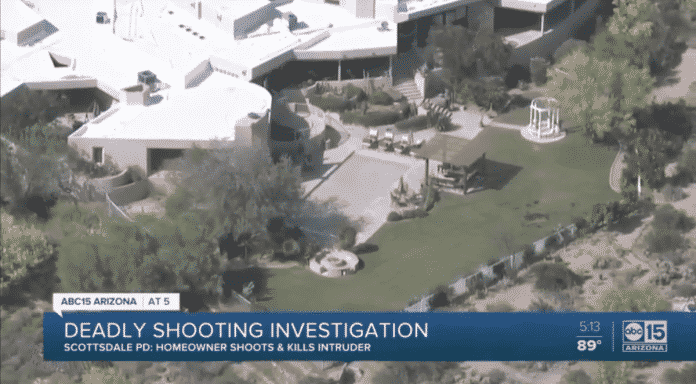 Police say that a man working on his property was alerted by the family dog about 10:45 PM that something was not right in the home. As the man entered the home to see what was going on he found an 18-year-old naked man confronting one of his children.

The intruder was holding a large piece of wood and charged the homeowner in a threatening manner. The husband and father of three drew his gun and fired two rounds at the intruder. The naked man died at the scene. The entire family was home at the time but none were injured.

Turns out that there was a reported burglary attempt at about 9:00 PM and that suspect’s description matched that of the now-dead home invader.

It’s hard for normal people to imagine the kind of crazy it takes to just walk into someone else’s home let alone do it naked and carrying a large piece of wood as a weapon. To then have someone like that then confront one of your children…. Well, that then moves it into the nightmare category.

I guess we have to give the family dog as least part of the credit for protecting the family this time. The earlier the warning that something bad is going down the better as it gives the defender more time to react. While it’s not mentioned if the homeowner had his gun on him or had to access once in the home, either way he was able to get to it quickly enough to stop the attack.

Do you carry your gun all the time when you are home? Even part of the time? Or does it come off and go into your home safe as soon as you arrive home? No judgment here but if it’s not on you at home how quickly can you get to it? Where do you have to go to get to it?

Take a little time to think through how you’d react to this kind of scenario. Think you’d have time to run to another level in the home to retrieve your gun in your bedroom before you could confront a naked man in the same room as one of your kids?