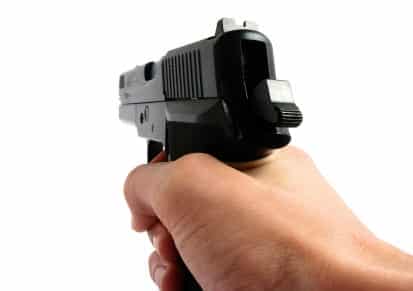 This is the first post in a series covering the topic of sighted fire vs. reflexive fire.

The controversy around the sighted vs. reflexive fire has been raging for a long time. How long, I am not exactly sure, but I am in my early 40’s and I don’t remember a time in my life when I hadn’t heard the arguments from both sides.

I am sure that the debate goes back to at least Col. Rex Applegate, who, if memory serves me correctly, advocated a reflexive fire position with gun completely out of your face, kind of a James Bond thing.

If there is a firearms history buff out there somewhere who can help flesh out the history of the debate, I am sure it will be interesting to see just how far back it goes.

On this particular subject, there has at times been a rather vicious discourse, which in my opinion, has been entirely unnecessary. Then again, when dealing with such a independent and individualistic community that the firearms community naturally attracts, this type of spirited debate should be expected.

As with any subject that becomes dogma and emotionally charged, people often end up giving a visceral reaction and saying things that they don’t mean, or perhaps jumping to conclusions they haven’t fully thought through. However, as is often the case, by listening closely to both sides of the disagreement, and objectively looking at both the hard and anecdotal evidence, we can admit that the arguments for both techniques do at least have some merit.

Unfortunately, due to the heated nature of the ideological schism the controversy has lead to unneeded bitterness and division in the firearms community that, by my estimation, is both unnecessary and unwarranted.

What I am going to attempt to do with this series of posts is show the two opposing sides that they have much more in common than they may initially believe and further more, I will attempt to demonstrate that the two techniques are simply the obverse and reverse of the same coin.

Allow me to first set the parameters for the following discussion.

What I am addressing is practical shooting accuracy for combative fire – the kind of speed and accuracy required to winning a gunfight. That is, getting your hits where you want them, under high-stress conditions, in order to end the fight of your life in your favor, in the shortest amount of time possible, which most often takes place in fractions of a second, in low light, and at relatively close distances.

Now, I know this is not a new concept, but it does bear repeating: When fighting with a firearm, you need both speed and accuracy to prevail. If you shoot too fast and can’t guarantee your hits, you aren’t causing the change (damaging to your adversary) that you should be striving for.

If, on the other hand, if it takes you too long to shoot, you could be allowing your adversary to either close the distance or get lucky with a spray and pray hit before you have had the opportunity to shoot.

This concept of not being able to eat your cake and have it too, is what we refer to as the principle of duality.

As I explain in our Tactics Manual, the principle of duality describes the fact that most opportunities and techniques have two sides that can be exploited to your advantage depending on where you find yourself in the tactical situation.
Like most things in life, tactical principles have give and take; that is you gain something and at the same time you lose something in the process.

The way we look at the sighted/unsighted fire debate at Pulse O2DA is that sighted fire and unsighted/reflexive fire are both valid techniques.

We believe this not only because of our own experience as well as those people we have worked with, but because some some very serious investigation in the this area has been looked at by men like Bruce Sidle and his Warrior Science Group. Bruce’s research coincide with the behavior that we see during our courses, both on the firing line and during the high stress Reality Based Training (RBT) scenarios that we specialize in.

With all of the apparently contradictory information out there, we need to ask ourselves: Why do so many high end operators and truly good shooters swearing by each technique?

Does this mean that one group is right and the other apparently equally competent group is obviously wrong?

Obviously it could mean that, but we don’t believe it does mean that. So what is going on here? They can’t both be right, can they?

Well, yes, they can.

I believe that they are both right because each of the techniques has it’s own tactical niche – a particular place and circumstance where that technique really shines and pays off.

To really wrap our minds around this, let’s start by looking at what a tactic is.

As we describe elsewhere: “A technique is a thing you could do by formula. This would include things like loading, malfunction clearances, reloads, how to present, aim, and fire a weapons system, gouging eyes, punching, using concealment and cover, ‘slicing the pie’, talking on the radio, and so on.”

In our view, the argument over which technique is better is a non sequitur, as both techniques are proven valid, and just because one has it’s particular tactical niche it does not follow that the other technique is any less valid when used to fulfill its particular niche.

Therefore, in our view, dedicating an inordinate amount of firearms training solely in one technique at the expense of another – because it is your firm belief that one technique is superior under all circumstances – makes about as much sense as never practicing malfunction clearances because your firearm hasn’t malfunctioned yet.

Furthermore, we believe that the argument over which technique is superior overall, arises over a failure to fully appreciate the individual techniques role in a tactic.

Now please bear with me, I am going to over-explain this, as I believe understanding this concept is vital if we desire to focus on the important things in our training program while sloughing off the unessential in order to maximize the limited training time available to us.

There is an old aphorism that states “Tactics are an art, not a science.”

While there is some truth to this dictum, for the most part the cliché is misleading because it gives one the distinct impression that in conflict, only art (judgment and creativity) and not science (techniques and procedures) can thrive and overcome adversity.

At PulseO2DA we believe that a tactic is neither purely art, nor purely science. A tactic is the product of both art and science, which when used appropriately and intelligently, multiply one another exponentially giving you true power and leverage.

That is to say that we cannot simply add judgment and creativity (art) to techniques and procedures (science) in an arbitrary and illogical manner and arrive at a sum called tactics.

Rather, we use each to increase the value of the other exponentially when they are combined in a logical and well-reasoned manner.*

In other words, a tactic is made up of one or more appropriate techniques strung together in a logical manner in order to fit your specific needs for the situation at hand.

For instance: There are two main techniques of taking cover; one is “hugging” cover, and the other is “pushing-off” cover (getting at least one giant step away from cover). Now, most of the time the appropriate technique for taking cover requires you to push-off cover. While learning the push-off is important and it is the correct technique most of the time, there are situations when the push-off would be both inappropriate and detrimental to your survivability. (Again, the principle of duality is at play here).

There is one more foundational idea that I would like to cover before I get back to the debate, and that is the body’s natural response to a high-stress event and the effects a high-stress event can have on the human body. But we will need to address this final portion in the next blog post.

*For those Marines out there, you will no-doubt recognize this is a bit of a bastardization of FMFM 1, so to all of you out there, forgive me for taking the liberties that I have.

Aldi Customer Who Shot Robbery Suspect Sues to get Gun Back

Ron Danielowski is the Chief Instructor and a founder of Pulse O2DA Firearms Training Inc. Ron has 25 years experience training thousands of civilians, soldiers, sailors, marines, and law enforcement officers. As a multi-agency accredited instructor, he has organized, developed, implemented, and overseen training for numerous federal agencies such as the Department of Energy, Federal Air Marshals, and the Department of State. He has worked extensively in both Afghanistan and Iraq in support of America’s military and federal agencies. Ron started his instructing career in the Marine Corps, both as a coach and a Primary Marksmanship Instructor. Ron is a Distinguished Marksman, member of the “President’s Hundred” winner of the Marine Infantry Team Trophy Match, and numerous other awards for shooting excellence. Ron has worked with some of the finest operators and combative instructors in the world, and it is his experience that provides the foundation for the Pulse O2DA training process. Ron can be reached at silentbob@pulsefirearmstraining.com, followed at Twitter “silent__bob” (double underscore), or feel free to like us at Pulse O2DA on Facebook.

Aldi Customer Who Shot Robbery Suspect Sues to get Gun Back