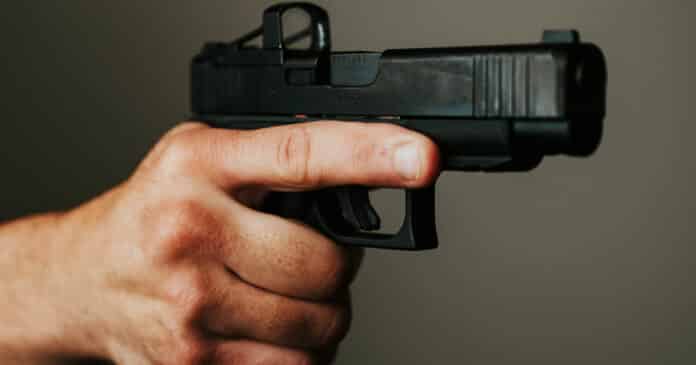 The modern technique of shooting the handgun, as solidified by Jeff Cooper in the mid-twentieth century, employs the use of two hands on the pistol. Prior to Cooper, handguns were fired, almost exclusively, single-handed. Once the modern two-handed technique was well established it became obvious that most people were able to acquire a higher level of competency with a handgun more quickly using this approach as opposed to single-handed shooting. This being the case, over the past several decades the shooting community has moved entirely to a focus on the modern two-handed technique, which has evolved further since Cooper. Single-hand shooting is often considered, and often taught as, an additional skill.

While shooting with two hands on the gun is the superior option for most, the ability to shoot well with only a single hand, and indeed either hand remains important and most shooters neglect training in this regard. A benefit of the handgun, as compared to long guns, beyond just being concealable and easier to carry, is the fact that it can be fired well with a single hand. Despite the ballistic superiority of long guns, a handgun warrants a primary place within the home defense arsenal because, should the home defender need to move around and perhaps carry children or otherwise occupy one hand, the pistol can be used single-handed.

Likewise, if one and is injured, the pistol can still be effectively employed. Violence on the street often begins as a hand-to-hand confrontation during which the detainment of one arm, or the possible injury of one arm, is likely to render the self-defender single-handed for the remainder of the fight. Obviously, the possibility of getting shot in one arm or hand is also ever-present in actual fights. Hands get hit with gunfire surprisingly often, as people tend to focus on the hands of an adversary in a fight. For these reasons, shooting one-handed should be viewed and trained for as a fundamental skill as needing to do so is quite plausible in a violent encounter for a variety of reasons.

Keep in mind that the use of two hands on a pistol is not necessary to enhance accuracy; rather, the use of two hands makes driving the gun from target to target more efficient and makes recoil control and recovery much faster. The most accurate pistol shooters in the world are the bullseye shooters that use a single-hand technique. Using both hands provides significant advantages for combat pistol shooting, but an accuracy benefit is not among them for individuals who are good at single-hand shooting.

One place in which many shooters go wrong in single-hand shooting is the reliance on the support hand to mitigate deficiencies in the trigger press. The support hand aids in offsetting the tendency to push the muzzle of the gun towards your opposite side when pressing the trigger, a natural result of the function of the finger. A right-handed shooter will tend to pull shots to the left of the target due to this, and a left-handed shooter to the right.

Upon first analyzing your own single-hand shooting technique, dry fire at a blank wall and watch what your sights do. Are your sights moving towards one side or another? This is likely due to the tendency of the finger to push the gun sideways. To mitigate this, experiment with the placement of the trigger finger on the trigger itself. You might need to place the trigger further in, or less so, depending on which way the sights are moving. Figure this out with both your dominant and support hand. I like to build my technique based on this trigger placement in single-hand shooting, then build the two-handed grip around that. I think relying on pressure from the support hand to overcome this tendency is a bad strategy for most shooters.

Also of importance, be sure to focus on maintaining a significantly tight grip on the gun while shooting one-handed. A lot of shooters tend to rely, predominantly, on the support hand in the two-handed grip to control the gun. The dominant hand should be providing a lot of strength in the grip formation, and when firing with only a single hand it is the only hand providing grip strength, obviously.

Being able to draw and deploy the gun with only a single hand is a fundamental skill. Being able to do this with both the dominant hand and the support hand is also important. Depending on where you carry your gun, accessing it with the support hand may be quite difficult, if not impossible. For myself, this access is one of several considerations that leads me to appendix carry, though you can access the gun with the support hand from the strong-side hip as well. The best way to practice this technique is in dry fire.

The ability to deploy and competently shoot the handgun with either hand alone is an important fundamental of pistol shooting and dedicating the time to this in your practice may not seem terribly fun, but it is required for building proficiency in this important skill.