Despite our many wins for Second Amendment freedoms around the nation, there are also a handful of states that have regressed. Several northeastern and west coast states have enacted a great deal of firearms restrictions that have done nothing to reduce crime but have instead done wonders in reducing the ability of honest citizens to defend themselves. If you have a carry permit in one of the “shall issue” states then a majority of other states likely reciprocate, and you can carry your handgun most places you roam. However, there are a few states that, as of the time of this writing, simply do not honor out-of-state permits, and likewise grant very few permits to their own residents. How, then, can you stay armed if you need to travel to or spend time in such restricted states?

The sad reality is when spending time in restricted states, legally possessing a handgun while in the state is most often going to be out of the question. However, in most places, having a shotgun or rifle in your possession while at your place of abode should be legal, as long as it is a weapon that does not violate any draconian state laws regarding magazine capacity or other arbitrary weapon features.

Let’s say you are spending a week at a cabin on the lake in beautiful upstate New York or California, and you want to be armed with at least a gun that you can secure in the cabin while you are there. Well, the handgun that you have a concealed carry permit issued for from one of the free states will not be permitted. What are your options? How about your favorite AR15? No. Most states that don’t respect your right to carry a handgun usually have a ridiculous and so-called “assault weapons” ban. Often, magazines that can hold more than ten rounds are prohibited, and guns are banned based on cosmetic features such as folding stocks, flash suppressors, or bayonet lugs. What, then, can you take with you?

There are actually quite a few long guns that are legal almost everywhere, but I will offer a few options for your consideration: a pump-action shotgun with a standard capacity tube (typically five rounds), a lever action rifle, or a pump action rifle. Any of these weapon types will protect the home with aplomb, as long as you practice with the particular mechanism. These are manually operated guns but are very fast if you are proficient with them. I think it is a wise idea for a dedicated shooter to be good with lever rifles or pump guns because these can serve as an option when spending time in restricted locations where handguns are illegal, and autoloading long guns are heavily restricted. The shotgun is perhaps the more formidable house gun, but a manually operated rifle can also serve defensive purposes well.

Shotguns that are manually operated pumps are generally not regulated in any states as of this writing. The one restriction that may be encountered is that of magazine capacity. As of this time, I cannot find a jurisdiction that prohibits anything with a tubular magazine of five rounds or less. If relying on a rifle with a tubular magazine, such as a lever action, or on a pump action rifle that takes detachable magazines, you should be good to go with a box magazine or tube that holds no more than ten rounds.

Therefore, pump shotguns like the ubiquitous Remington 870 or Mossberg 500, fit the bill nicely. Also, the common lever action rifle such as the Marlin 336 chambered in 30-30, or perhaps a lever gun chambered in a pistol caliber like 44 Magnum or 357 Magnum, will work nicely. A less-considered choice would be a pump action rifle, such as the Remington 7600, which operates like the well-known Remington 870 shotgun but takes detachable magazines and fires rifle rounds. These are all sound choices. 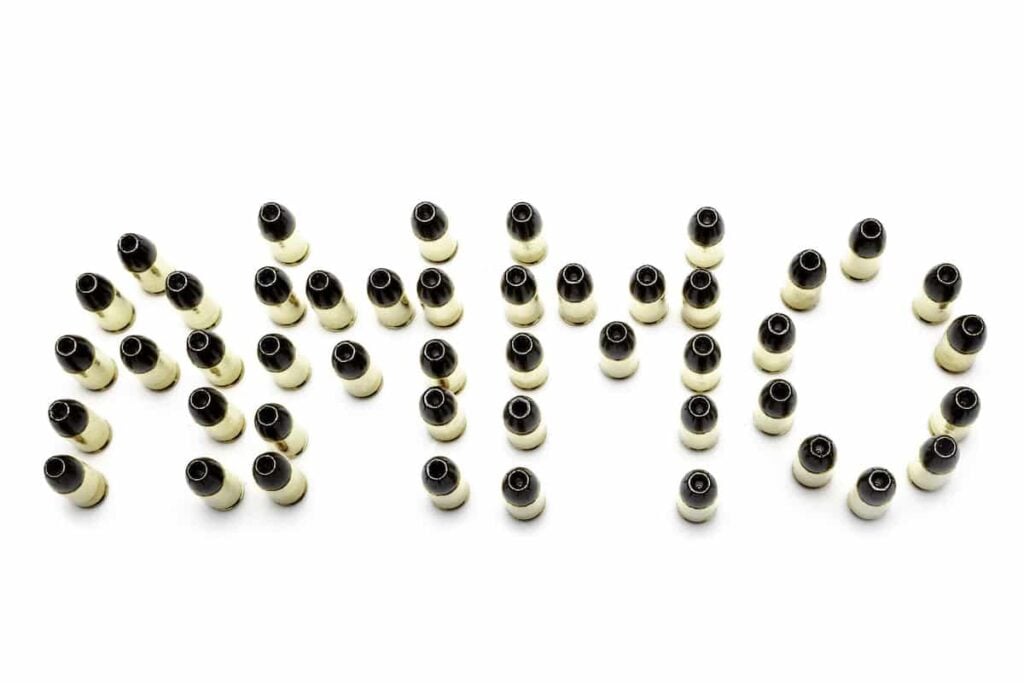 You also must consider the ammunition you will bring with you for your selected gun due to possible ammo restrictions. Do your research in this regard. The most glaring example of this that comes to mind is the state of New Jersey and their arbitrary ban on all hollow point ammo. Possession of hollow point bullets (the preferred choice for self-defense, of course) is a felony offense.

Beyond the legalities of possessing the ammo you will bring, another consideration might be the acquisition of new ammo. For example, New York State will only sell pistol ammunition to those with a state-issued handgun permit. If you are taking a long gun with you to such a state and plan to buy ammo for it, you may be out of luck if you have a pistol caliber rifle. Unfortunately, firearms and ammunition laws from state to state vary significantly with no rhyme or reason, and you need to be aware of these laws when traveling.

Transporting and Storing the Gun

All of the states that are restrictive, and even some otherwise gun-friendly states, typically forbid having a loaded shotgun or rifle in the vehicle. This means that, in order to transport the gun legally, you will have to abide by the federal firearms protection act, which stipulates that the gun must be unloaded and locked in the trunk, or be otherwise inaccessible to the occupants of the vehicle, and the ammo must be stored separately. The weapon, therefore, will be unusable as a defensive means until you arrive at your destination.

Likewise, some restrictive states mandate that the gun be locked up and stored in a way that is inaccessible to unauthorized users. While I am opposed to such mandatory legal measures, securing the firearm in a home or vacation destination makes good sense anyway, and taking a locking case or at least a trigger lock with you is indeed advisable. I generally recommend keeping long guns in “cruiser ready” mode and not chambered, which means the magazine or tube is loaded, but the gun has an empty chamber. This makes for a safer situation while the gun is stored. To bring the weapon into action the lever or pump would simply need to be run to chamber the first round.

For those of us who believe in our constitutional freedoms traveling to restricted areas is not optimal. However, bringing along a permitted firearm is undoubtedly better than being unarmed. As long as you do your research to ensure you are legal at your destination, going armed is an option, even if you are unable to be armed with your preferred weaponry. Bear in mind that certain cities, like New York, generally prohibit all firearms, so be aware of this. However, most states and jurisdictions permit the aforementioned types of firearms.