Man with CCW Called a Good Samaritan for Intervening 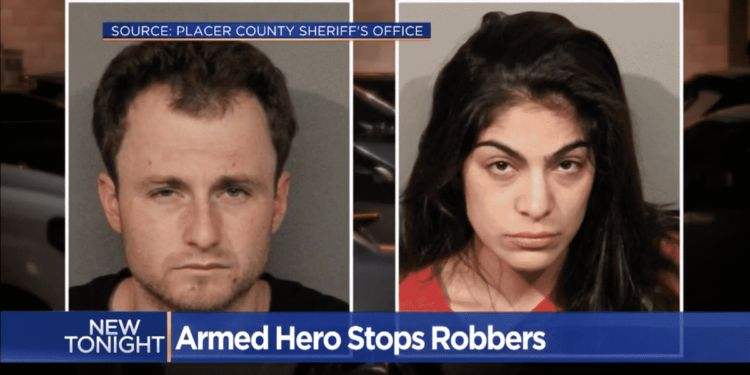 A man sitting in his truck in the parking lot of a grocery store is being called a Good Samaritan by the Placer County Sheriff’s Office today. After noticing an altercation between a man with a knife and a security guard, he decided to intervene.

Last Sunday night around 8:30 PM, a loss prevention security guard noticed 25-year-old Brandon Smith and 23-year-old Elizabeth Almand shoplifting inside the Raley’s grocery store in Loomis, CA which is about 25 miles northwest of Sacramento, CA. When the guard confronted them in the parking lot, Brandon Smith drew a knife and then a struggle ensued.

As the two went to the ground, Brandon dropped the knife and told Elizabeth Almand to pick it up and stab the guard.

A man with a California Concealed Carry Permit witnessed the struggle while sitting in his truck decided to spring into action and draw his weapon. He ordered Almand to drop the knife, which she did and then held the two shoplifters at gunpoint until officers arrived on the scene.

Your chance of getting hurt in a knife fight is exceptionally high. Luckily, the security guard was not seriously injured. He walked away from the incident with a lacerated finger.

“We are grateful their trained officer was present in this situation and for the Good Samaritan who offered additional support.”

A regular shopper at the grocery store also says:

“I’m glad that that person had their CCW and had it with them and took care of it.”

Talk about being in the right place at the right time. Who knows how this would have gone if this concealed carrier had not been there. Concealed Carry Permits can be very hard to get in certain counties of California, but luckily for this guard, a concealed carrier was there to back him up.