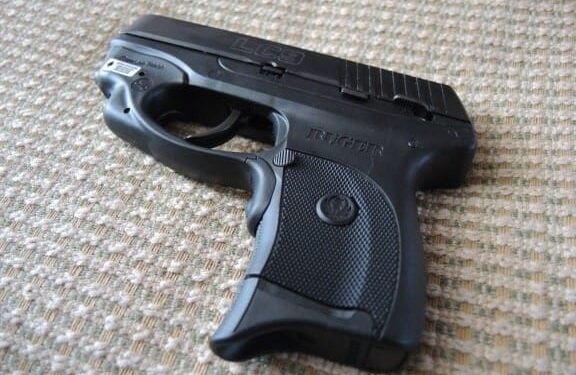 The Sturm Ruger company is arguably one of the best and most successful small arms manufacturers in the world. They opened their doors in 1949 and never looked back. Today they offer everything from rifles, to shotguns to handguns. We are going to concentrate here on their handgun line, and specifically the LC9. Released in 2011, this is one of the best offerings made for concealed carry.

The box contains the gun, two 7 round magazines, a lock, instruction manual, a key and a soft zippered carry case.

The LC9 is a nice middle ground between the LCP and the SR9c. It’s slightly larger than the LCP, and a fair amount smaller than the SR9c. If you intend to carry concealed, this is probably one of the best small framed guns I’ve seen yet. Officially weighing in at 17.7 oz, my scale showed it weighed 17.9 ozs (+/- .5 ozs). It weighed in at 18.4 ozs. With the 9 round magazine inserted. It has an overall length of 6” and a height of 4.5”. The width is claimed to be less than an inch, at 0.90”, which, for any gun, is narrow. It has a single-stack magazine capacity of seven 9X19MM rounds or alternatively 9 rounds with a separately purchased optional magazine.

It comes equipped with a windage adjustable three dot sight system. With this model, I opted for the Crimson Trace laser sight. I have one attached to my SR9c and it works. The laser is activated by pressure applied by your middle finger on the front of the grip. It falls there naturally, so you never have to think about activating the laser. Grab the grips in the proper hold, and it’s on. It is that simple.

Like it or hate it, Ruger’s handguns all have controls in the same places and operate on the same principles. Once you own a Ruger, you can pick up nearly any other Ruger and the controls and feel will instantly be familiar to you. Personally, I like this kind of consistency. That’s not to say other manufacturers don’t follow this theme (as I know Glock does, for example), but not all manufacturers do. Ruger includes a manual safety, slide release, loaded chamber indicator and a take down pin. I know that sounds like a lot of stuff, but in fact they all have a purpose.

In particular I like the loaded chamber indicator. It pops up behind the ejector port to let you know there is a round in the pipe. It is painted red on both sides to provide a further visual aid, and because it sticks up slightly, a quick sweep on the top of the gun in the dark lets you know you don’t have to make noise racking the gun and drawing attention to yourself unnecessarily. This gun is also equipped with a magazine disconnect, which, in my opinion I don’t particularly care for. However, that feature makes the gun compliant in some of the gun unfriendly states (California). After all, the loaded chamber indicator should take some of the stupid out of gun handling. Nanny states….

The usual Ruger fit and finish is evident everywhere on this gun. The lower section of the gun is glass filled nylon and the slide is made from hardened alloy steel. The nicely scalloped grips are contoured to fit one’s hand like a glove. There is checkering in all the right places, and overall, this is just a good-looking gun. All of the gun’s surfaces have been beveled to provide better holstering/drawing ease. The included 7 round magazine comes with a pinky extension, which I like a lot. Ruger also includes a flat base plate if the extension is not to your liking. For me, I appreciate the extra real estate and left mine in place. As mentioned above, you also have the option of buying extended 9-round magazines. The part number is 90404 and they sell for $44.95. I bought two and they are great for the extra rounds and extra surface for your grip. But, from the factory they are a little tricky to insert, you have to apply a little extra force to seat them properly. I didn’t experience that with the included 7-round magazines. The slide is nicely tapered at the barrel end, which eliminates any sharp edges at the front end. The rear of the slide has the usual scallops on either side to aid in gripping it for racking the slide.

This is a hammer fired pistol, and as mentioned earlier, double action only. The hammer does not extend beyond the back of the pistol, so there is no danger of snagging it on clothing. The gun does not have a double-strike capability, meaning that if it misfires, you cannot pull the trigger again, you must cycle the slide manually to reset the hammer.

One thing I really don’t like about this gun is the L-O-N-G trigger pull. My scale shows the force needed to depress it at 6 pounds. While the trigger is smooth through the entire swing, it starts somewhere in Texas and ends in North Dakota. Did I say LONG? I know this is a double-action only gun, but, really? At the range I had three examples of Ruger excellence to work with. I took the SR9c, the new SR 45 and this LC9. The trigger on the LC9 was so different from the others that I couldn’t pick it up and use it with any consistency after using one of the other two. While I fully understand that this was designed as a defensive carry gun and not a range gun, I still believe that Ruger could have done with a little less swing in the trigger. It breaks almost at the absolute bottom of the swing within the trigger guard. It resets somewhere near the top.

At the range this gun was great when it came to reliability and accuracy. I spent some time zeroing in the laser at about 10 yards. Once the firing started, I did not experience a single misfire, ejector fail or jam. I shot 200 rounds through it on the first day, and to my surprise, there were no issues whatsoever. My SR9c wasn’t that good out of the box. Accuracy was spot on. The laser was pin-point accurate and never failed during my tests. It remained lit no matter what angle the gun was at, or how rapidly I fired it. I practiced a few double-taps just to see how it fared. Needless to say, I was very satisfied with it. Normally, a short barreled gun tends to have a fair amount of recoil management to go along with it. The LC9 was easy to keep on target. The three dot sights are great, but having that laser made a tremendous difference in accuracy. I found myself using the laser exclusively and not utilizing the iron sights. This, in my mind gives credence to the utility of the laser sights. That is not to say that the iron sights are useless, on the contrary, I like these sights very much. Even though there is a short sight radius, these are easy to pick up when looking down the barrel. I found it very easy to acquire a good sight picture. Even performing double-taps with it, the recoil was manageable and I could pick up the sights for the second shot very easily.

Taking the gun down for cleaning is relatively easy. There is a take-down pin that is held in place by a little switch plate on the left side. Sliding the switch down allows access to the pin. Moving the slide slightly rearwards allows for removal of the pin by pushing it out from the right side. From there the slide comes off the front of the gun. You have to remember to put that switch back in place when reassembling the gun. For those of you who’ve already lost this pin, you can find it on Ruger’s website for $2.00. The part number is CP03750.

I bought a pocket holster from Amazon.com from Federal Holsterworks. This is a great little holster. I found this gun extremely easy to carry concealed. Since it is so small, it makes it very easy to conceal in either my pocket holster, or a hybrid holster. At no time did I find it to be uncomfortable and no one seemed to notice it even when it was stuffed in the front pocket of my jeans. I carried inside my coat pocket as well. It is just easy to carry. I’m not much for ankle holsters, but I imagine this would be just as comfortable there. I found myself reaching for this when heading out the door more often than my other daily carry.

Overall, this is a quality offering from Ruger. It’s easy to conceal, easy to fire (despite the long trigger action) and best of all, it works reliably right out of the box.