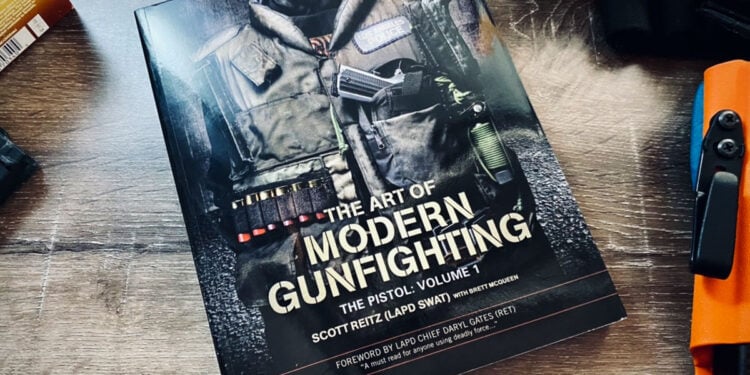 The Art of Modern Gunfighting DEALS

In the world of Law Enforcement gunfights, the national average hit rate is somewhere around 20%-30%. Out of every ten rounds fired, only two or three actually hit the bad guy they are being fired at. We can make all kinds of excuses for it. You know, it is dynamic, bro. What do we say, though, when a guy who has been in a handful of gunfights is still batting 1000? I know what I would say, “we might want to listen to that guy!”

That guy is Scott Reitz, and he wrote a book titled The Art of Modern Gunfighting. However, here is the trick: don’t order this book off Amazon. It will cost you just shy of a Benjamin on the great online book purveyor’s website if you want an actual physical book. Instead, go to the International Tactical Training Seminars (ITTS) website and buy it directly from them, where it will cost $35 and come with a promo code for $50 off an ITTS class should you ever want the in-person experience.

Editor’s Note: The Kindle version of the book is only $19.95 on Amazon.

Where I Heard About Scott Reitz

Before a year or two ago, I really had no idea who Scott Reitz was or why it really mattered. What piqued my interest was when Reitz was referenced in John Hearne’s Who Wins, Who Loses, and Why presentation. Reitz was involved in a handful of shootings as an LAPD officer and member of LAPD SWAT. According to John, Reitz only fired eight rounds across all of his shootings. Each round hitting its intended target and accomplishing the required task. This puts Reitz on a level rarely seen, and automatically we should all want to know what magic wizard potion this guy drinks so we can be as cool as him.

Where to Find the Potion

It just so happens he wrote some of that magic wizard potion stuff down in a 200-page book of his views on shooting, gunfighting, and how to best prepare ourselves. Reitz is a product of the “modern technique,” and it comes through in his preferred style of combative application of the pistol. While it may get labeled as dated by some people, it is hard to argue with the results. There was a whole generation of accomplished gunfighters using these techniques with great success. They lived and worked in a time when the use of this level of force was more acceptable, and they were refining their techniques through repeated use in actual fights.

Structure of the Book

The Art of Modern Gunfighting is split into several sections and gets into more than just shooting technique. About 1/2 of the book is spent on the actual technique and understanding the application of key concepts. It is a good primer on the core aspects of shootings. The remainder of the book is split between sections on combat mindset, understanding the use of deadly force, application of firearms safety, and gunfighting in general. Personally, I found the sections not about shooting technique the most interesting. They are worth the cost of the book all by themselves.

As far as shooting books go, this is one of the best-illustrated books I have seen. There are many high-quality pictures showing how a technique is supposed to work, usually for more than one type of handgun. Duty-sized revolvers even get covered with some detail. Not something found that often, and if you are like me and have an appreciation for the revolver, a nice treat. I won’t give away any secrets, though. You will have to read the book.

There are not many books I would consider a must-have for anyone who takes defensive-style shooting seriously, but I think this one would make that list. It is well-executed, information-dense, and high-quality information from someone who has tilled the dirt and done the work. For the price of a couple of boxes of 9mm, this is a worthwhile read and handy to have on the shelf to review every now and then—a good fit for both the experienced shooter and the person just getting into the game.

The Art of Modern Gunfighting

The Art of Modern Gunfighting DEALS

We collect information from many stores for best price available

Learn from the Best: Quick and Easy Dry Fire Drills from Jerry Miculek

Learn from the Best: Quick and Easy Dry Fire Drills from Jerry Miculek