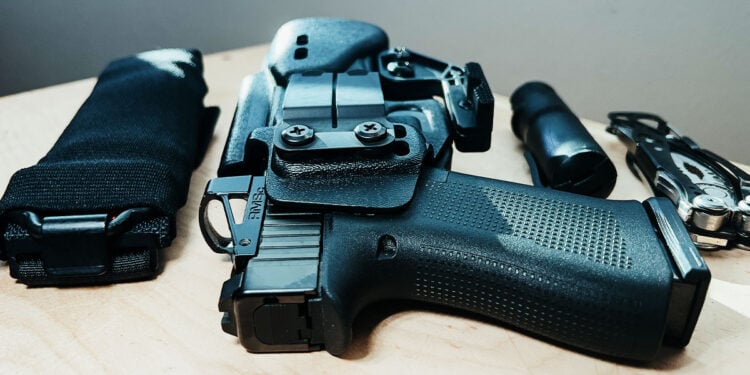 When it comes to carrying life-saving equipment on your body, you should give significant thought to where and how you carry those tools. Any tool that is a life-saving emergency implement, such as a pistol, blade, medical implement, or less-lethal weapon, does you no good if it can’t be deployed quickly and efficiently when needed. Therefore, practicing in the deployment of each tool is necessary. Beyond this, selecting a consistent location on the body for each of your tools is in order so that consistent and predictable deployment of each tool can be accomplished under stress.

Two examples that come to mind regarding tool location both involve police officers who shot someone when lethal force was not warranted and, afterward, claimed they meant to tase them with their taser rather than shoot them with their firearm. Many have cited these incidents as a reason to keep less-lethal and lethal tools in distinct locations of the body, typically on opposite sides of each other. The issue is not this simple, however, as most police departments require that the taser be carried on the support side to avoid such problems. These incidents have occurred anyway, so the problem appears to reside in training far more than tool location. However, such a separation may also play a role for the civilian self-defender that carries both lethal and less-lethal tools.

Can you deploy it quickly?

More important in the argument for tool location consistency is, simply, the ability to deploy the tool quickly. The most obvious example will be that of the concealed carry pistol; most people are far better served to keep their carry gun in the same location of the body, whenever possible so that familiarization with the draw process from that place can be trained and maximized. Some argue that they can effectively move from one carry location to another, and some people undoubtedly can, but I presume most are like me and simply function better with the pistol kept in a consistent location if possible. Sticking with such consistency makes it a natural reflex to reach that position for the tool when under stress but also fosters much more skills development in the consistent draw stroke.

Where do you carry your knife?

Apply this thinking to your other tools that you carry on your body; where do you carry them. Consider your knife. Where does it ride on your body? Is it always in the same spot, or is it in a different pocket at any given time you leave the house? If you argue that you carry a knife, but not for defensive purposes, I still encourage you to consider carry location consistency. The blade is a crucial rescue tool, whether for the rescue of yourself or others. Consider coming upon a car accident, and a child is inside a burning car; you open the door or smash out the window, then fumble around to find your pocket knife to cut the child free.

Consider being flipped upside down in your own vehicle while it is filling with water and fumbling to find your knife. There was an incident in which a child got a hem of clothing stuck in an escalator and began getting sucked into the machine. How fast could you produce your blade and free a child in such a circumstance? Whether utilized as a force option or not, keep your blade ready for quick deployment and in a consistent body location.

How about pepper spray?

This principle certainly applies to less-lethal tools as well. What good does pepper spray do you if you can’t deploy it on time to use against an encroaching less-than-lethal threat, such as an aggressive drunk or a road raging fool? Pepper spray, or any other less-lethal weapon, should be in the same body location at all times because when it is needed, it will be needed immediately. It is delusional to think that you will have time to fish pepper spray out of a pocket, not knowing which pocket you put it in or to find it rolling around in the bottom of a purse or bag. Keep your pepper spray clipped to a specific pocket on your preferred body side, or have it attached to your keys which are kept in a consistent location.

Where do you carry your medical gear?

Another tool that probably receives far less thought than weaponry, but deserves just as much consideration, is medical gear. I am an advocate of keeping at least a tourniquet on body and further trauma gear in a pack that is kept close by. The tourniquet, however, is best kept on body because an arterial bleed that occurs in an appendage can literally lead to the loss of consciousness in thirty seconds and death within a few minutes. If you sustain such an injury and have thirty seconds to self-apply a tourniquet, do you want to begin the process by feeling around your pockets and other locations to figure out where you put the device, to begin with? The tourniquet should always be in a consistent body location, whether that be in a pocket, on the beltline, or in an ankle pouch.

And lastly, your phone…

Finally, I will point out another tool that should be kept in a consistent body location that might come as a surprise: your phone. That’s right. What if you find yourself in an emergency situation, such as having your dominant hand holding a pistol while you hold someone at gunpoint and need to phone emergency services? What if you are in a medical emergency, holding pressure on a wound, and have only one hand available to call 911? Where on your body is your phone? Do you want to take the extra time to locate it and take that mental capacity to do so away from the emergency at hand? Your phone is an important part of your emergency plan, so keep it in a consistent location. Consider keeping it accessible to the support hand so that you can access it if the dominant hand is holding a gun.

Essential rescue tools, be it the gun, blade, less lethal, medical, or your communication device, should be kept in consistent body locations so that you can quickly deploy the needed tool when under the stress of an emergency. Give it some thought.