Traveling Safely and Legally with Guns and Ammo on Airlines

Traveling Safely and Legally with Guns and Ammo on Airlines 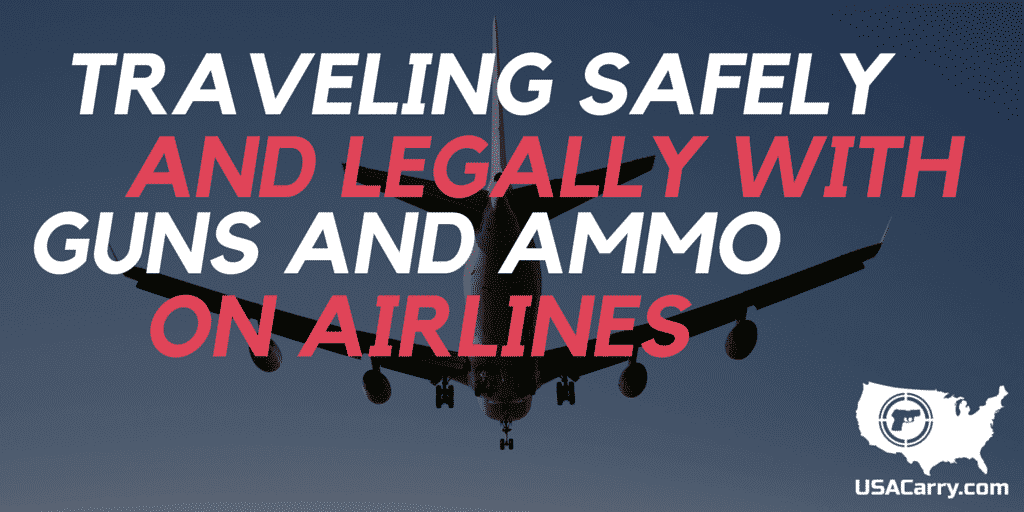 Well, my wife and I are getting ready to attend a Sig Sauer Academy handgun training course in New Hampshire and must fly from Florida into Boston, MA near the Academy. We are considering taking our own handguns and ammo with us for class and do everything safely, “by the book” legally, not lose our guns, and not take a lot of extra time. Even if we were not attending a training course but were traveling to a state that has reciprocity with our CCW License state, why not take our guns for “what if” situations?The Academy can loans us guns and sell us ammo, but we might use what we’re comfortable with and already have on hand. So, we decided to pre-plan as much as possible. We had several questions and there is information travelers with guns need to know. We made a long list of our questions, called TSA and United Airlines, and asked several questions of two very nice, patient, and knowledgeable agents. I want to share what I learned with you to help you and save you some aggravation if you fly with guns and ammo. Know that with limited exceptions for law enforcement officers (who may fly armed by meeting requirements of CFR 1544.219, Carriage of Accessible Weapons), all firearms, ammunition, and firearm parts may only be transported in checked baggage.

First, I went to the TSA website and got some good information, but a lot of it was general and did not address some specifics that I wanted answered. Also, I learned that these gun travel rules change FREQUENTLY, so check for current updates when you fly with guns. Also, there are certain limited exceptions for law enforcement officers. Here is the website address for you and some of the information I got there:

1.  Travelers may only transport UNLOADED firearms in a locked, hard-sided container as checked baggage. All firearms, ammunition and firearm parts, including firearm frames, receivers, pepper spray, clips and magazines are prohibited in carry-on baggage. (I knew this.)

3.  In addition to TSA security rules on transporting firearms, airlines, as well as state, local and international governments have additional rules that may vary by location. (They DO vary a lot, especially by AIRLINES.) Please check with your airline and with states, cities, and countries you will be traveling to and from to become familiar with their requirements and ensure you are compliant with their laws.

Here are some Guidelines to help you in packing your firearms and ammo for travel:

TIP: Don’t slip and say “I have a gun” for obvious reasons. The Agent or you PLACE the DECLARATION FORM inside your luggage or GUN CASE (varies by airline) and LOCK everything up. YOU keep the key or combination.

To the right is a Delta Airlines Form that my wife signed on the reverse side on her recent trip from San Francisco-Sacramento, CA to Pensacola, FL traveling with a firearm. She purchased a small metal lockable box by SentrySafe at Wal Mart for $12 that was plenty big to easily hold 2 handguns, magazines, etc. You can also pay much more and get a Pelican Storm Case or a GunVault Nano Vault. We also have used the small metal box to travel with ammo. It easily holds 10 boxes of 50 rounds each of 9mm ammo, with a total ammo weight of a little over 14 pounds. That weight means you would have to pay extra because you went over the usual airline 11 pound ammo weight limit each. So, you might want to travel with 7 or 8 boxes of ammo max to avoid extra charges. More about this below. I suggest taping your ammo boxes shut to prevent any accidental spillage.

After digesting all of these “MUST” requirements online, I still had questions so I called the TSA at 1-866-289-9673. The TSA agent was very friendly and repeated the above information and gave me some other information.

He told me there are NO TSA fees associated with bringing a firearm on an airline. He told me you can have at least 2 pistols in your checked luggage if inside a hard-case locked container for guns. If any more are desired, he said check with the airline. He said there are no TSA Declaration Forms, but each Airlines has its own form and they are different. Mainly, he said that EACH PERSON with a gun MUST complete one initially and DECLARE their guns to the ticket agent. He said the ammo AND guns can be packed together in a gun case or separately, but just NOT inside the mag or chamber and the ammo must be packed solidly in a suitable container made for ammo. He recommended NOT having the empty mag inside the magwell like it’s ready to fire, because they will treat it as if it is loaded and probably will further inspect and delay you. He said the mags can be in the same gun case as the firearm. He said there are NO TSA limits on the amount of ammo you may bring, but that individual airlines DO have ammo weight limits that vary. A firearm in a locked HARD-sided container may be placed inside SOFT-sided luggage. My wife just did that on her recent trip from Sacramento, CA to Pensacola, FL with Delta Airlines without problems. She had another option of placing her firearm DIRECTLY inside her locked, HARD-sided luggage WITHOUT it being encased in a separate locked container. Again, check with your airline.

With that in mind, I visited the United Airlines’ website and the firearms section at:

http://www.united.com/web/en-US/content/travel/baggage/sports.aspx. Then, I called United Airlines at 1-800-241-6522 to verify the same information the TSA agent told me and to learn United’s requirements and limitations. United Airlines limits you to 11 pounds of ammo EACH. The agent said the number of rounds of ammo is not a problem, but the weight of the ammo is. If you go over the 50 pound limit on a checked bag, the extra fee is $100 up to 70 pounds, then higher. So, I weighed my ammo (different brands) and here is what I found (approximately):

It is required that we each bring a minimum of 250 rounds (5 boxes) for our training course, so with the United 11 pound ammo limit EACH we are fine, according to the United Airlines agent. But, we have to consider the weight of the 3 mags for each of us, speed loaders, hearing protection muffs, range bag, range clothing, and other necessary equipment, etc. Just know we will go over the weight restrictions and have to pay more for the added weight. So it goes. Also, the agent told me NO Curbside Check-In of firearms is permitted and firearms are accepted only from a paying customer who is 18 years of age or older. She told me the slide does NOT have to be locked open nor have a safety flag in it. The agent said that I probably would be escorted to a private area/room and be present when the Agent opens my gun case to inspect it with my key or combination. Then the Agent will return the key to me. This will take an extra 30-45 minutes, so she recommended that we arrive even earlier than the hour prior for this process.

I must mention that someone from the Academy mentioned that some of the northern states are more strict than others about handling and dealing with shipment of firearms and those who travel with firearms…. that I should be prepared for this and possible delay. Some even suggested that I NOT bring my own guns and ammo to the training because of the extra time and hassel involved. For example, the NRA Institute for Legislative Action (ILA) has issued a special advisory for New York and New Jersey airports. Authorities at JFK, La Guardia, Newark, and Albany airports have been known to enforce state and local firearms laws against airline travelers who are passing through the jurisdiction, despite federal law that protects travelers. I have heard from some that even persons traveling in full compliance with federal law have been arrested or threatened with arrest, but litigation is ongoing. So travelers should strictly comply with the Firearm Owners Protection Act (FOPA) for their “Safe Passage” and check laws and regulations at your destination before traveling. “I didn’t know it was illegal” will NOT work.

I suppose we could ship our guns and ammo ahead there, but still might be more time, cost, and trouble. I do fully support the intent of the strict policies, guidelines, and rules and will comply without hesitation. The minor inconvenience is a small price to pay for the major benefit, priority, and overall goal of protecting ourselves and diverting any possible trouble from weirdos or terrorists. Something to think about for all of us. Some final tips: If you can avoid it, do NOT fly with high-value firearms; write down the serial numbers of firearms you are transporting and keep the list separately with you; check the airline’s firearms insurance policy (usually very limited) regarding theft, damage, and replacement ; and check your luggage with the firearm inside immediately upon arrival at your destination; and report missing or stolen luggage with firearms inside immediately.

Hope this helps you and remember to double check this information as it changes frequently, by jurisdiction, and by airline.

* This personal opinion article is meant for general information & educational purposes only and the author strongly recommends that you seek counsel from an attorney in your state or jurisdiction for legal advice and your own personal certified weapons trainer for proper guidance about shooting & using YOUR firearms, self-defense, stand your ground law, and concealed carry. This is not legal advice and not legal opinions. It should not be relied upon as accurate for all shooters & the author assumes no responsibility for anyone’s use of the information and shall not be liable for any improper or incorrect use of the information or any damages or injuries incurred whatsoever.

© 2014 Col Benjamin Findley. All Rights Reserved. This article may not be reprinted or reproduced in whole or in part by mechanical means, photocopying, electronic reproduction, scanning, or any other means without prior written permission. For copyright information, contact Col Ben Findley at ColBFF@gmail.com.

Who Would You Attack?

Who Would You Attack?