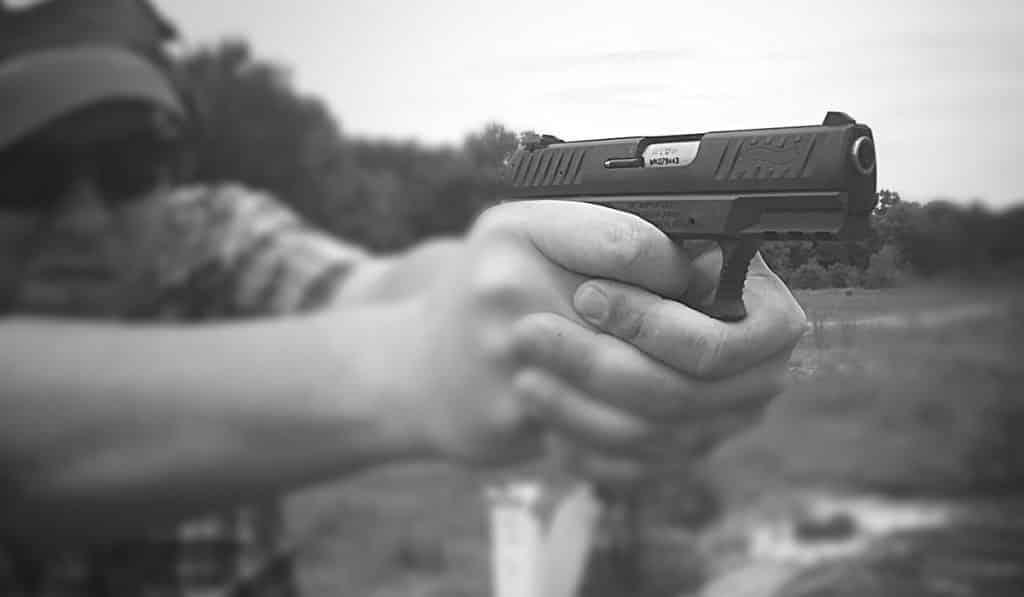 I have never been a Walther guy, quite honestly. Their handguns do not pique my interest for some reason, even though I reside in the same state as their US headquarters. That is, until I tried the Walther CCP on a whim at the local indoor range, and then bought one. What I really like about this gun is the size. Not just the length of the barrel, or the size of the grip, but the whole package. Often time’s guns that try to be small are too small, or have some weird boxiness or something about them that just doesn’t work quite right. The CCP seems to hit that perfect balance of not too small, but not too big either. It is a tough line to walk, but I think Walther might have pulled it off with this one.

If you are not familiar with the CCP it is an interesting breed from the start. The operating system is a delayed gas blowback, similar to the HK P7 from a bygone era. Instead of using some type of locking system to keep the gun in battery until the chamber pressure drops to a safe level like most other handguns in this class, it instead diverts some of the gases propelling the bullet down the barrel into a separate chamber. There is a piston attached to the slide and resting in that gas chamber that when pressure is applied, counteracts the rearward movement of the slide. Once the bullet has left the muzzle, the pressure in the barrel and consequently the gas chamber will drop, allowing the slide to move rearward and cycle a new round into the chamber. It is an interesting operating system, and Walther claims it reduces recoil, but more on that later.

The first thing about the CCP that jumped out at me is the grip. I am a grip texture guy, and I am picky about it. Most of the guns I buy end up with some sort of grip texture modification. The CCP is the first gun I have shot in a while that I felt didn’t really need any grip work. I think this is a function of both the texture that is already there, and the contours of the frame itself, which if you have seen a Walther are usually a little different than other handguns on the market. The Walther texture on the CCP is just enough to have a solid purchase on the firearm, but not so aggressive as to cause problems with wearing out clothing, or being so aggressive it hurts to really bare down on. The Walther does a good job of landing right in the “Goldilocks” zone, grippy enough, but not too much.

The CCP does have an external safety. I know some people do not like external safeties, but as long as a safety is well designed, I don’t really care. The crew at Walther did a decent job on their safety design for the CCP. It is easy to access, not hidden behind any other levers or fences to prevent accidental activation or deactivation, and is large enough to work while establishing a grip on the gun without being obtrusive. I would say it could probably even be a little larger and not be a big deal, but I am satisfied with it being the way it is for now. The activation is positive and smooth, offering enough resistance that I know I am working the safety, but not so much as to make it difficult to manipulate. The issue perhaps is that it is not ambidextrous, but I am generally okay with that. If I were left handed and shot left handed all the time, I probably would not be though.

Sadly, the aftermarket has not jumped on manufacturing sights for the CCP yet and the only aftermarket option I am aware of is XS Sights. I can manage with the factory sights, but it would be nice if there were more than one other option because sights are all about personal preference and there can be significant amount of variance in what one person likes vs. another. The factory sights are polymer, which I am always distrustful of. Polymer sights tend to not be very durable and have the bad habit of flying off the gun when they shouldn’t. I get that polymer sights reduce the cost of the firearm, but I would pay an extra $50 to have metal sights that I would be more comfortable with.

A few hundred rounds went through the gun in this evaluation, and gun was a bit ammo picky. It ran brass cased 115gr Federal Range & Target just fine, also ran 124gr Blaser Brass just fine, and Winchester 124gr NATO. It did not like Freedom Munitions American Steel, only making it through one magazine before choking hard enough that I abandoned the use of that ammo.  It also fed and fired Federal Hydra-Shoks that I had lying around just fine. I would probably say stay away from steel cased ammo in this gun, or maybe at least try just a box or two to verify function before splurging on several cases of it. Otherwise, the gun proved to be reliable.

Despite the “SOFTCOIL” marketing, I do not find the recoil impulse of the CCP to be soft. Not by any stretch. Even compared to a handgun in the same class, like the S&W M&P Shield, it has a sharper recoil impulse. One person I loaned the gun to for a couple magazines worth of ammunition related the recoil to a .45 ACP 1911. I would say perhaps similar, but sharper. I would guess, although I have no proof, that the slide velocity on the CCP is relatively high, and that contributes to the sharp recoil impulse. Working bill drills on a USPSA A-Zone at 7 yards I could only drop the splits into the mid .30 second range, as compared to the low .20 second range on larger guns. Not a big deal, I think that is still plenty fast, but speaks to the recoil impulse and controllability of the handgun. If the “SOFTCOIL” thing was really a thing, I would expect the gun to be more controllable and the splits faster.

The trigger characteristics are a big part of how “shootable” a gun is. I am by no means a trigger snob, and have put in plenty of time on DA revolver triggers, or what are generally considered to be subpar striker fired triggers like the SDVE series of pistols from S&W. I would consider the CCP to be marginal, and definitely not something to write home about. It is not heavy, but is not super smooth either. That lack of smoothness is what I think really detracts from the quality of the trigger press. I am a DA trigger sort of guy, so long triggers don’t bother me, but I do like a smooth trigger and this one doesn’t quite get there. Of course, this gun is brand new and has less than 1,000 rounds on it, so perhaps with time those trigger characteristics will improve. The reset is also a bit long and subdued, but I feel is really not that big of a deal.

Even though the trigger was less than ideal, I was able to pull off good accuracy with the CCP shooting Winchester 124gr NATO at 25yd. I typically test accuracy as what I am capable of doing with the gun, not the true mechanical accuracy of the gun. I am more concerned with my own interface with the handgun and what that allows me to do with it than I am with what the gun is capable of doing locked into a vice or on a rest. I fired a 10 round group from standing, unsupported, at 25 yards. Initially I held the sights like I normally do, splitting the bullseye nearly in half with the front sight. That is the first round that hit low at 6 o’clock in the pictured target. I then adjusted and held the sights so that the dot on the front sight was lined up with the center of the bullseye and continued the string. This is commonly referred to as a “drive the dot” sight picture, where the rounds impact behind the front sight as opposed to at the top of the front sight. Not my preferred sight set up, but I was able to do good work with it, so I guess complaining would be a bit out of place.

Off the range, it was time to clean the gun. The CCP does require a tool for a basic field strip, and one is included to aid in the process. I was curious though if a more common tool, a ballpoint pen, could serve as a stand in. It would turn out that a pen works incredibly well as a Walther CCP takedown tool. I would suspect any item like a small screwdriver, a small punch, or probably even an appropriately sized and shaped stick would get the job done. Once apart, the CCP breaks down into three basic components, the slide which has the gas piston attached, the recoil spring, and the frame which has the barrel attached. At the time of disassembly the handgun had just over 200 rounds on it. It seemed to be particularly dirty for a gun with only 200 rounds on it, but that is probably because I was a little too liberal with the lubricant at first. I thought the takedown process was pretty easy, and reassembly just slightly trickier. Getting the piston to line up with the gas chamber required a bit of a balancing act. Walther has a pretty good video on the disassembly and assembly process, as well as the factory recommended maintenance of the firearm.

To wrap it all up and put a bow on it, is this gun worth the retail price? Well, only you can decide that. It is competing with guns like the S&W Shield and Glock 43, and I think in general holds its own if judged strictly on performance. Where it lacks compared to the other players is in aftermarket support, both in terms of available accessories, and aftermarket upgrades. The Glock and S&W being what they are, have a huge secondary industry of upgrade parts, Walther is just not there yet. Even so, the CCP is the only option in that category with a viable manual safety, and to me is more comfortable to shoot than either the Shield or Glock. To each his own I suppose, but if they were all priced about the same and not subject to factory rebates, I would probably go with the Walther CCP for the improved ergonomics.