What is the Caliber of that Ray Gun, Anyway? The .380 ACP – A Viable Defensive Choice?

by Daryl Dempsey
in Articles, Self-Defense
14 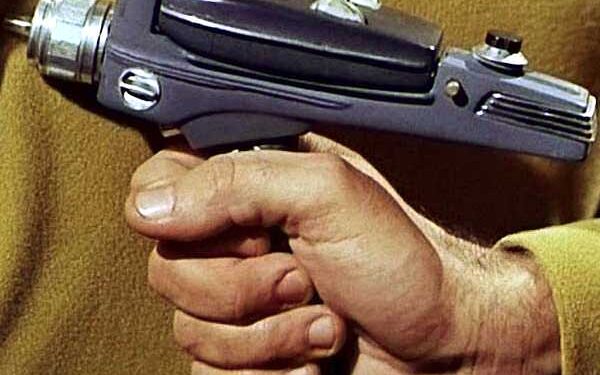 What is the Caliber of that Ray Gun, Anyway? The .380 ACP – A Viable Defensive Choice?

I had originally intended to submit this screenplay to DreamWorks as a lead-in to a much larger, blockbuster motion picture but, much to my dismay, DreamWorks rejected it.

With actors like Tom Hanks, Al Pacino, and Antonio Bandaras, how could I go wrong? Tom would not return my calls, Al was busy, and Antonio well, being Antonio, sent me an autographed picture of himself.

With a sub-title of “The .380 – A Viable Defensive Choice” who is not to say that the feature film would not be controversial?

Alas, I will share with you a couple of memorable scenes that never will be formatted to fit your television screen and that will never run in the time allotted.

INT: Artificial daylight at a qualification range aboard a spaceship in a galaxy far, far, away.

In the distance, footsteps are heard from a seemingly long hallway. A hissing sound indicates a passageway door opening and then closing. The footsteps grow louder and ACTOR #1 enters. He glances downrange, turns, faces the camera and removes an exotic-looking weapon from its holster, which he holds in his right hand at the “Port Arms” position.

ACTOR #1
It is qualification day here at Range Galactica!

I have five targets to hit in less than one second.

This seemingly impossible task lay simple by the device I hold in my hand.

ACTOR #1
I have adjusted the depth and width of the output and will aim at the center target,
press the trigger and destroy each target in a single sweep.

You see, in my hand is my Personal Protection Phaser, the XLTULCPPP, which can
merely stun a target or completely disintegrate it, and I can adjust
the beam to strike multiple targets at once.

ACTOR #1 turns toward the targets and takes aim at center target.

The camera moves over actor’s right shoulder to show the weapon and all targets. ACTOR #1 presses the trigger and targets disappear in what appears to be a haze around each target. Buzzing and crackling sounds abound. For effect, the camera pauses after the shooting happens, the smoke leisurely dissipates, and the sounds fade down.

The camera pulls back to medium shot of the actor holding the weapon in his right hand as he turns it at various angles. The actor talks while observing the weapon.

ACTOR #1
I am so glad the days of calibers wars are past-history.
They were follies at best and we no longer debate what caliber was better.

Many contentiously debated if the .380 round is a viable defensive caliber
with some experts citing it to be the minimal round to carry for defense against
humans and other would-be predators like these mock-ups of aliens commonly found in space.

ACTOR #1
Some even claimed that the .380 ACP might actually have had an advantage over the 9mm round. Especially, if it was the only caliber available when the gunfight started and you left the “Magic” 9mm, the .40 caliber, or the ever-so-then-popular .45 ACP handgun at home.

The actor turns slightly toward the target area.

ACTOR#1
Some said, “It was better than nothing!”

Actor pulls the weapon from its holster, holds it at port arms, and looks at it.

ACTOR#1
As for me, nothing says it better than the Model XLTULCPPP Personal Protection Phaser!
Ah, but I do miss those well-engaged follies at times, though!

Actor winks at camera, holsters the weapon, turns to face the destroyed targets, turns face slightly upward and to the right, and stares off into what is seemingly space.

DISSOLVE: To an earlier “modern day” caliber discussion, that is taking place.

The camera pans from an overall view of the restaurant and settles in on three friends sitting in a booth. JOE is an advocate of the .380 pistol and the ammunition for it. HANK, a dedicated Glock person, is an advocate of the 9mm pistol while TED, who is an older man, prefers the .45 ACP pistol. All are wearing blue jeans and other casual clothes. A few pitchers of ice tea are on the table and restaurant sounds jingle in the background. The men have just finished lunch after a morning at the range.

The conversation picks up with JOE.

HANK
However, the experts say that you would want a handgun cartridge that has
a Hatcher value of over 50 for the most effective stopping power.

Values over 55 have diminishing returns in that you do not gain any significant
increase in stopping power for the extra recoil and control you must cope with.

Handgun cartridges that do not make a value of at least 50, should not considered
for self-defense. If the rating of your handgun cartridge is under 30,
it only has about a 30% chance of producing a one shot stop.

TED
That being said, the difference between .45 acp and .44 magnum round is wider still,
although I don’t know many who want to carry a .44 magnum revolver around all day?

JOE
The ballistics wars go on and they will continue to go on as long as we have firearms and projectiles to fire out of those firearms that can provide maximum penetration, maximum energy dump, and maximum expansion and which result in the threat being stopped.

Lest we not forget that John Browning developed the .380 and its intended purpose was to provide a round for early blowback pistols that lacked a barrel locking mechanism.

The .380 ACP round is considered suitable for self-defense situations, and as a result, it has been a popular choice for concealed carry pistols.

The combination of decent penetration in close range defense situations with
light recoil has made it a viable round for those who wish to carry, or must carry, a small, lightweight handgun that can still provide adequate defense. (Source: http://en.wikipedia.org/wiki/.380_ACP)

With the current trend of downsizing 9mm pistols,
and the capability of sticking little 9mm pistols in little pockets,
the advantage of the 9mm over the .380 is taking hold and relegating
the .380 to the ranks of the .25 auto seems possible.

However, with the downsizing of the 9mm pistol one problem is evident.

Since the 9mm cartridge is much more powerful than the .380,
recoil in these small 9mm pistols is greater.

The amount of recoil with the 9mm was the reason why some folks
went with the .380 in the first place; it simply had less recoil and
people were willing to give up a little in the “stopping” department in order
to disperse more controlled shots at the BG’s body to prevent them
from doing what they intended on doing.

For the sake of comparison, the CC/Speer 88-grain JHP (.355″ diameter) exits
the barrel at around 1000 fps, has .36″ expansion and penetration of about 17″.
It is almost identical to the Federal FMJ ballistics.

According to these statistics, the .380 round could hold
its own with the .38 special (standard).

There were a few calibers that attempted to bridge the gap between the 9mm
and .45 acp; the .40 caliber (10mm) now being the accepted round
that did that with 155 gr (10.0 g) Guardian Gold JHP bullets traveling around 1,205 fps.

The not-widely-yet-accepted .357 SIG round is yet another
attempt to provide a self-defense cartridge close in performance
to a 125-grain .357 Magnum, but from a semi-automatic
pistol with greater ammunition capacity.

TED
Well, the .45 GAP (Glock Automatic Pistol) designed by Ernest Durham,
an engineer with CCI/Speer, at the request of firearms manufacturer Glock,
provided a cartridge that would equal the power of the .45 ACP but
was shorter to fit in a more compact handgun.
The round features a stronger case head to reduce the possibility of case
neck blowouts due to its higher case pressure characteristics.

JOE
(Leans forward over his iced tea, as if to make a point)
Would I take 8 or 10 rounds of .45 acp over the .380?
I should not even have to consider that question. However, some
would have to consider the question, as they may not be able to
shoot the .45 acp as effectively as they can with the .380 or 9mm,
let alone the .40 caliber. Even a good .38 special revolver may
be out of the question. In fact, some may not be able to handle the
recoil of cartridges over .380 caliber or possibly cannot
hold a weapon of larger caliber.

I believe that the right .380 pistol mated with most excellent ammunition,
placed in the hands of a person that is skilled in manipulating the shooting platform,
and that understands the ballistic limitations that the round exhibits,
the .380 is still a contender as a round for self-defense.
The .380 is in a class of its own and comparing it to the 9mm,
in the power department, is not realistic.

For those who want to carry or need to carry out of necessity,
a small and lightweight handgun that can still provide adequate defense,
the .380 may be an excellent choice. I enjoyed shooting my SIG P230
as much as I do the Bersa 380s that I have now, as they are light,
accurate, dependable, and reliable handguns. Given the caliber,
I cannot ask for much more than that.

I still say that the .380 ACP is capable of 100% stopping power given
the fact that a PPP (personal Protection Phaser) has not yet been developed.

CUT: MEDIUM SHOT OF ALL THREE MEN TAKING A DRINK OF ICED TEA.

At this point, each of the three men leans back into their seat; lost in their own thoughts. TED motions to the server for a refill, while HANK stares into his glass.

Joe takes a sip of his iced tea and slowly looks up and right; gazing at some distance far away

DISSOLVE: REPLACE JOE’S FACE BY THAT OF ACTOR #1 (WHO IS, INCIDENTIALLY, AN OLDER MORPING OF A YOUNGER JOE (ca va sans dire, from “Saving Private Ryan”)) WHO IS ALSO LOOKING IN THE SAME DIRECTION

ACTOR #1 winks at the camera, turns his back, and leisurely walks away.

PULL BACK: CAMERA PULLS BACK THROUGH A MAZE OF CG DEPICTING CORRIDORS IN A LARGE SPACE SHIP, EXITS THE SHIP, AND CONTINUES PULLING BACK UNTIL SHIP FADES INTO THE LARGE, DARK REGIONS OF SPACE.

Daryl Dempsey is an Oath keeper, veteran, ex-law enforcement officer and trainer, and an independent conservative libertarian that believes in the Constitution of the United States. He has over forty years of experience as a Technical Writer and Training Program Developer and has as many years devoted to the keeping and bearing of arms.