by Luke McCoy
in Articles, News
1 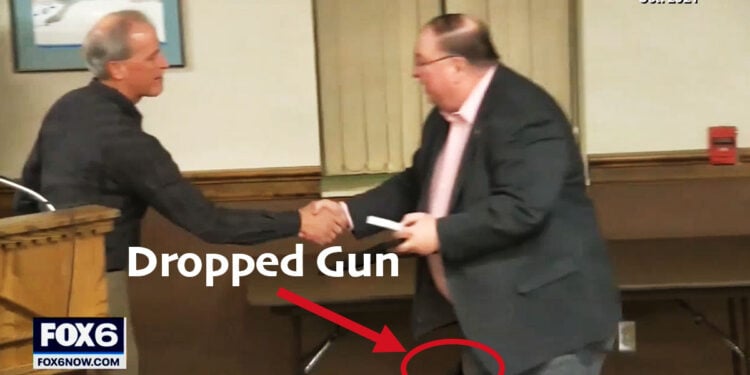 The two main takeaways from this story are that you have to know the concealed carry laws in your state if you will carry a gun and have a proper holster so your “gun doesn’t fall out” randomly.

The Mayor of Hartford, WI, could be brought up on criminal charges after dropping his concealed carry gun before a board meeting earlier this month. And surprisingly, this isn’t the first time this has happened.

The Mayor was talking to someone before the meeting started, and his gun just fell out onto the floor. The person he was talking to picked the gun up, thinking it was a cellphone but realized it was a holstered gun, and he gave it back to the Mayor.

The Mayor’s excuse was that he thought he was exempt from the law since he was a Mayor. Well, it doesn’t. Also, during the investigation, it was found that the Mayor’s concealed carry permit was expired.

What’s more, this isn’t the first time this has happened. There’s a video of the Mayor going to shake someone’s hand when the gun just falls out of what looks to be his waistband. I mean, this is almost comical. The Mayor of a city is walking around with guns falling out of his waistband and doesn’t even have a concealed carry permit because it was expired.

Know the concealed carry laws in your state. It is YOUR responsibility to know where and where you cannot carry. And if you have a habit of dropping guns, it is time to get a new holster. I really wish I knew what kind of holster he was using, but I have my suspicions. Your holster should not be able to just call out of your waistband. It should attach to your belt with clips or loops (or some kind of chassis system like the Phlster Enigma). There should be no way for it to fall out. Unless you are using one of those holsters that replies on belt pressure for retention. And if you use one of those, you should throw it away and get a proper holster today.

Of course, the real lesson here is; unless you’re the mayor or some big city official, you would be arrested and prosecuted for having the same thing happen to you. You should carry only where it is legal to do so and as it is legal to do so. And what makes this embarrassing (not that he has enough of a conscience to be embarrassed) is it wasn’t but just a couple years ago the same basic thing happened. I recall it being covered. You think he would have learned from that time.