The 10-Round Assault Course 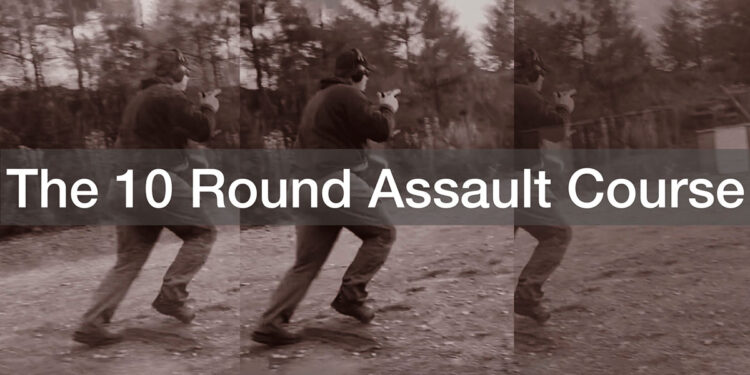 The 10-Round Assault Course is a nice break away from the usual static scored drills and combines movement with a tight accuracy standard. This drill was designed by Ethan Johns and first appeared in SWAT Magazine (which used to be the best gun rag around) in 2014. It has been floating around the internet since then, popping up here and there.

What You Need For The 10-Round Assault Course

As the name implies, it requires ten rounds and consists of a single, continuous string of fire with shots fired from 25 yards, 15 yards, 7 yards, and on the move forward of the 7-yard line. The target used is a B-8 repair center. For scoring, both time and points matter. As originally designed, the goal is to be under 20 seconds and over 80 points. Hits on the B-8 repair center score actual point value, so a hit in the 10-ring is worth 10 points, the 9-ring 9 points, etc. Hits not in the rings get 0 points. Since it is a 10-round course, 100 points is the max that could be scored. A shot timer is the easiest way to track time, but a buddy with a stopwatch is probably close enough if you don’t have a timer.

The 10-Round Assault Course Course of Fire

What 10-Round Assault Course Gives You

If you have a range that gives you the freedom to do it, it is a good mash-up of a movement drill with a tightly scored accuracy standard. It requires quick, explosive movement with good technique for moving out of and into shooting positions. Good accuracy at respectable distances, 40% of the shots are at 15 yards or further. Some quick cadence shooting at the 7-yard line and some shooting on the move at a smaller target from 7 yards forward. On top of all this, it requires good gun handling and being able to maintain safety while moving up the range.

Variations On The 10-Round Assault Course

While the original design of the drill is good, there are also some variations you can throw at it to change it up a bit. Scoring can be adjusted in a couple of different ways to end up with a single metric instead of two. The most obvious is hit factor scoring, or points divided by time. This gives a number of points per second. The higher the number, the better the run.

Another variation is to use what is typically called points plus penalties scoring or IDPA scoring. For each point under 100, a time penalty can be assessed and added to the raw time of the drill. For example, it takes me 16 seconds to shoot the drill, and I score 86 points. I am 14 points short of 100, and each point down can add 1/2 second (or whatever value you want to assign to it) to my total time. So for a 16-second run, plus 7 seconds of penalty time, the total time would be 23 seconds.

This drill is a good break from the normal fare. If your range can support it, it is well worth the time. Printable B-8 repair centers are available for free online. While a timer is nice to have, the drill can be done without. Making this a logistically easy drill to pull off. If you give it a try, drop your score in the comments.