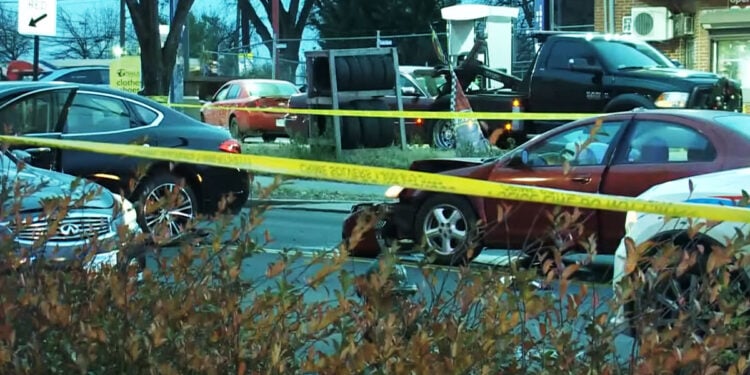 After a car accident in Southeast Washington, DC, on Wednesday, a driver shot and killed a man in an argument. Even though he told detectives he was acting in self-defense, they charged him with a gun offense. Notice there is no mention of any other charges except carrying a gun without a license.

Anthony Williams, 44, and a woman were in a car accident Wednesday afternoon. The situation got worse when the woman called her boyfriend for help.

33-year-old Brooklyn Lynn went to the accident scene after his girlfriend, who was driving one of the cars, called him. According to witness testimonies, Lynn confronted Williams numerous times. People at the scene told officers several people tried to stop Lynn, but he kept going after Williams.

Williams said he went to his vehicle to wait for the police to arrive, but Lynn pulled him out and hit him on the head again. According to Williams’ statement, he pulled a 9mm Taurus handgun out of a cargo pants pocket and fired one shot. The gun was not registered in DC, according to police, and Williams told them he was carrying it for protection. Williams said Lynn’s size scared him, and he was unsure if he was armed.

Although the alleged attacker was not armed, it is possible Williams’s attorney could claim there was a disparity of force. The Criminal Jury Instructions for DC states:

If Williams retreated to his car and was pulled from it by Lynn, then possibly the use of deadly force was justified. This will be one for the attorneys to argue.

They released Williams on supervisory detention with an ankle monitor. We will have to wait to see if prosecutors add any additional charges, but it seems like they came down on him pretty hard if this is how it played out.

The 10-Round Assault Course

Don’t Let Your Gun Get Traded For Drugs

Don't Let Your Gun Get Traded For Drugs