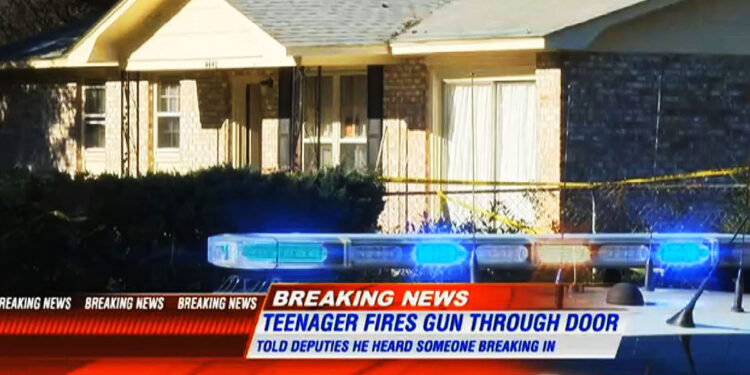 This story came across my newsfeed this morning, but after doing a little digging, I found that this incident actually took place in 2015.

A 13-year-old South Carolina teenager was home alone on a Tuesday afternoon when he heard someone trying to break in through the house’s back door. He grabbed his monther’s Glock 9mm handgun and went to the back door.

The two suspects fled and went to a local hospital, where the wounded suspect died from his wounds.

Thankfully, the teenager made it out of the situation unharmed, but he still had to deal with the fact that he had shot and killed someone. His father stated that his son is having a tough time dealing with it.

So a few things I’d like to discuss here.

First off, we generally don’t recommend blindly shooting through a door. You always want to identify your target, and you can’t do so by shooting through a door. It also might be hard to state that you were in imminent danger when the threat is on the other side of a locked door. I’m not saying what the teenager did was wrong. He wasn’t charged, so the District Attorney thought so as well. I have to give props to the victim for being brave enough to arm and defend himself. It would also be safe to say that he was taught how to use a firearm.

Secondly, I’d like to touch on leaving firearms around where children have access to them. No reports state where the handgun was. It could have very well been in a safe that the 13-year-old had access to. Luckily, he had access to the gun to defend himself. But this should be a reminder to us all that our firearms should be secured properly. I have a 6-year-old son, so my firearms are secured at all times. My daily carry pistol is either on me or in a quick-access safe. My home defense gun is also in a quick-access safe. Everything else is in my bigger gun safe. At no time is my son able to access any firearm, loaded or not. We report on too many incidents where children get a hold of guns left in the house with tragic consequences. Just last month, I reported on a boy that shot his younger brother after finding a loaded AR-15 next to a bed.

Lastly, I want to bring up the fact that while you might come out unharmed in a self-defense incident, if you do shoot someone, you will have to mentally deal with that after the fact. In this incident, we are talking about a 13-year-old boy dealing with the fact that he shot someone. But you, as an adult, might go through the same post-traumatic stress. This might be something to think about when shopping around for your concealed carry insurance. Some companies offer post-incident psychological support, and some don’t, so do your research if that is something important to you.