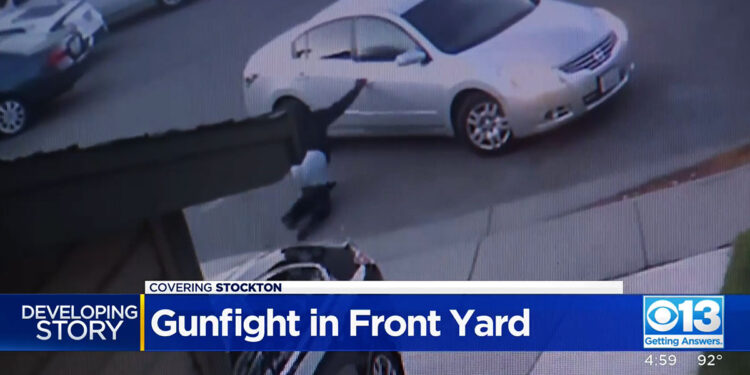 One man is thankful for his son being in the right place at the right time. He said he and his family would probably be dead if he hadn’t.

This past Tuesday, a California man was driving past his father’s house around 5:45 AM. He wasn’t expecting to see six men preparing to enter his father’s home. His father is a jeweler and has had a history of dealing with robberies which I will get to later.

The son called his father and told him guys were waiting outside for him and not to come out. Then he armed himself and confronted the suspects. A gunfight ensued, and three of the six suspects were shot and fled the scene. Surveillance footage caught one of the suspects helping a wounded suspect flee and another crawling on his hands and knees to get into the getaway car.

And even though it was six verses one, the son made it out unharmed.

The three wounded suspects were later caught at a local hospital while getting treated for non-life-threatening injuries.

In an interview with local media, the father mentioned that he had been robbed ten times with guns. And ten years ago, his father, who was also a jeweler, was shot during an armed robbery. His son tried to keep his dad alive, but he passed away before paramedics could get there.

Buffalo Shooting Witness: “More people should be armed. It’s not the gun, it’s the person with the gun.”

I think I recall seeing something on TV about the father. Can’t remember the TV show, but he was robbed many times and was armed.