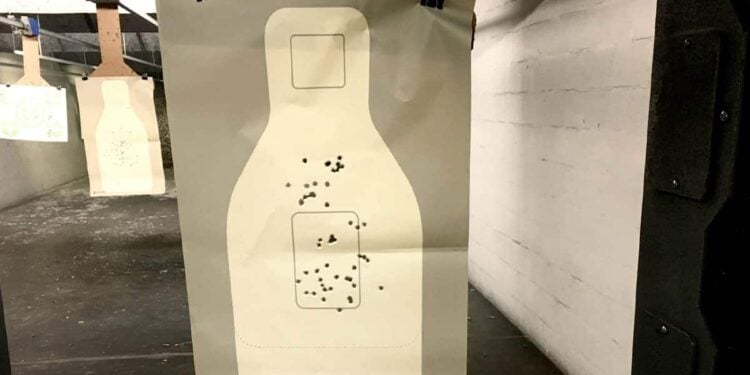 Even though the distribution is a bit different, many of the strings of fire in the new qualification are in fact very similar to the 2013 qualification. For example, the string of fire that includes an emergency reload is still the same number of rounds fired and the same time limit. The start position is from the ready, as opposed to starting from the holster in the older qualification though, making it a bit easier. We see more use of the ready position in general. In total there are ten strings of fire, five of them the shooter starts from the ready position. In the 2013 qualification, every string of fire started from the holster.

Did it get harder?

The other notable change in terms of time allowed to complete the string is at the 25-yard line. The old handgun qualification called for firing two rounds standing and three rounds kneeling in 15 seconds. Broken down very basically, you have three seconds per round fired. The new qualification calls for four rounds standing and four rounds kneeling in 20 seconds. Broken down the same way, you have 2.5 seconds per round fired. Nearly a 20% reduction in time allowed per round fired.

More of the same.

Most of the remaining strings of fire are very similar to the older qualification, with only minor changes. Having shot the older qualification more than a few times, I could definitely feel where the most significant changes were based on how quickly the time limit required me to shoot and how much focus it required. I felt the most pressure on the 3-yard string of fire, and the 25-yard string of fire.

While the bump in difficulty is minor, it is still noticeable. I feel this newer iteration of the FBI qualification is an overall improvement. But it is still not what I would consider difficult. The scoring is still the same as before. Each hit on the QIT above the “belt” counts as two points. Hits below the scoring line but still on the bottle count as misses. The total possible score is 100. To pass the qualification you must get at least 80%.

Most people with a good 2-day class under their belt and regular practice should be able to meet this standard. People who train and/or practice more frequently than that should be able to shoot 100%, or very near it, on this qualification without issue. As Tom Givens is fond of saying, it is barely more than a sobriety test.

Why Talking About A Wound Cavity From A Handgun Is Pointless

6 Medical Certifications Anyone Can Get – And Why They Help

6 Medical Certifications Anyone Can Get - And Why They Help