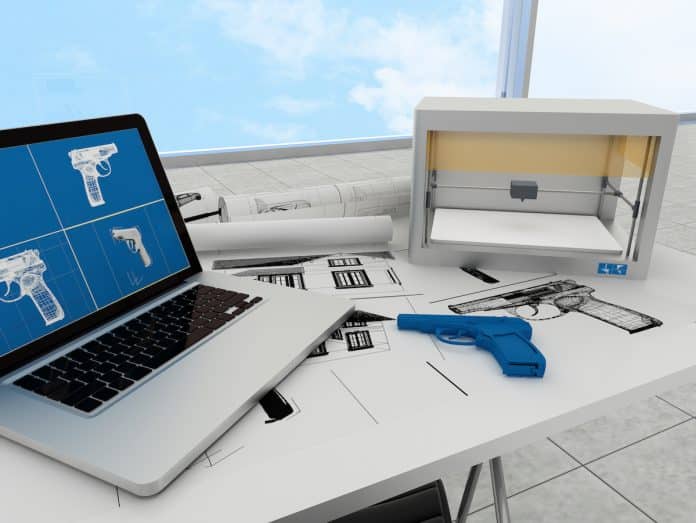 The subject of 3D printed guns is undoubtedly a contentious one in American politics today, and while it’s an issue that has been steadily brewing over the last couple of years, things really exploded in May when a District Judge based in Seattle issued a restraining order to stop plans to release 3D gun designed by Defense Distributed.

Just in case you’re wondering: yes, a 3D printed gun is indeed a gun that you can download via a 3D printer. Or more appropriately, the parts for the gun can be printed and then you can assemble those parts.

To help give you a background on the 3D printed gun debate, we’ll go over why 3D printed guns are controversial, the current Federal laws as they pertain to 3D printed guns, and then what action is currently being taken by the government to help give us an idea of what could be in store for the future.

The Controversy of 3D Printed Guns

3D printed guns have been around since 2012. Defense Distributed, led by founder Cody Wilson, announced that they would be releasing gun designs that could be produced by regular 3D printers that many people have in the home.

Some of the designs were for guns that had already been on the marketplace for some time, such as the AR-15.

However, other designs were for entirely new types of guns, such as the single shot .380 ACP Liberator pistol. The entire Liberator pistol is plastic, except for a metal firing pin that is required by Federal law to make the gun detectable by metal detectors (more on this in a bit).

Defense Distributed completed the first blueprint in 2013, which the United States Department of State immediately demanded be taken down, arguing that designs were a violation of the Arms Export Control Act.

Wilson then responded by suing the Federal Government, claiming that they were violating the company’s 1st Amendment Rights.

In 2018, the government elected to settle with Wilson following the election of Donald Trump, which means that they acknowledged Defense Distributed’s right to publish, distribute, and sell the 3D printed gun designs.

But then, as was noted above, a Federal district judge in Seattle (Robert S. Lasnik) issued a restraining order to halt the plans from being released.

To begin with, what makes 3D printed guns so controversial,?

There are a few reasons why.  For one thing, as was noted above the Liberator pistol is entirely plastic other than a metal firing pin.  This pin is easy to remove from the handgun, which means that it’s more than possible for the Liberator as well as similar 3D printed guns to go largely undetected by metal detectors.

Furthermore, 3D printed guns cannot be traced (at least not easily) because they lack serial numbers.  And since you can make them out of plastic and not metal, they are much easier to destroy than metal guns as well.

Last but not least, anyone can make 3D printed guns in their home, and therefore do not require an FBI background check. Background checks are only legally required for firearms that are sold commercially from firearms dealers.

At the same time, proponents of 3D printed guns argue that under the 2nd Amendment, American civilians have the right to build firearms on their own at home.

The Laws As They Pertain To 3D Printed Guns

For example, the Undetectable Firearms Act was signed into law in November of 1988, and requires that all firearms manufactured, possessed, and sold in the United States to have enough metal in them (at least 3.7 ounces) so that a metal detector could detect the firearm.

For reference, the Undetectable Firearms Act was renewed for five years in 1998, ten years in 2003, and ten years again in 2013.

This means that the law will sunset (or expire) in 2023, unless if it is renewed by Congress again.  Until then, all 3D printed guns will still have to contain at least six ounces of metal in them to remain legal in the United States.

This is also why the firing pin of the Liberator is the metal piece that Defense Distributed chose to have in the gun because even if you were to removed that piece and the whole rest of the gun is plastic and it will not be functional.

The only major legislation that the Federal government attempted to take on 3D printed guns was the 3D Printed Gun Safety Act.

This bill was introduced to the Senate by Democratic Senator Bill Nelson of Florida, mainly in response to the Parkland school shooting in February of this year.

Senator Nelson attempted to bring unanimous consent to the bill, which meant that it could become passed through the Senate without a formal vote, but Republican Senator Mike of Utah stopped him by verbally objecting.

There’s simply no denying that we have yet to see the end of 3D printed guns being mentioned extensively in the political world.

There’s also no denying that it’s important for civilians to treat 3D printed guns just as responsibly as regular guns to avoid any issues that opponents can use in an attempt to enact further legislation.

For the time being, however, 3D printed guns have created a lot of controversy for the reasons that I stated above, and it could very well be that the sway of public opinion will be what really decides the issue.