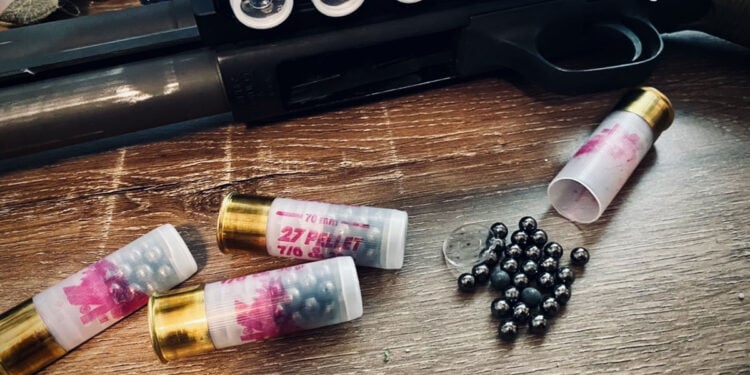 What are we looking for?

The hope in all of this handwringing is to have a load that works well enough but minimizes the risk of over-penetration with missed shots or periphery hits. We are looking for something that works well enough to reliably stop a motivated attacker but also minimizes the risk at the same time. The debate is, of course, what is actually the best solution to that problem.

The #4 buckshot proponents say that it is the happy medium (or close to it) between a load that has a high probability of being an effective stopper and a load that minimizes the downrange risk all at the same time. A #4 buckshot pellet is 0.24” in diameter and weighs around 20 grains. A 00 pellet is about a tenth of an inch larger in diameter and weighs over twice as much. A 00 pellet carries much more momentum. The hope with #4 buckshot is that it has just enough mass and velocity to reach the vital structures inside our attacker’s body, but nothing extra. The bare minimum and nothing more, hopefully. This is also why many people say #4 buck isn’t enough.

What is the real problem, though?

Potential issues with penetration aside, the real problem with #4 buckshot loads is that they generally do not pattern well enough. When using guns off the range, it is the user’s responsibility to know the final resting place of every projectile that leaves the muzzle of the gun. That means every pellet needs to be accounted for in the aiming solution.

The best way to mitigate downrange risk is to have a backstop. When we aren’t on the range, our backstop is the body of the attacker. If our bad guy catches all of the lead, the downrange risk is effectively mitigated. This is why patterns matter and why most notable shotgun instructors are proponents of relatively tight patterns. A tighter pattern makes accountability easier.

As a general rule, #4 buckshot loads don’t give us pattern sizes that can guarantee pellet accountability beyond 5 or 7 yards in the typical defensive shotgun with a cylinder bore. I usually draw that line at about a 6” pattern, accounting for the potential need for off-angle or obstructed shots. Many people would probably think 5-7 yards is plenty of range for home defense. That is a dangerous assumption, though and presupposes that we can accurately forecast what our own home defense firearm use will actually look like. I am an imaginative fellow, but even my crystal ball is a little hazy on most days.

How far is it really?

A better solution for determining engagement distances inside the home is to determine the longest line of sight in our own homes. Since there is a defined box that most everything needs to fit in, instead of focusing on what might be likely, focus on what might be possible. This way, we can ensure the capabilities of our shotgun, and the chosen load are well suited, regardless of how specific circumstances may manifest. In my rather small home, well under the median home size in the United States, that number is 13 yards. Well beyond the range I would be comfortable with using most 4-buck loads at. I would wager that most homes probably have a line of sight that extends beyond 10 yards.

Who is at fault?

The number of pellets and manufacturers’ apparent hesitation to apply good technology to these loads hurts their performance. It isn’t really the fault of the shot size but unimaginative manufacturers. A low recoil #4 buckshot load with plated and buffered shot in a wad design that might give it a little extra help would be a pretty easy load to market, in my mind. In fact, it has existed in the past but was taken off the market. I guess the big wigs at the local shotshell plant think differently than I do.

There is only one #4 buckshot load that is worth any consideration, and that is Hornady’s 2-3/4 load in their Varmint product line. While Hornady’s execution of a #4 buck load is the best currently available, there are still some beneficial design features that they left on the table. Until someone optimizes the #4 buckshot load, it will be an unacceptably subpar solution for the defensive application of the shotgun. Stick with the high performers, and all the high performers right now are 00.