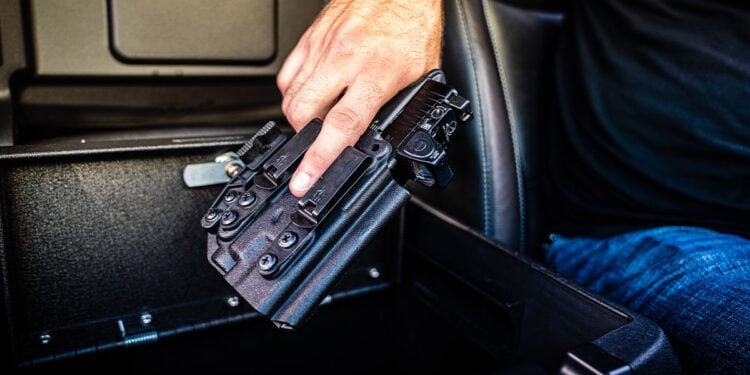 Most negligent discharges of a firearm happen during careless administrative handling. Often, a gun will be fired unintentionally while someone hands it to a friend to look at or while someone is cleaning a gun that they think is unloaded. However, every year there are multiple instances in which an individual will fire a round while carrying a gun, even when the gun is supposedly holstered. Reports of guns going off (guns don’t just go off, they get fired) in public restrooms, movie theaters, restaurants, etc. involve unsafe carry practices or unsafe manipulation of a gun that should not be touched. Here are some points to consider:

Any gun that is carried on body should be in a safe holster. The primary characteristics of a safe holster are a completely covered trigger guard and adequate retention. With few exceptions, guns should be carried in secure, quality holsters. Even pocket guns, which are designed with long and heavy trigger pulls, should be carried only in a pocket holster when in the pocket. No other objects should accompany the gun/holster combination in the pocket either. There have been numerous instances in which a concealed carrier fired a round through their pocket and into the floor, if not into their foot because they accidentally actuated the trigger of a gun carried without a holster in the pocket. Unacceptable.

Any holster worn on the waistline should safely retain the gun so that there is no possibility of it falling out of the holster, even during vigorous activity. This is an aspect of holster design that many fail to consider; there is a high probability of needing to run fast or getting into a hand-to-hand fight during a defensive gun use. The gun does you no good if it goes skidding across the parking lot when the fight starts. Test your holster with an unloaded gun; can it stand up to vigorous activity? Another consideration for holsters is their resistance to coming off the belt during robust activity. Are the loops or clips well made? Will they break if the holster is tugged on? Will the holster shell itself break during a fight? All things to consider.

Many negligent discharges happen when the carrier fidgets around with the gun for no good reason. With a well-designed, safe holster, there should be little reason to touch the gun during carrying. If you need to constantly re-adjust the gun throughout the day, change your holster. There was a video that circulated the internet some time ago of a guy who shot himself in an elevator because, for some reason, he felt compelled to take his gun out of the holster and adjust things. There is no reason to re-adjust your carry setup during the day if you are carrying in a good holster with a good belt.

Another way to mitigate the danger of negligent discharge is to avoid administratively handling the gun while in public. For example, don’t draw your gun in the car and press-check it to make sure it is loaded. Be sure that your gun is loaded and ready before leaving the home. Sometimes you might need to disarm when in public, and this might be unavoidable, but the handling required can be minimized. For example, maybe you have no choice but to take your gun off and leave it in the car in order to enter a prohibited environment. This author is not fond of the practice that is employed by many concealed carriers, which is to unholster the gun and put it in a glove compartment or center console. This practice introduces an unsecured gun that you are holding in a cramped place, in an awkward position, in an environment with distractions. Such administrative handling in a vehicle or other places outside of the home introduces significant danger and a heightened risk of a negligent discharge.

If you must disarm in the vehicle, consider using a holster with clips or loops that allow you to remove the entire holster from the belt so that you are not handling the unholstered gun while in the vehicle. If the gun never leaves the holster, then you run a significantly lower risk of a negligent discharge. Also, be sure to have a secure location in your vehicle, as guns often get stolen from cars. A hand safe of some kind that can be locked down to the vehicle in some way and that is not visible through the windows is more resistant to theft than only leaving the gun in a glove compartment. While not perfect and still prone to theft, at least the smash-and-grab thief is likely not going to have the time to break into the safe.

The Only Reason for the Gun to Leave the Holster

The only reason the gun should ever leave the holster when out of the home, and not during administrative handling or practicing, is if the gun is needed to deal with a deadly threat. That is it, no other exceptions. The gun should never be taken out of the holster at a barbecue to show to your friends. If you want to show a specific gun to friends, bring it unloaded and secured in a carry case. The gun in your holster, on your person, is there at the ready for only one reason. Many negligent discharges have occurred during the process of a friend showing another friend his carry gun. Not acceptable.

Every time a gun is in your hand, you are handling a deadly implement. Those of us that carry guns and train with them all the time sometimes forget this overriding principle. We cannot get lackadaisical about firearm safety. By implementing these life rules, you will ensure that you don’t have a negligent discharge while carrying a gun in public.