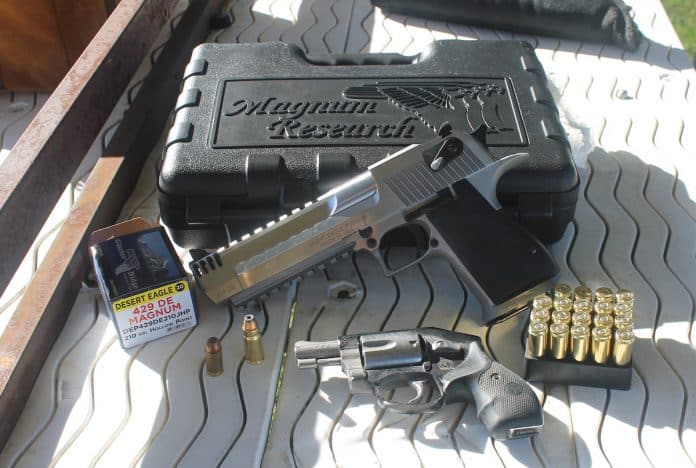 Some guns are simply iconic. The Smith & Wesson Model 29, the AR 15, the AK47, the Mossberg 500 series and many others. When it comes to hand cannons, the Desert Eagle is one of the greats.

Magnum Research released a new Desert Eagle in .429. This is the same bullet size used in the .44 family. The 429 Desert Eagle is a new cartridge, bottle-necking the more famous .50 Action Express down to the .429. The new round has a 30-degree shoulder.

Magnum Research tried this before in 1998 with the .440 Cor-Bon, a .50 AE round necked down to the .429. The Cor-Bon actually packs a slightly bigger punch than the new 429 Desert Eagle. The .440 Cor-Bon never took off commercially.

After spending time at the range with the 429 Desert Eagle, it appears Magnum Research has another boutique cartridge and a gun that will not take off unless the company improves the gun.

The Problems with the 429 Desert Eagle

The test shooting crew included two law enforcement firearms instructors. Joe Saxton, a handgun expert was one of the two. The shooting team was extremely excited about getting to shoot a hand cannon. That excitement quickly turned to disappointment, then annoyance. The gun was simply not reliable.

Failure to feed (FTF) was the norm. Every person who put more than two rounds in the mag had some sort of FTF. Several times the gun cycled properly, but the slide and bolt did not slide forward enough to fully engage the locking lugs. Fortunately, Magnum Research did get the trigger assembly right and the gun would not fire.

Sometimes the gun would go into battery by pulling the slide back a fraction of an inch and letting it slam forward. Sometimes the round had to be ejected before it would engage the lugs, empty chamber or loaded.

Once, the gun actually locked open despite having another round in the magazine. The magazine has a 1/16th-inch play when seated in the grip, which may account for some of the FTF issues. The mag spring is seriously strong. Two hands are needed to load the capacity seven rounds.

The mag is also a straight .50 AE magazine. That sort of makes sense, since the gun itself, is a .50 AE with a .429 barrel. However, the mag is another problem. The DE .429 has a sharp shoulder. The .50 AE magazine is designed for a straight wall cartridge. Loading the .429s with the bottleneck means the rim of the loading round will get hung on the shoulder of the already-seated round unless careful attention is given during loading.

Rounds do slide out of the mag easily enough when unloading by hand.

Several times a spent brass got hung between the bolt and chamber. Spent brass generally flew backward. Several shooters were hit in the face by the spent brass. Brass did not go far.

The ambidextrous safety placed just forward of the hammer is monster. It might loosen with time, but at the range, it took one hand on the gun and the other hand working both sides of the safety at the same time to make it move. Going on safety was easier than going into fire mode.

The slide is smooth and does require some force to pull, but that has to be expected on an autoloader of this size.

The integral muzzle brake does throw a significant concussion wave backward. The first time it is disconcerting, but after a few shots, it is nothing to be concerned with.

Accuracy was on the low side of fair.

The Good Things with the 429 Desert Eagle

It looks cool. Opening the case at the range drew plenty of “Ooohs” from the test shooters. The chrome finish and the sheer size are just impressive from any angle.

Recoil is light. An average shooter, after getting used to the gun, can easily shoot it with one hand. The gun’s weight, nearly five pounds with loaded, and the ports on the end of the barrel tame recoil.

You can swap barrels on the frame between the .50 AE and various other .429 barrels. The bolt is exactly the same for both. Magnum Research offers several barrel options for the .429.

Two pic rails, one of the bottom and one on the top mean adding things is easy. Since the top pic rail is integral to the barrel, once mounted and zeroed, barrels with optics can be changed without having to go through the re-zeroing process each time.