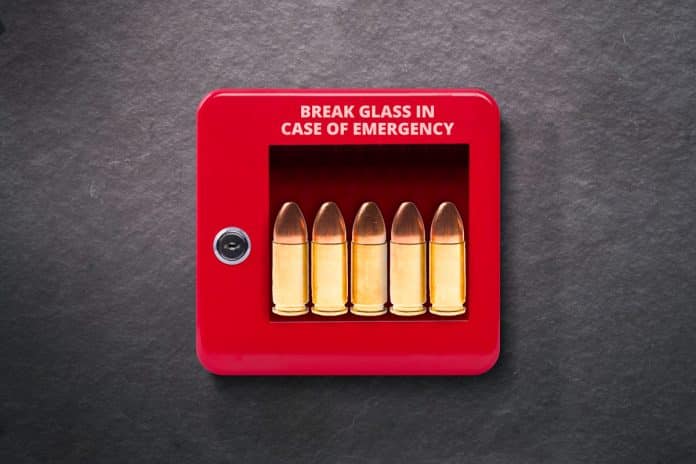 Ammo is hard to come by these days, so high round count shooting drills, plinking, and pointless mag dumps are really not a good idea anymore.

Granted, mag dumps are never a good idea anyway because it basically signals to those around you to paddle faster as they’re about to start hearing banjos.

That’s right, I said it, and I don’t even care if you’re mad Bubba.

So, how are you supposed to get in your shooting practice when you have less to work with? Shooting drills that test fundamentals but have a low round count.

To get the most from shooting practice, use a timer, and keep a log of your scores, raw times, and time after penalties using typical scoring standards for shooting exercises. This will help you track progress.

What are some low round count drills that give you a lot of bang for the buck, so to speak? Here are five excellent examples. The following shooting drills help you evaluate your skill level or work on your fundamentals to get that skill level up and don’t require a lot of ammo to do it.

But First: A Word About Dry Fire

But don’t go neglecting dry fire practice. While live fire is absolutely critical to maintaining or enhancing shooting skills, so is dry firing.

In dry fire practice, you work on your grip, sight picture and trigger press, and your draw and presentation. In other words, everything up to the explosion when you press the trigger behind a live round.

Don’t neglect it, and use a timer for it as well. How can you get close to drawing fast if you don’t time yourself?

But without further ado, except for the ado when I typed “further ado,” here are those 5 low round count shooting drills.

Ken Hackathorn’s Wizard Drill requires only five rounds to shoot, so you could run it 10 times on one box of 50. Granted, that would also be a bit outside its intended purpose.

The Wizard Drill is actually a course of fire, akin to a shooting standards test, but unlike many of actual shooting qualification courses of fire only requires five (5) total shots. It’s run from concealment, with the gun holstered or the hand on the gun if carrying in your pocket.

He uses an IDPA silhouette, but you could use an IPSC silhouette, a QIT target, or paste up two NRA B8 targets and only count hits in the black for the headshots.

The courses of fire are a single headshot at 3 yards with the strong hand only, 5 yards and 7 yards with both hands, and then a controlled pair to the body at 10 yards. All strings have a par time of 2.5 seconds, but scoring is pass/fail. Miss a headshot or go over time and you fail.

Round count is impossibly low and it’s a serious test of fundamentals. What more could you want?

The Test, another invention of Ken Hackathorn and also popularized by Larry Vickers, is rather simple. It’s 10 shots at an NRA B8 25 Yard Timed/Rapid fire target at 10 yards in 10 seconds. You can find free printable versions or buy a bunch in most sporting goods/gun stores.

It’s pretty simple and relatively low round-count…but it’s deceptively hard in that you have to go fast enough to get under the par time but shoot accurately enough to keep all your shots in the black, which is a 5-½” circle.

The Vickers scoring method is to subtract 1 second for every hit on paper but out of the black, and 3 seconds for any hit off the black. As long as your time is under 10 seconds after penalties, you pass. Hackathorn uses the paper score, with a passing score being 90 points.

Want to make it harder? Shoot it from concealment.

Baer Solutions is a firearms training outfit run by Drew Estell, formerly of US Army Special Forces. The Baer Solutions Standards drill, much like the Wizard drill, is a cold drill with a short-ish course of fire that works fundamentals.

You’ll need to print a target for it, which is found – for free – at Baer Solutions. It’s two 6″x3.5″ rectangles with a 2-inch circle in the middle.

Shooting is done at 3, 5, or 7 meters and using a timer. You’ll need three magazines; one with 10 rounds loaded in the gun, one magazine with 3 rounds, and a full magazine in reserve.

The point is to make all of your shots, but record the time you had to take to make them. 7 seconds or less is a good time, but less than 5 seconds is outstanding.

The Vice Presidente is a variant of the El Presidente shooting drill, but adds an insidious twist. Instead of a second round of controlled pairs to the target, it’s headshots.

Set up is the same; three silhouettes (IDPA, IPSC, what have you) at 10 yards (or meters) each spaced 3 yards (or meters) apart and your pistol holstered and loaded with six rounds and a full magazine in reserve.

On the beep from a timer, put a controlled pair into each target from weak side to dominant side. At slide lock, reload and make three headshots. The total round count is 9 shots, and virtually every fundamental shooting skill is required to shoot it clean.

Par time is 10 seconds for semi-autos and 12 seconds with revolvers after penalties. If you can shoot it clean under 7 seconds, that’s seriously impressive.

The Dot Torture drill is less of a specific exercise, and more an entire workout. The good news is it’s only a single 50-round box. The bad news is that it’s a real bear.

Don’t worry about time. The goal in Dot Torture is to shoot the entire course clean, so don’t introduce a timer until you can do that.

The targets are 10 numbered 2-inch circles, with 7 courses of fire. You want to start close, at 2 or 3 yards. Once you can shoot it clean, then go ahead and move back.

You’ll need a dot torture target, which you can get for free at Pistol-Training.com.