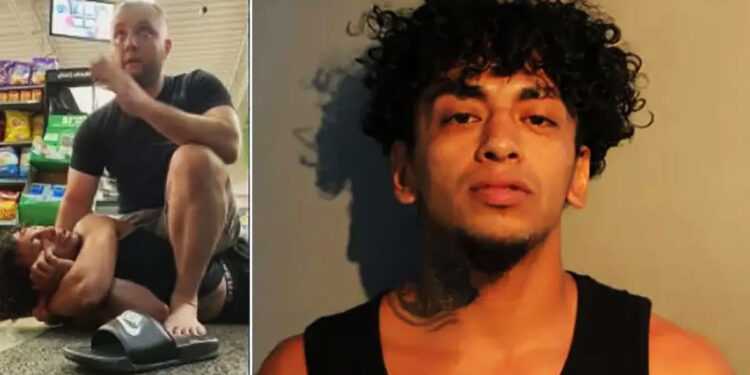 A Chicago man who stole from a 7-11, harassed customers, and then took a swing at the clerk got a gift from a customer that just happened to be a 3rd-Degree Jiu-Jitsu Black Belt. And by gift, I mean being gift wrapped, which is a jiu-jitsu position that is not comfortable at all. Trust me, I know!

Idriz Redzovic, a 3rd-Degree Jiu-Jitsu Black Belt and owner of Supreme Jiu-Jitsu Academy in Chicago, Il, was at a 7-11 getting Slurpees for his kids. Then he was involved in a somewhat crazy confrontation in the parking lot.

Here’s a little back story to the incident, I was getting Slurpees for my kids, and a lady came in complaining about the individual In this video. I looked outside, and her friend was driving around wreckless, trying to hit him with the car, and he was slamming his hand on her car, teasing her, and saying crazy stuff. I was not sure if they knew each other because she seemed to be on something herself as well. I told her to jump in the car and just leave. She  snapped at me for saying that to her. Then she took some windshield fluid  and slammed it on my own car in front, trying to open it. I got her off.

Then I called the cops on both the girls and the guy. I stood back, minding my business. Then the guy runs up on me, talking crap, and then said: are you Russian and tried flexing on me, trying to pretend like he was going to swing at me, and I took a step back and didn’t engage. Then he walked into 711, messing with the employee as I was standing outside just watching and waiting for the cops, which I called like a few mins back.

Then I saw him swing at the 711 Employee. That’s when I jumped in to control him till the cops came.

Idriz then took the man down and held him in what is called a gift wrap until the police arrived at least 14 minutes later, according to the video he took. After he took him down, he went live on his Facebook page to make sure nothing went on, and he had witnesses of the confrontation. The full video is below. There’s some NSFW language from the suspect, so be warned.