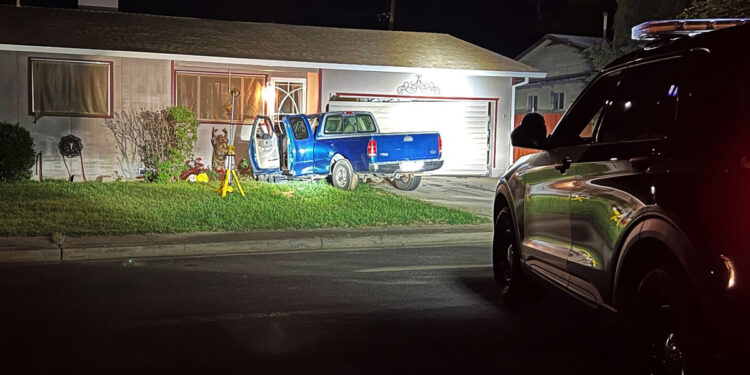 59-year-old Frank Brinkley was shot and killed Sunday evening in Anderson, California when he attempted to ram into a man standing inside the front door of a house. Brinkley was a convicted felon whose criminal record included arrests for drug possession, stalking, criminal threats, and resisting arrest. His ex-girlfriend had a restraining order, which he had already violated multiple times.

The chaos started when Brinkley assaulted a man, then drove to the home of a friend of his ex-girlfriend and crashed his pickup into a fire pit. Witnesses said Brinkley was driving recklessly and had a flat tire as he headed toward his next destination, which was his ex-girlfriend’s home.

When Brinkley got to his ex-girlfriend’s, he repeatedly rammed his truck into the front of her home. Anderson police said he hit the house more than once, including the front door, which was the living room area, and the garage.

A man inside the home grabbed a shotgun and warned Brinkley he would shoot him if he didn’t stop. Instead of stopping his violent attack, he drove his truck toward the resident inside the house’s front door. The resident, fearing for his life, fired his shotgun, striking the criminal in the chest. They pronounced Brinkley dead at the scene.

The Anderson Police Department said, “One of the males within the residence armed himself with a shotgun and told Brinkley if he did not stop his actions, he would be shot. Brinkley then accelerated the vehicle towards the male, who was standing behind the front security screen door. Believing his life and the lives of his family members were in immediate danger of death or serious injury, the male fired one shot, striking Brinkley.”

It’s ironic that next to the home’s front door is a statue of a peaceful buddha with his arms in the air.

Brinkley was prohibited from being within 100 yards of the house by a domestic violence restraining order which he had already broken multiple times. This is another example of why a piece of paper isn’t going to stop a bad guy.

The police department stated, “No arrests have been made at this time. Upon conclusion of the investigation, the case will be forwarded to the Shasta County District Attorney for their review.”

Although you can not legally use deadly force to protect your property in California, the homeowner did not actually shoot at the attacker until he attempted to hit him with his car. From the looks of the picture of the house, the guy is lucky he didn’t end up with the truck in his living room. I can see both sides of the argument on this was one, so time will tell which way it goes.

Using a “Bladed Object” To Rob a Gun Shop Is a Really Bad Idea!

Using a "Bladed Object" To Rob a Gun Shop Is a Really Bad Idea!

Should even be a question.
I am sick and tired of laws that protect thieves and violent jackasses. Attack or threaten to attack a person or steal or damage property should be met with deadly force.