If you need a quick, fairly comprehensive range session, the 99 Drill is an excellent place to start. 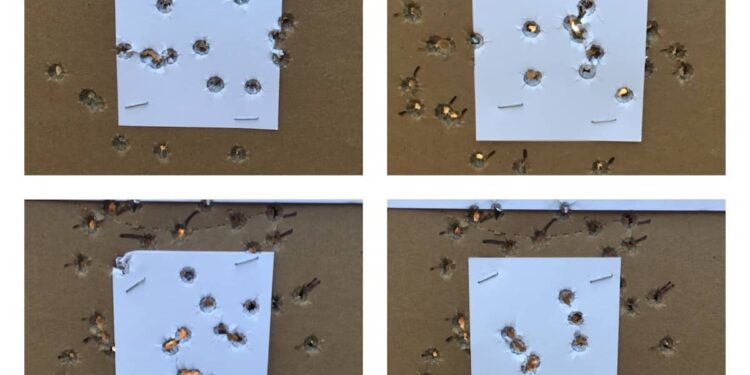 Most drills require a handful or two of bullets and only last a few seconds. Standing on their own, they typically do not make good practice sessions in and of themselves. To create a book practice session, we have to string at least a few drills together, and typically shoot multiple reps on each. There is one “drill” though that is different. It is called the 99 Drill and originates from pistol-training.com, and its associated forum, pistol-forum.com. The drill gets its name from the total number of rounds fired, and it is truly designed to be a standalone, scorable training session. It consists of multiple stages, with multiple reps at each stage. The original version requires a 4″x6″ target, and the hard version calls for a 3″x5″ target. I keep a stash of 3″x5″ cards in my range bag, so I swung for the fence and ended up regretting it.

The PAR times on the first three stages are pretty tight, considering the size of the target. I could easily make the PAR, but could not guarantee the hit. The only stage where I managed to get all the hits was the last stage, at 15 yards. The only reason I was able to pull that off is because as the distance increased, the PAR times become more forgiving.

The drill truly is designed to be a practice session, with an emphasis on working the critical skills associated with the defensive use of the handgun. The draw and presentation to a reasonably sized target is what gets the greatest focus. There is some emergency reload work on the second stage, which still also includes a draw. The final stage is only nine rounds, and is the shortest stage, but focuses on medium distance shooting and is shot at 15 yards. While I understand the importance of reloading skills, I think weighting the final stage a bit more and giving up some of the reload work would make a bit better drill giving the statistical likelihood of needing to perform a slide lock reload.

Fortunately for guys like me, this drill is also adaptable to various skill levels by adjusting the size of the target. In its normal form, with a 4″x6″ target, I think the drill is well suited to the moderately skilled, with the 3″x5″ version best reserved for those with an above average skill level. If a 4″x6″ target is still too tight, I think shooting the drill on an IDPA target and using the -0, or a USPSA target and using the A-zone, is a reasonable compromise until a higher level of skill can be attained.

If you are looking for a challenging, scorable training session, this would be a good route to take. Pick a target size suitable to your skill level, and get to work. The 99 Drill hits all of the important stuff without any real extra fluff. Being able to score it with hits per string also makes it a trackable metric to keep up with performance over time. It almost has everything going for it. If you give it a try, be sure to let us know how you do in the comments.