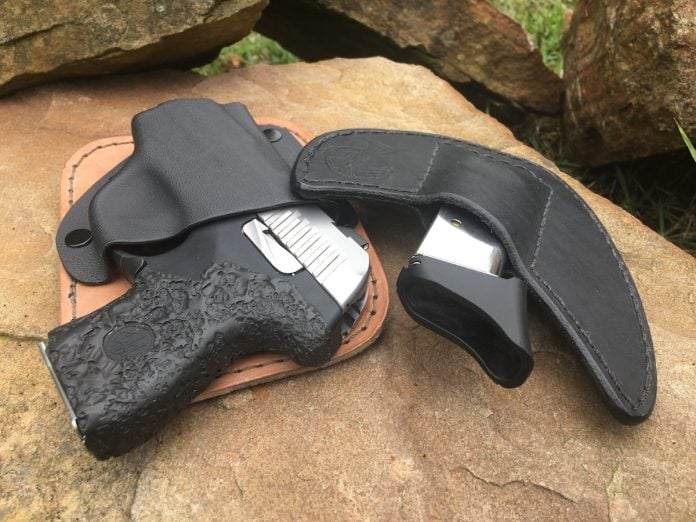 Crossbreed is nearly synonymous with the hybrid holster, a combination of a kydex shell with a leather backing. There are a lot of players in that game now, but only a few have been in it longer than Crossbreed. Applying that same design concept to a pocket holster can have some advantages, but it may also come with some compromise.

When I recently picked up a pocket pistol as a project gun, I started looking for a holster to carry it in my pocket, obviously. I already had a more traditional style pocket holster, and even though the holster carried the gun really well, it didn’t do much to break up the outline of the gun. A gun carried in a pocket that still looks like a gun from outside of the pocket, doesn’t qualify as concealed in my world. So the search began. I wanted something that would mask the presence of the pistol in the pocket. There are a few holsters out there that would do that, but Crossbreed seemed to have the best option.

The Pocket Rocket, as Crossbreed calls it, is built with Crossbreed’s typical construction, a kydex outer shell with a leather backing. The only real deviation is a different shape on the leather backer, the addition of a layer of soft rubber to the outside of the leather to help the holster stay in the pocket, and the absence of clips to wear the holster on the belt. The holster isn’t meant to be unseen, but rather to make the gun appear to be something else. In that regard, it does quite well.

In the pocket, as long as the grip of the gun doesn’t extend past the leather backer, the holster just looks like a square-ish thing in the pocket. I wouldn’t say it quite looks like a wallet, because the edges of the backer are sharp, whereas most wallets are at least a little rounded on the edges. Over time this would likely change as the leather wears in, but given the stiff leather construction to start with, then add a layer of rubber to that, and it will take quite some time before that happens.

Where the holster starts to suffer a bit is in getting access to the gun. As mentioned earlier, the construction is very similar to every other hybrid holster Crossbreed makes, so the kydex shell is riveted to the leather backing. This means at the top of the holster, where the grip is, is a flap of leather that doesn’t like to move out of the way to allow the user to get fingers around the grip of the gun to draw it.

In a perfect world, better access to the grip would allow a more traditional gripping technique, but this isn’t a perfect world. Essentially what has to be done to draw the gun from the holster is the middle and ring finger have to find their way between the grip and leather backer to get around the gun and draw it from the holster, while the index finger hangs out above the leather backer. Fortunately, I have longer fingers and can pull this off pretty well after some practice. Once the gun is drawn from the holster, it comes out of the pocket as it would any other pocket holster. Perhaps this is just a compromise that has to be made with this type of holster, but I am left wanting something a little better still.

The other issue with pocket carry is how to carry spare ammunition. Small guns have correspondingly small ammunition capacities, so while I may not bother with a spare magazine for a gun that holds 15 rounds, a gun that holds 5 or 6 may require a spare magazine. If I just toss the magazine in my offside pocket, it moves around, gets turned around, all kinds of stuff. As a guy who likes to shoot guns well, and that includes reloading them, being able to index the magazine on the reload is of significant value. The Gideon is meant to provide that capability.

To Sum It All Up

The Pocket Rocket fits a very specific task, masking the shape of a pocket carried handgun to prevent the presence of the gun from being so obvious. Where the holster lacks is in maximizing accessibility to the gun. Perhaps it is a worthwhile compromise, perhaps not. I think there is still room for improvement, but this may have to do for now. The Gideon is a homerun. If you need a way to carry a small magazine in a front pocket, definitely check it out.

If you guys have any other holster recommendations that can accomplish what the Pocket Rocket does, drop them in the comments. The search continues.