“Providing students with more than a certificate” 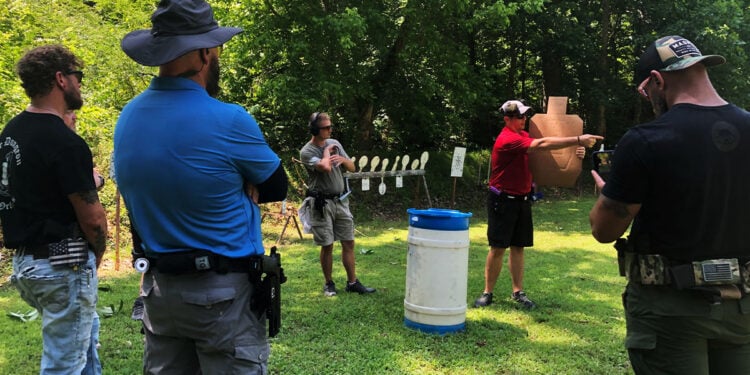 Nestled in the deep woods of Vicksburg, Mississippi, a hidden gem can be found at the private range used by Synergy Shooting Solutions, owned and operated by lead instructor Tyler Tharp. Tyler and I met at Riley Bowman’s Pistol Intelligence class earlier in the year. Speaking after the class, I was invited to take the Red Dot Pistol Performance class later in the year.

Arriving at the range, the first thing to notice is the plethora of steel targets spanning nearly fifty yards wide. Tyler and Stoney Steele, a USPSA Master class shooter and assistant instructor, were already geared up and had the courses of fire ready to go for students. This is something that isn’t always available due to the venue, but it’s refreshing to arrive, and class can immediately begin. Students were ready to go within minutes of the stated start time and preparing to begin the first course of fire.

Immediately, I was once again happily surprised to see the first course of fire as a standardized test for the students. A baseline to track performance throughout the day. This is especially important to the students because it allows them to see hard numbers on their performance from the beginning of class to the end. It is more gratifying for a student to see a 20% performance increase at the end of the day than new knowledge alone. This is even more important for instructors as it allows them to see which students may need more attention than others.

The first course of fire was a common classifier shot at sanctioned USPSA matches. This further increases the student’s ability to track performance because they can now compare their abilities to shooters across the country. That alone is a huge benefit to the students and really gives them the most bang for their buck. Throughout the day, students received individual feedback from both instructors over multiple courses of fire that worked through tracking the red dot through movement and transitions.

Shot timers are invaluable tools. How many times have you heard an individual say that they know they are fast? More than likely, you have heard it at every gun show, and gun shop you have visited, but how fast is fast? Simply put, a shot timer is a small electronic device that tracks your shooting through sound. From draw to first shot, split times between shots, and even setting goal par times to beat, they do it all. If you want to track your performance, this is a must-have. Wouldn’t it be handy to know just how fast you actually are?

Nearly everyone these days has a phone that is capable of recording video. Some phones even record up to 240 frames per second for slow-motion recording. Use that to your advantage.

Want to see if you have a flinch? Record it. Want to see how well you manage recoil? Record it. Video will tell all and allow you to create a physical timestamp of your performance. It is also highly useful to revisit a range trip in the past and see what may have been done differently.

From an instructor’s point of view, video capture allows the student to not only see what is happening but to receive critical feedback on how to address potential issues.

Yes, those ancient tablets used to scribe text into. Those are quite valuable when it comes to recording key components during your practice routine. Walk into any gym and ask a weightlifter if they know what their PR is for a bench press. They will absolutely know that number because they took a record to track their performance. Our brains can only record and recall so much data, so it’s best to jot things down.

The biggest takeaway from the course, as noted by all students, is that movement is a highly underrated aspect of shooting. What may have felt fast recalling a visual memory is clearly not as fast on video. The red dot is one piece of the puzzle, and there is a lot more to it than “align the sights on target and squeeze the trigger straight to the rear.” How many times have you heard that line? When all is said and done, students should be given the tools to diagnose their deficiencies and increase their performance on their own time at the range. That goes beyond simply pulling a trigger. Look at any professional sport, and you will see coaches standing on the sideline with a tablet collecting as much data as possible. Understanding where you started and where you are now is a vital part of improving your abilities as a shooter.

DM is a civilian shooter with a high interest in pistol marksmanship, defensive pistol, and competitive shooting, as well as all things related to concealed carry.