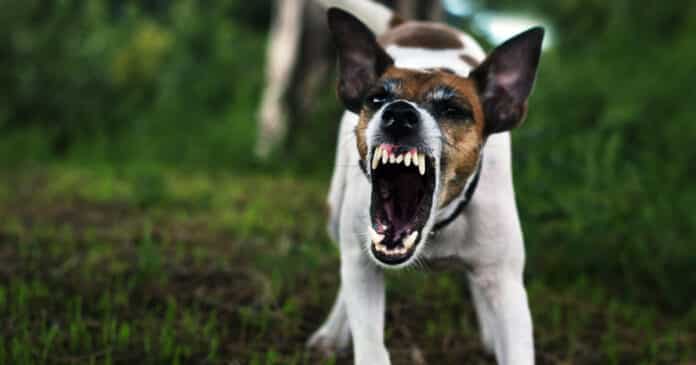 Yes, man’s best friend……..most of the time. Dogs are a big part of American life, and many families and individuals have one, if not several. Few animals are as compatible with humankind as is the Canis Familiaris (domestic species of dog). Yet, dogs are not immune to the propensity towards violence. According to the Center for Disease Control, the United States witnesses about 800,000 dog bites a year that need medical attention. So, while not particularly surprising considering the large percentage of households with dogs, there is no denying that dog attacks are far more common than most realize.

Many dog attacks each year happen within households where the family dog actually attacks a member of the house, often a child, and this threat should not be taken lightly. Some breeds are more aggressive than others and more prone to this, but I would caution the reader not to dismiss this potential danger just because you own a breed of dog that is not known to be aggressive. Breeds like the Pitbull garner a reputation for danger due to their actual mode of attack, and their dangerous attack characteristics should not be dismissed. Still, this attribute does not necessarily make this breed more likely to be aggressive than another. As a family leader, and particularly as a parent, you must be completely cognizant and honest about the nature of your individual dog, no matter the breed. While we love our pets, the safety of children takes priority, and a dog that shows aggressive tendencies should be out of the house no matter how dangerous or innocent the breed is considered.

The Threat of Unfamiliar Dogs in Public

There is no lack of dog attacks each year that sees domestic, and sometimes wild or feral, dogs attack people unknown to them in public places. While a violent criminal actor of the furry variety will not be holding up banks or stealing cars, they can still commit violence and inflict injury, sometimes even death. The danger posed by a large and aggressive dog is considerable, even a physically sound adult can sustain great injury from such a creature, and children are especially vulnerable.

Understand that certain elements in the environment trigger the response from dogs more than others. Anyone who walks a dog in suburban environments knows full well that the most likely point of conflict with another dog in the neighborhood is your own dog on a leash. Dogs like to play with, or sometimes fight with, other dogs. However, this is not the only concern. I have had problems with dogs that are otherwise non-threatening because I was pushing a small child in a stroller. For whatever reason, some dogs get agitated by this object. Understand that the deep-seated hunting instinct, no matter how bread out, is still alive in the brain of dogs, and certain things will conjure an aggressive response from some K9s.

The Nature of Attack

To best prepare for dealing with a dog attack, understand the nature and mechanism of the attack. Breeds like the Pitbull have garnered a reputation for being dangerous because of how they fight; the Pitbull latches on and does not let go. These dogs will sustain massive beating and injury and still not let go. However, the Pitbull is hardly the only dog breed capable of launching a dangerous attack, nor is the Pit necessarily more inclined to do so; any large dog can be dangerous if the individual animal happens to be aggressive in nature. German Shepherds have particularly strong jaws, and Dobermans, Rottweilers, and other specifically bread guard dogs can be more dangerous if they attack but are not necessarily more prone to attack. Each dog is an individual in this regard. All breeds should be given the benefit of the doubt, but every individual dog should be approached cautiously.

Dog attacks are especially dangerous when perpetrated against children. When a small child is attacked, the child usually ends up under the dog, on the ground, with the dog latched on with a bite to the child. This form of attack needs to be ended immediately, or the child can sustain massive injury or death. Such a full-out attack is entirely different than when a dog gets frustrated by an over-bearing child and gives a little nip, then runs away. Any such biting is concerning and should not be tolerated, but a full-out attack is lethal force and can be met with lethal force. We all understand that killing a neighbor’s dog will not win us any love from the neighborhood, but if a child’s life is in the balance, the needed action should be obvious.

Defense Against this Threat

Aggressive dogs usually tip their hand when they approach, and if they plan to attack, they often posture, bear teeth, raise their hackles, and close in aggressively. It is vitally important that you don’t run. You will not be able to outrun a dog, and by running, you trigger their chase instinct. You also give the threat your back when you turn and run. During this aggressive approach, it is often possible to turn the dog away with a loud command voice and standing your ground. OC spray is also an option to short-circuit the approach, and this is where a less-lethal tool should be deployed in this scenario, if possible.

If the dog continues to close and is obviously planning to attack, you are not legally obligated to get bit before taking action, and lethal force is justified. A large and aggressive dog, closing in for an attack, is a lethal threat and warrants a lethal response. For those readers who think killing a dog is not justified under any circumstances, that is asinine. If a dog threatens human life, then the swift killing of the dog is in order, as well as a possible lawsuit against the inept owner who does not control his animal. I love dogs, but a dog that poses a threat to people has no business living in your neighborhood and perhaps no business living above ground.

Defending against a dog attack is hardly simple; dogs have thick skulls, and they can take far more striking and pummeling than can a human, so planning to simply kick the dog or punch it is a fool’s errand. Even striking the animal with a stick, club, or tire iron may not phase it. If a dog is latched on to yourself or someone else, and you are completely unarmed (really?), then fight the instinct to just pound on the dog as it will not be effective. Rather, gouge the eyes, as injury to the eye will force it to release. If armed with a blade, go for the eyes. A tactical pen or kubaton can be useful here: target the eyes with the point of such a tool.

With a firearm, be cognizant that there are likely bystanders, and shooting at a rapidly attacking dog at point-blank range puts anyone around you in danger. If forced to shoot a dog while it approaches, be completely aware of where other people stand or have the potential for moving. An attacking dog is a warranted target, but if you accidentally hit the dog’s owner behind the target, you are in for many problems. Likewise, do you have your own family members, maybe children, who might panic and run in front of your gunfire? Shooting an approaching dog is no small matter, and you must be sure of your target, what is in front of it, and what is behind it.

If you need to shoot a dog off yourself, a contact shot directly into the dog’s spine, pointed downward so that the bullet is most likely to go into the dirt in front of you, may be the best strategy. A contact shot directed into the side of the dog is possible, but you must be aware of who is around you. A round may very well pass through and injure or kill a bystander, so sideways shots are fraught with peril.

If you must shoot a dog off of a child, you face a particularly dangerous scenario. Remember that the dog usually ends up on top of the child. A sideways contact shot is probably safest, but bullets can change trajectory easily, and I would be hesitant to do so. Defense against such threats is one of several reasons that I like to carry a defensive blade. If you carry and are trained with a defensive knife, then it is an option here; rather than risk making a shot against a dog attacking a child, you could opt to cut it’s neck, cutting behind the jaw, starting at the top behind the ear, and cut all the way down to the throat. Following that cut, attack the eyes with the blade to get it off the victim, as an amped-up dog may not even realize it has been cut and is bleeding to death. While probably safer than shooting, bear in mind that a moving and flailing dog is a hard target, and you need to be careful not to cut the victim with the blade if forced to cut a dog off a child or anyone else being attacked.

The possibility of needing to use force to defend yourself or someone else from a dangerous dog should not be underestimated, as such attacks occur with frequency. However, as has been discussed, this is not an easy threat to deal with. The reason for carrying defensive tools is to defend yourself and your loved ones from harm, and harm from furry creatures is certainly among those threats. Prepare accordingly.

With all those posts on the USA Carry forums extolling the benefits of having sheepdogs around the article is a welcome reminder of some of the issues involving sheepdogs. I am also surprised that CCW Badges were not mentioned as the topics of CCW Badges and sheepdogs overlap very heavily.