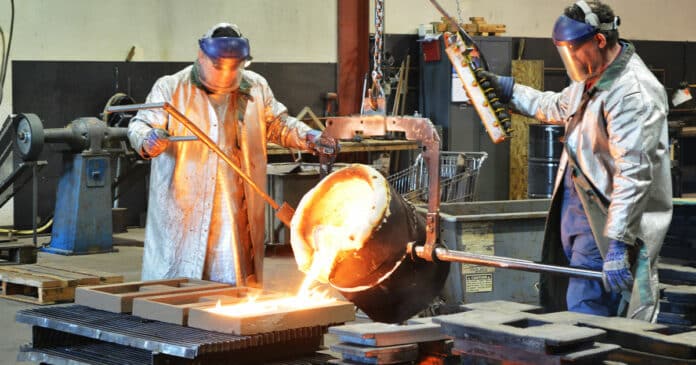 AR barrel steel is the base metal that the finish and coating goes over. As the foundation, it is important up to a point.

There are four main steels used to create AR-15 barrels, the last of which could broadly be called “stainless steel.” As it happens, several types of stainless steel are commonly used in barrel-making, which we’ll cover as well.

There are some differences between each steel that impacts certain aspects of the barrel’s life, which we’ll cover. Therefore, depending on what your usage is going to be, you may want to think about these aspects when selecting a barrel or barreled upper for an AR build.

The Riddle Of Steel

Additional materials are also added, depending on what the steel is going to be used for, such as manganese, phosphorus, chromium, and so on.

Just as with creating any alloy or composite, the manufacturer creates or uses a particular material because it has beneficial properties for the end product.

Alloys are basically recipes for metals. The ingredients and their proportions change the flavor of the dish. The steels you’ll see discussed here are specific recipes for making steel.

Barrel steels have to be fairly resilient to withstand the pressure and heat, but also the rifling process. So, what are they?

Without explaining the entire naming nomenclature, 4140 and 4150 carbon steels are formulas maintained by SAE International, formerly the Society of Automotive Engineers.

SAEI is an engineering society that maintains various standards similar to other bodies such as the ASTM. Materials and their composition are just one area. Anyhow, the 4000 series is a bloc of lower-carbon steels with other elements added.

The composition is close to 1 percent chromium and less than 0.3 percent molybdenum. However, carbon content is the difference between 4140 and 4150, as they have 0.4 percent and 0.5 percent (respectively) carbon content.

The modest carbon content makes them flexible enough to be resilient but typically requires some type of hardening or lining for the bore. Since chromium and molybdenum are the definitive additives, anytime you hear of a chrome-moly or chromoly steel? These are them.

The higher carbon content requires more stress relieving and heat treatment for 4150 steel, making it more expensive but also a bit more wear-resistant than 4140. With that said, however, 4140 has more than enough strength for typical shooting applications.

The typical rifle taken out and plinked with a few times per year will never be stressed in such a way that 4140 steel will be anywhere close to failure of any kind provided some sort of bore lining or hardening treatment.

What makes the difference is the coating or hardening. However, so long as the bore is either nitrided or chrome-lined…barrels of this composition are good to go.

CM and CMV (Chrome Moly Vanadium) is the term Colt used for their AR barrels. CMV is basically 4150 steel with the addition of vanadium.

If you look up the mil-spec documents for CMV barrels (specifically MIL-B-11595E), the composition is literally the same as 4150 steel with some vanadium added.

Now, why that’s important has to do with the nature of vanadium.

Vanadium, a transition metal, gives alloys higher tensile strength but also has the advantage of forming an oxide layer on the surface of the material.

In plainer English, it makes things stronger (actually harder, but never mind) and more resistant to rust than regular steel, which requires a coating or regular treatment of a preservative.

Plenty good for any application, and it should last if you take care of it.

The 400 series are steels with a high chromium content, often around 11 percent. The addition of chromium and sulfur is the definitive characteristic of these stainless steels, as it’s part of what creates the gray appearance.

This series includes the 440 stainless steels, commonly used in knives.

410 Stainless steel (as defined by the SAE) has a high chromium content and a higher sulfur content (with added molybdenum) than standard steel, creating a harder alloy than 4000 series…but also one that’s more brittle at cold temperatures.

Unless the chamber and bore are lined or otherwise treated, it is also more prone to corrosion than carbon steels. However, it is also harder to work with than carbon steel, so 410 stainless barrels tend to be a bit more expensive and made more for precision shooting applications.

416 stainless steel is an SAE formula, but 416R is a proprietary modulation of that formula made by Crucible Industries. 416 has a higher sulfur content than 410 and is easier to work and machine, but is also more brittle and wears very quickly.

Ever notice bargain-basement uppers that have a stainless barrel? Chances are they’re made of 416, and the rifling will wear out in a few thousand rounds.

416R, however, reduces sulfur content and adds more molybdenum. 416R is harder than 410 and can be safely operated at cold temperatures. While it has the hardness, strength, and the same capacity for uber-consistent rifling as 410, it’s easier to work with.

The combination of ease of work, along with enhanced resistance to corrosion and wear, make 416R a very popular material for AR barrels…but also more expensive.

Start naming an aftermarket producer or match-grade or otherwise high-quality pistol barrels, and they use 416R. Wilson Combat, Apex Tactical, you name ’em, and that’s what they use.

Should I Get Nitride Vs. Chrome-Lined?

Another aspect you might consider in an AR build is the coating and barrel lining, specifically a nitrided barrel vs. chrome-lined?

A chrome-lined barrel is electro- or chemically plated, similar to other industrial processes. Typically the bore has to be etched or otherwise scored for uniform adherence to the surface. Once applied, chrome is highly resistant to corrosion, heat and very resistant to wear.

Nitriding diffuses nitrogen into the surface of the metal. Typically, it’s done by a cyanide salt bath; the barrel and the salt are heated until the correct temperature is reached, and into the salt, the barrel goes. After a few hours, the metal has absorbed the nitrogen, and it’s done.

The nitrogen diffuses into the surface of the barrel metal, forming a crystalline structure on the material’s surface. Nitriding makes the material harder and far less susceptible to oxidation.

Chrome-lining is more expensive and requires the barrel to be roughed before lining, which can theoretically reduce mechanical accuracy…but the degree to which it happens is typically small.

Nitriding is cheaper but still incredibly resilient. Most factory barrels of any sort are nitrided, either as the finish or part of a finishing process. Name a popular gunmaker – whether of rifles or pistols – and some or all of their products have a nitrided barrel.

Nitriding is less wear-resistant than chrome lining, but the question is whether it’s to the degree that actually matters in the real world.

For most civilian purposes, it doesn’t. Very few people will ever subject their barrel to enough heat or other stress to even come close to ablating a nitride finish from the barrel.

Chrome lining is essential in certain instances, for instance, if you’re exclusively shooting steel-case ammunition with corrosive primers (only capitalists don’t maintain rifle, comrade) or for a machine gun. And arguably less so in the former case if you actually take care of your guns

Unlined barrels, which are only common with bargain-basement stainless steel barrels, as mentioned previously, should be avoided unless you intend on replacing them as they will quickly wear out.

So, as far as finish goes, nitride is perfectly sufficient unless you’re getting an actual machine gun that you’re going to fire a lot on full-auto. While price tags would suggest lower quality, that isn’t the case…but cheaper steel is still cheaper steel. So invest in good steel first.