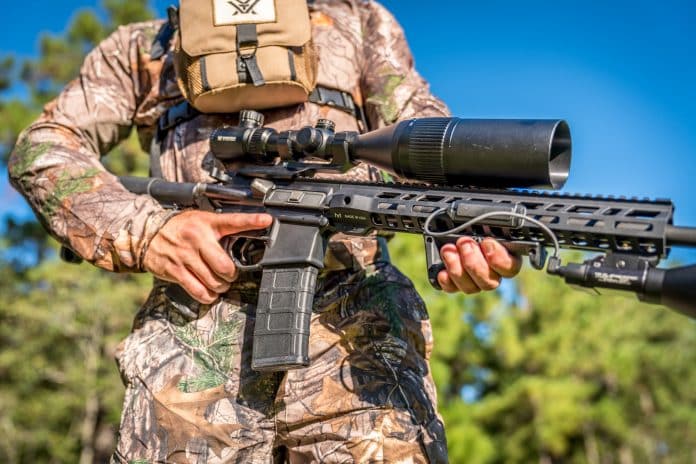 We as a people have evolved over time and rifles have evolved along with us. The modern tactical rifle is now as ready as we are to venture into the woods and bag some game.

When you think about the AR-15, it likely conjures images of rapid-fire military operations, but the truth is that AR-15s are actually perfect for everyday hunting. With their capacity for optimal performance and their ability to carry heavier caliber rounds, it’s hardly shocking that they are being embraced by the contemporary shooter.

Thanks to the rise of rail-mounted rifle laser sights, red dot sights and advanced scopes, more and more hunters are discovering that the AR-15 can serve as an awesome sporting rifle.

With higher barrel twist rates, the AR-15 is able to fire heavier caliber bullets than traditional ARs which is why they have found favor among varmint and predator hunters. Good hunting depends upon ballistic performance and precision.

Hunters need a weapon that can work in tandem with optics and that’s just what the modern AR-15 does.

Whether you’re on bended knee in the back of your pick-up truck, perched inside of an elevated wood tower stand overlooking a deer or camouflaged in the brush for a go at a coyote, the aim of any predator shooter is to get off a lot of shots.

Unlike smaller game such as prairie dogs or squirrels, big league predators demand a bit more action on the part of the hunter.

Before AR-15 hunting became a trend, .223 ammunition was fairly affordable when compared to most other specialized cartridges. This influenced the demand for such rifles, resulting in a significant rise in ammo cost as scarcity of rounds became an issue.

Between consumer demand and the military’s growing dependence on manufacturing facilities and their materials, ammunition grew scant, we saw some serious price gouging on the part of ammo houses.

Fortunately, the modern AR-15 is chambered for a range of ammo and can hold mags with higher capacity, making it easier for hunters to find inexpensive ammunition without compromising precision and performance.

This encompasses everything from 15-round 6.5mm SPC mags to 25-round .22 LR conversion round mags. The sheer versatility of the modern AR-15 makes it ideal for almost any hunting expedition.

For those who are hunting at night or in poor lighting conditions, the AR-15 can be outfitted with red dot sights for better accuracy. Red dot sights are durable and long-lasting with extended battery life. And if you’re hunting in the rain, they’re water-resistant.

Scopes have changed dramatically over the years. During World War II, telescopic sights had evolved considerably, developing to the point where they were able to withstand rugged environments and extensive field deployment.

By the time the Vietnam War rolled around, snipers were capable of making a kill shot at as much as 2,286 meters. Today, assault rifles can reach a formidable 3,500 plus meters courtesy of laser range finders, high-mag scopes and more.

Naturally, any mechanism can break or malfunction, but the AR-15 stacks up well in this department. It is easy to replace parts or customize its design. Parts and accessories are readily available and, as you can see in any number of YouTube videos, the AR can pass mud tests, field reliability tests, et al.

Some social media influencers, such as the NRA-sponsored host of Noir have espoused the AR-15 for home defense and it’s obvious why. It’s the same reason why it’s so effective for big game hunting. The AR gives you the ability to do grenade-like damage to your target, regardless of your shooting environment.

When it comes to predator hunting, that’s an important attribute. The white-tailed deer is the king of the animals and most hunters will tell you how elusive they are. While many sportsmen have embraced the .223 cartridge for its dependability when hunting deer-sized game, some believe that it possesses a margin of error.

The .223 is not ideal for breaking through heavy bones and can often fail to penetrate or deliver hydrostatic shock needed to depressurize a deer’s circulatory system. In fact, it is against the law in some states to even use the .223 caliber.

Luckily, the AR is available in a range of calibers from .243 and .260 Remington to .338 and even big mamma jammas like the .450. If you’re hunting boar or something of a similar size, the .450 or .458 is the way to go. It packs the necessary wallop to take down even the largest game.

Based on extensive research, the following is a compilation of the top-rated AR-15s on the current long gun market.

AR-15s can get pretty pricey, but some of these guns sell for as little as $700 before parts or accessories. In fact, the Aero Precision AC-15M sells for $689.

All of this contributes to why the AR-15 is a great choice for big game hunting. If you want a firearm that will shred your target no matter its bulk or movement, the Armalite is the beast to take down all beasts.