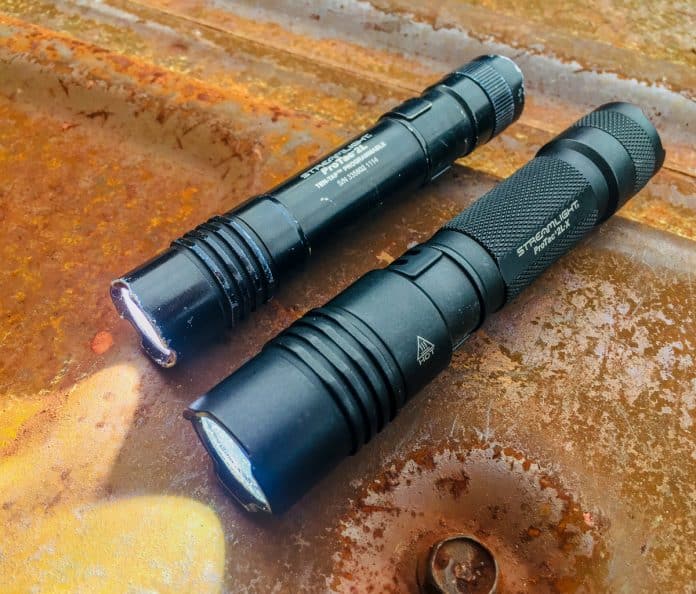 For a gun person (which I am), when we think about everyday carry (EDC), we typically think of that in terms of the gun. However, there are other things to be carried that are just as useful or nearly so. I wrote an article a while back about carrying a tourniquet, and one of the options available on the market to facilitate doing that. Another item that I think many people overlook is a good flashlight. I am not talking about a task light, although that can be handy to have too, but rather a light suitable to be used as a supplement to our personal defense.

With that in mind, there are parameters to follow. I want a bright light, for a couple of reasons. The more light I can produce the more information I have available to me, which is always good. There is a trend right now in certain parts of the firearms community to have “all the lumens” possible. I think there is some merit to that idea, so more power is good, as long as I do not have to carry around a light the size of a baseball bat to do it.

That gets us to the other point, size. I need a light that is small enough to carry unobtrusively, and large enough not to be fumble prone. I also want the battery life to be good. The thing about really bright lights is that they usually run off of relatively expensive batteries that while not hard to find, are not available everywhere. A light that is as bright as the sun, but only last 5-10 minutes is not a very useful light. There has to be a balance.

The Streamlight ProTac 2L-X is what I guess would be called an update of an older Streamlight product called the PT-2L, which I have used as an EDC/Do Everything Light for the past several years. When Streamlight announced that they were adding more horsepower and a flex-fuel capability I was all about it.

The ProTac 2L-X is a 500-lumen powerhouse that can run off of two CR123 lithium batteries or a single rechargeable 18650 Li-Ion cell. In fact, the light gets better runtime off the 18650 than the CR123 batteries. When CR123’s are nearly $2 each, and the light’s runtime is only about 2.5 hours, having a rechargeable option is nice. You can buy the 2L-X with a 18650, or with two CR123’s. If you buy a ProTac 2L-X with the standard batteries and want to switch to rechargeable batteries later, Streamlight 18650 charger kits are available for about $35 which includes the charger and two batteries. Streamlight also makes a USB rechargeable 18650 that is available for around $25.

Is the Streamlight ProTac 2L-X too big, too small or just the right size?

I have been running the ProTac 2L-X for a couple of months now and am generally pleased with the performance of the light. Streamlight redesigned their clip, and it is much more secure than the older version, and also allows for the light to be carried bezel up or down.

The overall size of the ProTac 2L-X is just about perfect. Too short of a light and there can be issues with using it in many of the traditional flashlight shooting techniques because the base of the hand will actually obstruct the lens of the light. The length of the 2L-X ensures that your hand does not block the beam of the light.  This version of the light is also a bit thicker than the standard PT-2L to accommodate the larger 18650 cell. It has an ample amount of knurling around the body of the light. This makes it a bit easier to hang on to.

Beam Quality and Output of the Streamlight ProTac 2L-X

The beam quality on the ProTac 2L-X is pretty good, but I wish the hot spot of the light were a bit more defined and focused. There is a significant amount of spill. At closer ranges the hot spot is noticeable. But once you get out to about 30 yards the hot spot dissipates and the beam is relatively uniform. A bit tighter beam with a little better throw would be preferable in my opinion.

I feel there is more distance that could be squeezed out of the 500 lumens. But Streamlight opted for a wider beam pattern better suited to closer range work. This isn’t to say that the light is useless past 25 yards because it isn’t, far from it. I just have a preference for a bit more range out of the light. I would put the maximum useful range of the light around 100 yards or so depending on environmental conditions.

The output level on the ProTac 2L-X is regulated. But it drops quickly after the first 15 minutes or so of use. It levels out around 350 lumens or so for most of the remainder of the runtime. It drops drastically in the last few minutes until it is entirely out of juice. The initial drop from 500 lumens to 350 or so is a pretty quick and significant drop. It also means that for the majority of the batteries life cycle it actually isn’t a 500 lumen light. I was a bit disappointed in that, but still, I think the light is plenty bright. A flatter power curve would just be nice to have.

The light does use Streamlight’s typical Ten-Tap programming system. I think is an acceptable compromise for those that want a multimode light and those that don’t. If you are not familiar with the system, it has three programming options available. There is a high/strobe/low, high only, or low/high. Once programmed, you switch through the output options by quickly pressing and releasing the tail cap switch. The default mode is high/strobe/low. So the first press gets you high mode. A quick second press gets you strobe. And a quick third press gets low mode. I think Streamlight would do well to add a couple more options, maybe a high/low, or high/strobe. As it is now, I run my light on high only and just accept that if I use the light for task lighting purposes, I will have to buy batteries or recharge batteries more frequently.

While perhaps not a perfect light, the ProTac 2L-X is definitely a good light. It has decent output, maintains a reasonable runtime and has power source flexibility to run standard batteries or rechargeable. The size is nearly ideal. Even though I can point to things here and there that would be nice to have done a little differently or features that would be nice to have, it really is a good light and one I plan on carrying for a long time. If you are in need of a light that is easy to carry and has good output, this is where I would go. The $50 price tag is hard to beat for what the light can do.

Read More: Do You Need a Weapon Mounted Light or Flashlight for Self-Defense?